The Peerless Prognosticator is ON THE AIR!!! -- Game 40: Capitals at Stars, January 4th

The Washington Capitals wrap up their back-to-back set of games to close the week when they visit Big D to take on the Dallas Stars on Friday night.  The Caps head to Dallas fresh off a 5-2 loss to the St. Louis Blues on Thursday night.  Meanwhile, the Stars will be closing a four-game home stand that they hope to end with a 3-0-1 record.

Dallas is a team that has been wildly inconsistent in scoring over the last two months.  Over their last 28 games they have scored four or more goals nine times and have been held to one or fewer goals eight times.  They appear to be on an upswing lately recording five goals in wins over the Detroit Red Wing (5-1) and New Jersey Devils (5-4) on their current home stand.

Alexander Radulov led the Stars in points in December (5-6-11 in 14 games), and three of his five goals were game-winners, one of them in overtime.  He seems to have found a home in Dallas, his 40 goals with the Stars in 113 games over two seasons comparing favorably with the 47 he had in 154 games over three seasons with Nashville to open his NHL career.  His 106 points with the Stars in 113 games already exceeds the 102 points he had in 154 games with the Predators.  He is off to a fast start in the new year as well, recording three assists in the Stars’ first game in 2019, a 5-4 win over New Jersey on Wednesday.  He also has been a load at home, going 7-13-20, plus-5, in 15 home games so far this season.  Radulov is 3-3-6, minus-2, in six career games against the Capitals.

Tyler Seguin had an odd December.  His three goals tied for third-highest on the team, but he managed that number on the basis of 44 shots on goal.  Of 42 forwards recording 40 or more shots on goal in December, Seguin’s shooting percentage (6.8) ranked 35th.  It is part of a broader issue, this season being his worst to date in shooting percentage over nine career seasons.  He has been marginally better at home so far (eight goals on 88 shots, a 9.1 shooting percentage), but it is not the profile of an efficient shooter.  What might concern Caps fans is that he did start the new year with a pair of goals (on eight shots) in the Stars’ win over New Jersey on Wednesday, breaking a five-game streak without a goal. Seguin is 9-5-14, plus-4, in 22 career games against the Caps.

Khudobin is another matter.  Largely a career backup (he has never appeared in more than 36 games in a season and topped 20 only three times in nine seasons coming into this one), he has decent numbers against the Capitals, at least compared to Bishop (4-4-2, 2.76, .910, with one shutout).  And, in his last appearance (December 27th against Nashville), he set a franchise record dating back to the Stars’ incarnation as the Minnesota North Stars by stopping all 49 shots from the Predators in a 2-0 win.  It was a franchise best for number of saves in a shutout.  It was the most saves ever from a Dallas goalie, tying the Dallas mark set by Marty Turco in a 4-3 Gimmick win over the Caps in March 2010 that featured this special moment in the trick shot competition at the 2:20 mark…

Only Jon Casey recorded more saves in a single game for the franchise, stopping 51 of 54 shots in a 5-3 Minnesota North Stars win over Chicago in November 1989. 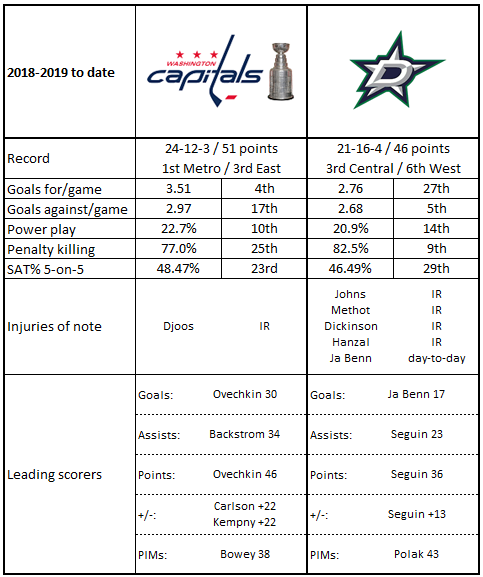 1.  Dallas is one of three teams remaining yet to participate in the trick shot competition this season.  Toronto and Ottawa are the others.

2.  The Stars are among the more difficult teams to play when they are the hosts.  Their 13-5-2 home record is fourth-best (after tie-breakers) in the league through Wednesday, although they are 2-2-1 in their last five home contests.

3.  Going into Thursday’s games, no team had fewer power play chances this season than Dallas (105, tied with Toronto).

4.  The Stars will throw themselves in harm’s way when needed.  Only Ottawa has more blocked shots (715) than Dallas (646) through Wednesday.

1.  Alex Ovechkin scored his 30th goal of the season against St. Louis on Thursday night, joining Mike Gartner as the only players in NHL history to record 30 or more goals in each of their first 14 seasons in the league.  It was just the fourth time in those 14 seasons that the Caps lost in regulation when Ovechkin recorded his 30th goal (9-4-1).

2.  The Caps have won their most recent two games in Dallas, both in overtime, both by 4-3 margins.

3.  Each of the last seven games played by the teams in Dallas were decided by one goal.  The Caps are 3-4-0 in those games, all of the wins coming in overtime.

4.  The last four wins by the Caps in Dallas have come in overtime dating back to December 2001.

5.  The loss to St. Louis on Thursday broke a streak of six straight instances this season in which the Caps won the first game of a back-to-back set.

It has been a rough first half of the season for Devante Smith-Pelly.  But that might be a case of comparing his first half this season with last spring’s postseason in which he went 7-1-8 in 24 games, the last of his goals being the game-tying strike in the Caps’ Stanley Cup-clinching win against the Vegas Golden Knights.  Going into Friday’s game against Dallas, Smith-Pelly has four goals in 37 games, a pace that resembles that of last season in which he recorded seven goals in 75 regular season games.  But he did not dress for the Caps in their loss to St. Louis on Thursday night, and he is without a goal in his last 16 games.  He skated less than ten minutes in three of the last five games for which he did dress.  Smith-Pelly has never been an especially prolific regular season goal scorer, averaging just under 10 goals per 82 games over his eight-year career.  Compare that to his 22-goal pace per 82 games he has in the postseason over his career.  In seven career games against Dallas, Smith-Pelly is 1-0-1, minus-2.

All of a sudden, the Metropolitan Division is a horse race.  The Caps’ lead has been cut to one point over the Pittsburgh Penguins, the Caps holding a game in hand.  With both teams in action on Friday, the Caps are now in jeopardy of falling out of the top spot in the division since they assumed the division lead on November 30th.  The two consecutive losses in regulation that the Caps bring into this game are their first such consecutive losses in a month.  They have not had a three-game losing streak of any kind this season so far.  Now is not the time to start.

Posted by The Peerless at 11:59 PM No comments: