The Peerless Prognosticator is ON THE AIR!!! -- Game 56: Capitals at Kings, February 14th

The Washington Capitals will descend upon the City of Angels for the second of their three-game California (and four-game road) trip on Saturday night and face the Los Angeles Kings.  The Caps faced the Kings less than two weeks ago, goalie Braden Holtby authoring a 4-0 shutout at Verizon Center.

Since then, the Caps have continued on their slow and steady pace, inching closer to the top of the Metropolitan Division with a 3-1-0 record.  In those four games, what is striking about the Caps’ offense is where it comes from.  Evgeny Kuznetsov leads the Caps in points in those four games (1-3-4), and he and Brooks Orpik are tied with Nicklas Backstrom with three assists apiece to lead the club.  Jay Beagle and John Carlson have two goals apiece, tying Alex Ovechkin for the lead among the ten goals scored over those four games.  In all, 14 players have contributed points for the Caps in those four games.  It was the lack of that support scoring that led to their one loss, a 3-1 decision against the Philadelphia Flyers when the only Caps goal was an Ovechkin tally, assisted by Backstrom and Kuznetsov on a power play.

Meanwhile, the Caps continue to get good goaltending, but with a twist.  Braden Holtby is 2-1-0, 2.32, .913 over the four-game span.  While it represents a bit of a cooling off from the torrid pace he had been setting over his previous three games (two shutouts and a one-goal-allowed game), it is still a respectable level of performance.  The twist was Philipp Grubauer getting promoted from Hershey for a start against the Anaheim Ducks.  After a bit of what appeared to be nervousness early on, he settled down nicely and finished up stopping 23of 25 shots and two of three in the Gimmick for a 3-2 win.

The Kings, who had been struggling before meeting the Caps with a 2-4-4 record to close January, have a 3-1-0 record of their own since losing to the Caps.  They have done it with a bit more offensive punch (15 goals in the four games) and also from surprising sources.  Tyler Toffoli took over the team lead in goals with five over his last three games, including a hat trick in the Kings’ 5-3 win over Calgary on Thursday.  Jeff Carter, who has been much more of a finisher than a playmaker over his career, led the team with four helpers over four games.  Right behind him was defenseman Robyn Regehr, who nearly doubled his assist total for the season with three assists over four games.

As a team, the Kings have been much better about tilting the ice in their favor since they lost to Washington. They averaged 37.3 shots per game in those four outings (twice recording over 40) while allowing an average of just 23.0 shots per game.

In goal, Jonathan Quick played all the minutes in the four games, extending his appearances streak to 11 straight contests.  In the four games Quick is 3-1-0, 2.76, .880.  The disturbing thing about Quick’s recent performance is that it not any distinguishable from a stretch amounting to about a quarter of the season (or a third of a starting goalie’s work load).  In his last 22 appearances, Quick is 8-8-5 (one no-decision), 2.96, .877. 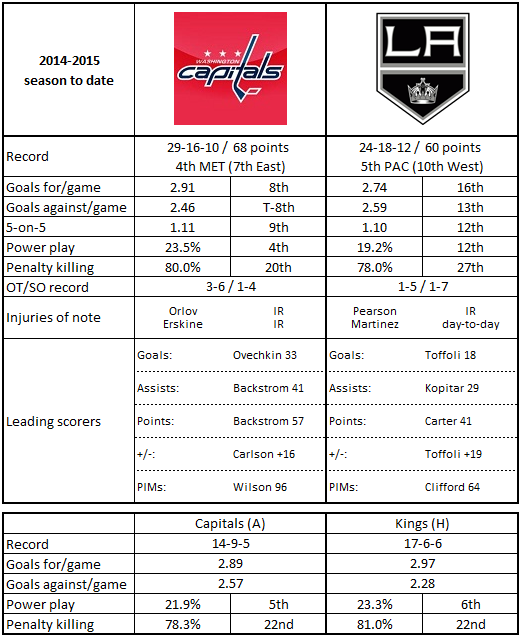 1.  Los Angeles certainly likes the friendly confines of Staples Center.  They have the fourth largest swing in goal differential between that at home (plus-20) and that on the road (minus-12).  The net change is larger than every team except Philadelphia, Toronto, and Tampa Bay.

2.  No team has scored fewer goals in overtime than the Kings.  They are stuck at “1” with seven other teams.

4.  Home cookin’ seems to help special teams, too, at least for the power play.  While the Kings are a measly 13.5 percent in road power play conversions (23rd in the league), they are at 23.3 percent at home (6th).

5.  As for the penalty kill, it gets a lot of work at home.  The Kings have been shorthanded 95 times at home this season, third most in the league.

1. The Caps will come into this game having faced only four shorthanded situations over their last three games. Oddly enough, it is not the first time this season that happened.  The Caps faced four in three games, November 20-26, allowing two goals, both to the New York Islanders in three chances.

2.  Only four teams have allowed fewer first period goals than the Caps (35).  The flip side of that is that the Caps have allowed the seventh-highest share of total goals scored against after the first period (74.1 percent of the total of 135 allowed).

4.  Four Capitals defensemen have appeared in more than 50 games – Brooks Orpik, Matt Niskanen, Karl Alzner, and John Carlson.  Orpik has brought a dimension that the others don’t have.  His 208 hits not only leads all NHL defensemen by a comfortable margin (Toronto’s Roman Polak is second with 179), but he has almost as many as the other three Caps defensemen mentioned, combined (218).

5.  The Caps have the third-best net plus-minus in the league (plus-13).  Maybe that is significant, maybe it’s not, but they neighborhood in which the Caps play here is significant.  The top five are Nashville, the New York Rangers, Vancouver, Anaheim, and the Caps.

We are 17 days from the NHL trading deadline, which means that the heat is going to be turned up on all the Mike Green trade rumors.  He is not making it easy on the Capitals to trade him.  Since he had a six-game streak without a point in late November into early December, Green is 2-19-21, plus-6, in 24 games.  What is almost more amazing is that he has been shooting in a little bit of bad luck.  Those two goals have come on 50 shots, a 4.0 shooting percentage.  His career shooting percentage is 8.3 percent (even if one includes only his post-Norris finalist years it is 6.8 percent).  As it is, despite ranking 110th in total minutes by defensemen this season and 119th in average ice time per game, Green ranks eighth in points per game 0.72), between Erik Karlsson in eighth and Shea Weber in tenth.  He is 2-2-4, minus-1, in seven career games against Los Angeles.

The Caps played a solid game against the Kings in their meeting at Verizon Center on February 3rd, but this is another instance of having a poor record in the west coast half of the all-time series.  The Caps have lost their last four meetings against the Kings in Los Angeles, their last win coming in December 2005 when Jamie Heward scored a pair of power play goals, and Brian Sutherby scored a shorthanded goal in a 3-2 win.

The problem, as it seems to be on California trips, is scoring goals.  The Caps have only six goals in their four straight losses to the Kings in Los Angeles.  Of more recent concern, the Caps had scored only five goals in three road games before breaking out with five in their win over San Jose on Wednesday.  Getting the kind of secondary scoring the Caps had in that win in San Jose is something that can’t be counted upon on a night-by-night basis (it is secondary scoring for a reason), but it is nice to know they have it in them to get it.  In this one, the stars might need to show up.

Posted by The Peerless at 6:43 PM No comments: