The Peerless Prognosticator is ON THE AIR!!! -- Game 27: Canucks at Capitals, December 11th

The Washington Capitals return home on Sunday after a brief trip to upstate New York, hosting the Vancouver Canucks at 5:00 pm at Verizon Center.  It will be the Caps' first contest against a Western Conference club since they beat the St. Louis Blues, 4-3, back on November 23rd.  It will also be the second and final meeting of the season between the clubs, the Caps winning the first meeting, 5-2, in Vancouver on October 29th.

Washington comes into this game looking to extend a three-game winning streak to four, which would make it the longest winning streak of the season since the Caps peeled off five straight wins form October 29th through November 5th, a streak that started with that win in Vancouver.  On the other hand, the Canucks have struggled ever since they opened the season with a four-game winning streak.  Since that big open, Vancouver is 8-13-2, and they are wobbling back and forth lately, largely alternating wins and losses over their last 14 games (8-5-1).

The Canucks have struggled to score goals (26th in the league in scoring offense), reflected in the fact that they have yet to have a player reach the ten-goal mark, one of ten teams without one to date. Daniel Sedin and Bo Horvat lead the team with eight goals apiece.  Daniel Sedin, the goal-scoring left wing half of the Brothers Sedin, is closing in on a personal milestone.  Although he has 363 career goals, 134 more than his twin brother Henrik, he needs just three assists to reach the 600-assist mark.  When he reaches that mark, he will be just the second player in Canuck history to reach 600 assists, brother Henrik having already passed that mark (758).  Sedin comes into this game with goals in two of his last three games and points in four of his last five contests (2-3-5).  In 17 career games against the Caps, Daniel Sedin is 7-6-13, plus-3.

While Daniel Sedin is skating in his 16th NHL season, Bo Horvat is in the midst of just his third season in the league.  The former ninth-overall draft pick (2013) is still looking for his breakout year, but his eight goals this season is half way to his career best 16 goals set last season in 82 games, and he is on a pace to finish with 24 goals.  One area in which Horvat’s numbers have improved immensely is in his plus-minus figures.  Last season, Horvat finished 897th of 898 skater having dressed for at least one game with a minus-30 (Mikkel Boedker was minus-33 with two teams).  This season, he is just minus-1 through 27 games and hasn’t had a “minus” game in three weeks (minus-1 in a 4-3 overtime loss to the Chicago Blackhawks on November 19th).  In the eight games since in which he played, Horvat is 2-4-6, plus-3, although he will come into this game on a four-game streak without a point, pending Vancouver’s game against the Florida Panthers on Saturday night.  Horvat is 1-2-3, minus-2, in four career games against the Caps, his goal coming in the Canucks’ 5-2 loss to the Caps last October.

Vancouver has gone through nine defensemen so far this season, only three of them appearing in all 27 games through Friday.  One of the three is Ben Hutton, who happens to lead the blueliners in goals scored (three) and is tied for the lead among defensemen in points (seven, with Luca Sbisa).  Those three goals are a career high for the second-year defenseman (he had one last season), but his seven points lag behind the pace he set in his rookie season (25 points in 75 games).   His offense has perked up a bit lately, though.  After going 1-1-2, minus-9, in his first 17 games, Hutton is 2-3-5, minus-2, in his last 10 contests.  He is without a point and is minus-2 in three career games against Washington. 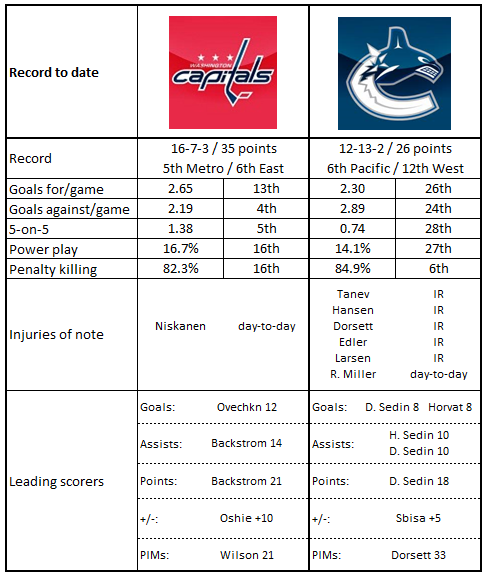 1.  Of the eight Vancouver wins in their last 14 games, four of them have come in extra time, two of them in the Gimmick.

2.  Of the nine defenseman the Canucks have employed this season, all of them have at least one point.  Even Alex Biega, with just two games played so far, has an assist.

3.  No team has fewer wins when scoring first in games than the Canucks.  Their five wins are tied with Carolina and Colorado going into Saturday’s games.  Worse, Vancouver has scored first only eight times in 27 games.  Only the Avalanche have done so fewer times (seven in 25 games).

1.  Going into Saturday’s games, the Caps had 35 standings points, one of six teams in the East with that many or more.  The misfortune of the Caps was to be in the Metropolitan Division, which had five of those six teams.

2.  Only the Carolina Hurricanes and New York Rangers have fewer fighting majors (two apiece) than the Caps (three, tied with four other teams).

3.  If faceoff volumes are an indicator of game flow, the Caps don’t suffer many stoppage that result in faceoffs.  Only five teams have taken fewer draws than the Caps so far this season.

4.  The three-goal win by the Caps over Buffalo on Friday night was the first time the Caps won by three or more goals since beating Pittsburgh, 7-1, on November 16th.   Of the Caps’ six wins since that game, four of them have been by one-goal (two in overtime).

5.  Adjusted for score and venue, the Caps have the second-best Corsi-for at 5-on-5 in the league (53.44 percent), trailing only the Boston Bruins (54.56 percent; numbers from Corsica.hockey).

On Thursday, Ryan Miller took himself out of the game against the Tampa Bay Lightning due to what was reported as an ankle injury.  It left his availability for the weekend games in Florida and in Washington in doubt.  With back-to-back games on the weekend schedule, the Canucks recalled Thatcher Demko from the Utica Comets of the AHL in the eventuality that Jacob Markstrom could not play both sides of the back-to-back set of weekend contests.  Markstrom played only six minutes in the 5-1 win over the Lighting, but appearances in three games in four days, especially when the back-to-backs are on the road with starting times only 22 hours apart appears to be a stretch (Markstrom got the start against Florida on Saturday night).  Then there is the fact that Markstrom is just 3-2-1, 3.35, .882, in his last seven appearances.

Demko is an interesting case.  He is in his first professional season after a fine career with Boston College.  In three seasons at the collegiate level he won 62 games and in his last season posted a 1.88 goals against average with a .935 save percentage.   In 14 games with the Utica Comets he was 7-5-1, 2.59, .909.  Perhaps having the parent club’s situation on his mind, he allowed four goals on 28 shots in a 4-3 loss to the Binghamton Senators on Friday night.

Surely you remember Alex Ovechkin.  Seven-time 50-goal scorer, six-time Maurice Richard winner, the greatest goal scorer of this generation.  At the moment, though, Ovechkin is tied for 11th in the league in goals scored (12), one of those players being teammate Marcus Johansson.  And, he has gone seven games without a goal, his longest streak since he went eight games without a goal in Games 30-37 of the 2010-2011 season (perhaps not coincidentally, the season in which he scored the fewest goals in his career -32).  His shot frequency is a bit off in this streak his 24 shots working out to an average of 3.43 per game, and only once – in Friday’s game against Buffalo – did he have more than four shots on goal after having more than four shots on goal in eight of his first 19 games.  His power play goal scoring has dropped off considerably, too, with just four power play goals for the season (tied for 17th) and only two in 16 games since November 5th.  Ovechkin is 6-2-8, minus-5, in 13 career games against the Canucks.

Three straight wins is a good thing, but two of those wins came in overtime, and the third was one-goal game 14 minutes into the third period.  It has been almost a month since the Caps had a truly dominating performance that left do room for doubt in the third period, that being the 7-1 win over the Penguins on November 16th.  Since that lopsided win, the Caps are 6-3-1 in ten games, but they are doing it with defense and goaltending.   The 2.4 goals per game the Caps are scoring are being supported by a 2.1 goals per game scoring defense.  If the Caps can cobble together more, and more consistent offense, they could go on a nice run.  However, ten games at this scoring pace is a good chunk of the season, too.  The Caps can raise that scoring number, but to expect it to happen might not be a well-founded thought at the moment.  Perhaps facing a team with an unsettled goaltending situation will provide a remedy.

Posted by The Peerless at 7:46 PM No comments: