It is that time once more Caps fans. Shortly after 7:00, Eastern Daylight Time, Shorty – uh, Commissioner Gary Bettman – will scamper to the stage on his little commissioner feet, clamber up onto the stack of Los Angeles area Yellow Pages set behind the podium, adjust the microphones, take a sip of Commissioner Juice, clear his throat, waste our time by telling us how happy he is that everyone is here and that the Chicago Blackhawks finally won a Stanley Cup, and then announce in clear, squeaky voice… 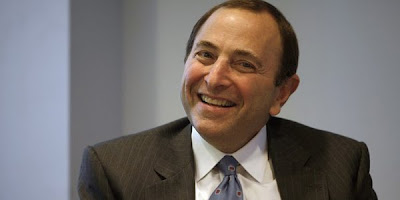 “Ladies and gentlemen, with the first pick in the 2010 entry draft, the Edmonton Oilers select…

2. Boston Bruins: Tyler Seguin (C), Plymouth Whalers (63 GMS, 48-58-106)
What do the Bruins need?... Clones of Phil Kessel with which to make more deals with Toronto. Fun fact: “Tyler Seguin” is an anagram for “Sultry Genie.” The Bruins can only hope.

3. Florida Panthers: Erik Gudbranson (D), Kingston Frontenacs (41 GMS, 2-21-23)
What do the Panthers need?... Mr. Peabody and Sherman to show up with their Wayback Machine to transport the club back to 1996. “Gudbranson” does not mean “Good Fiber” in Swedish. I think Nicklas Backstrom taught me that.

4. Columbus Blue Jackets: Cam Fowler (D), Windsor Spitfires (71 GMS, 25-44, 69)
What do the Blue Jackets need?... Jim Tressel as head coach? Bob McKenzie at TSN describes Fowler thusly, “Cam Fowler has some star qualities in terms of offensive ability and how he's able to use his world class skating ability to take pucks up the ice and get his team out of trouble.” He will certainly have opportunities to show that “getting out of trouble” talent.

5. New York Islanders: Brandon Gormley (D), Moncton Wildcats (58 GMS, 9-34-43)
What do the Islanders need?... 2021 to get here as fast as possible (it’s a Rick DiPietro thing). Gormley can’t help with that, but he is described as a “safe” pick. Got another Bob McKenzie comment here… “He's not big, but he's not small. He's not overly physical but he's not uninvolved. He's not a pure offensive point producer but he's not a one-dimensional defensive guy either.” I’m going to bet his nickname will not be “Gorms,” but rather “Goldilocks.”

6. Tampa Bay Lightning: Nino Niederreiter (LW), Portland Winterhawks (65 GMS, 36-24-60)
What do the Lightning need?... We don't have enough space for that.  Niederreiter has the chance to be the greatest left wing from Switzerland since Reto Von Arx.  Playing with Steven Stamkos should make that pretty much a lock.

7. Carolina Hurricanes: Brett Connolly (RW), Prince George Cougars (16 GMS, 10-9-19)
What do the Hurricanes need?... Someone to move the Caps to the Atlantic Division so they’ll have a shot? Seems Connolly has had some hip problems. Hey, people my age are supposed to have hip problems, not a teenager.

8. Atlanta Thrashers: Ryan Johansen (C), Portland Winterhawks (71 GMS, 25-44-69)
What do the Thrashers need?... Name tags for all the new players.  Johansen is described as a big, rangy, "Joe Thornton" type of center.  Does that mean he'll spend a few years in the East, get traded to a West coast team and spend the rest of his career in a wilderness of disappointment?

9. Minnesota Wild: Jeff Skinner (C), Kitchener Rangers (64 GMS, 50-40-90)
What do the Wild need?...A team as wild as the crowds that stuff Xcel Energy Center.  Skinner scored 50 goals at Kitchener.  The Wild have never had a 50-goal scorer.  The irresistable force of the draftee meets the immovable object of "Wild" offense.

10. New York Rangers: Alex Burmistrov (C), Barrie Colts (62 GMS, 22-43-65)
What do the Rangers need?... Less obnoxious fans? Larry Brooks and John Tortorella in a pay-per-view death match? A clue? Let’s just say, “a lot.”  Russians are described as "enigmatic."  Burmistrov will fit right in on a team that has Wade Redden.

11. Dallas Stars Derek Forbort (D), USNTDP (26 GMA, 4-10-14)
What do the Stars need?... Someone to tell me why they drafted for Kari Lehtonen. We’re still trying to figure that one out. As for this pick, go ahead, say “Forbort” five times fast.

13. Phoenix Coyotes: Jack Campbell (G), USNTDP (11 GMS, 2.21, .917)
What do the Coyotes need?... A freakin’ break. It didn’t take as long to wait for Godot as it has to figure out where this team will call “home.” In the meantime, they are getting the latest franchise goalie to go high in the first round, like that’s been a way to go (see: Blackburn, Dan; Montoya, Al; DiPietro, Rick; Price, Carey; Lehtonen, Kari; Leclaire, Pascal; Krahn, Brent; Finley, Brian; Storr, Jamie… you get the point).

14. St. Louis Blues: Austin Watson (RW), Peterborough Petes (52 GMS, 20-34-54)
What do the Blues need?... Someone to convince Ilya Kovalchuk that St. Louis is the St. Petersburg of the Midwest. As for Austin Watson, I have but one question. What IS a “Pete,” anyway?

15. Florida Panthers: Mark Pysyk (D), Edmonton Oil Kings (48 GMS, 7-17-24)
What do the Panthers need?... Uh, didn’t we already do this? We are so disappointed that the Panthers are picking here instead of Boston.  The Bruins would HAVE to have drafted this guy, if only to hear Beantown fans walking out of a game saying tone another, “That Pysyk was a Pyssah tonight…hey, wehd I pahk the cah?”

17. Colorado Avalanche: Tyler Pitlick (C ), Minnesota State (38 GMS, 11-8-19)
What do the Avalanche need?... Someone to redesign those uniforms; that isn’t an avalanche on the logo, it’s a swirl cone from Dairy Queen. What are the odds Avs fans hope this kid’s nickname is “Hat Trick.”

18. Nashville Predators: Emerson Etem (C ), Medicine Hat Tigers (72 GMS, 37-28-65)
What do the Predators need? A bunch of forwards to match the talent of their young defensemen. We’re thinking this guy has to be drafted in this spot, just because we want to hear some announcer go “Etem from Erat.”

19. Los Angeles Kings: Quinton Howden (LW), Moose Jaw Warriors (65 GMS, 28-37-65)
What do the Kings need?... Uh, they play in a land where six-foot blondes grow on trees, and you ask “what do they need?” As for this pick, it is a reality show in waiting… Boy from Moose Jaw lands in L.A., sort of like "Northern Exposure" in reverse.

20. Pittsburgh Penguins: Nick Bjugstad (C ), Blaine/MS-HS (25 GMS 25 GMS, 29-31-60)
What do the Penguins need?... The earth to open up and swallow Consol Energy Center into its bowels just as the puck drops on opening night against the Flyers. The whole “two birds with one stone thing.” As for this selection… he’s accelerating his class load and taking classes at a community college to be able to play for the University of Minnesota a year ahead of schedule. I HATE kids like this… smart AND they can play hockey. You know he’s dating the prom queen.

23. Buffalo Sabres: Jaden Schwartz (C), Tri-City Americans (60 GMS, 33-50-83)
What do the Sabres need?... garlic and melted butter (it’s a snail thing). I keep reading the name “Jaden Schwartz,” and I can’t help but thinking he should be the hero in the remake of “Spaceballs.”


24. Chicago Blackhawks: Riley Sheahan (C), Notre Dame (37 GMS, 6-11-17)
What do the Blackhawks need?... A jar of silver polisher. Riley Sheahan from Notre Dame. I half expect Pat O’Brien to rise from the grave dressed as a priest to make the selection.

25. Vancouver Canucks: Jarred Tinordi (D), USNTDP (26 GMS, 4-5-9)
What do the Canucks need?... An exemption from the NHL from any road trips of more than three games for the next five years. Everyone in North America with a keyboard and a desire to have a mock draft has this kid going in this space. Who are we to argue?

26. Washington Capitals: Brock Nelson (C ), Warroad HS (25 GMS, 39-34-73)
What do the Caps need?... Someone to sponge away the memory of last April? I used to wrestle in high school, and I think one of the first things our coach did was school us in the fine art of the Brock Nelson. Hopefully this kid can tie up opponents in a similar manner and pot a few goals.

27. Montreal Canadiens: John McFarland (C), Sudbury Wolves (64 GMS, 20-30-50)
What do the Canadiens need?... Someone to light a fire under Carey Price’s improbably big pants! As for this pick, love those sports figures he does.


29. Anaheim Ducks: Alexander Petrovic (D), Red Deer Rebels (57 GMS, 8-19-27)
What do the Ducks need?... Nope, still haven’t thought of it. Alexander Petrovic of Red Deer. Sounds like the sort of guy who could fight Conan the Barbarian.


30. Chicago Blackhawks: Beau Bennett (RW), Penticton Vees (56 GMS, 41-79-120)
What to the Blackhawks need?... Another jar of silver polisher. Wasn’t Beau Bennett the second cousin of Ashley Wilkes in “Gone With the Wind?”

Thanks, everybody... drive safely!
Posted by The Peerless at 6:15 AM No comments: