“Who in the world am I? Ah, that's the great puzzle.”
-- Lewis Carroll

OK, here is a quiz. Who does not belong in this group? Jonas Brodin, Justin Schultz, Dougie Hamilton, Danny DeKeyser, and Steve Oleksy?

Give up? It’s a trick question. They all belong. All five players are among the 10 defensemen in 2013-2014 who played in at least 61 games through their second season in the NHL and who in their first two seasons in the NHL and had at least 19 points. What is more, the Washington Capitals’ Oleksy has the best plus-minus of that group (plus-16) with the exception of Dougie Hamilton (plus-26).

Oh, Steve Oleksy? You forgot who he is? He was seventh among defensemen for the Capitals in games played (33), fifth in points (10), best in plus/minus (plus-7), third in penalty minutes (53), second in shooting percentage (7.4), and had one of five game-winning goals by defensemen for the Caps in the 2013-2014 season.

Oleksy also did not play in any of the Capitals’ last 40 games after January 4th.

The Capitals were 16-12-5 in games played by Oleksy in 2013-2014 (a .561 standings points percentage), 22-18-9 in games Oleksy was absent (.541 standings points percentage). We do not mean to suggest that Oleksy was a difference maker, but on a team whose depth chart at right defense looked like: John Carlson, Mike Green, Connor Carrick (with a sprinkling of Patrick Wey and Tyson Strachan); it is hard to fathom how it was that Oleksy was more or less banished for the last half of the season. It is made harder to reconcile when one notes that at the time he was relieved of his place in the lineup Oleksy was third among Caps defensemen in scoring (behind Green and Carlson, and only five points behind Carlson), and he led the team in plus-minus (plus-7). 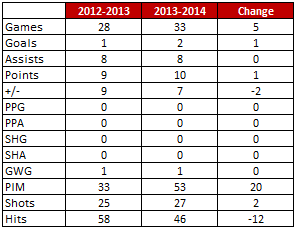 Cheerless’ Take… There seems to be a rambunctious streak in Steve Oleksy’s play that might have gotten him in deep with the coaches from time to time. He, John Erskine, and Tyson Strachan were the only defensemen for the Caps to have more penalty minutes than games played this season, and his penalties drawn to penalties taken differential was a minus-8, third worst on the team.

Game to Remember… December 8th versus New York Rangers. Going into their game against the New York Rangers on December 8th, the Capitals suffered shutouts by Ranger goalie Henrick Lundqvist in each of their previous three meetings. Lundqvist would extend the shutout streak to 202:28 before Jason Chimera ended the drought 2:28 into the second period to give the Caps a 1-0 lead. Steve Oleksy picked up the secondary assist on that goal when he kept the puck in at the right point and fired it on net, Chimera finishing the play by batting in a loose puck at Lundqvist’s side. Oleksy called his own number just 25 seconds later, taking a feed from Jay Beagle and wristing a floater through a screen and over Lundqvist’s left shoulder. It would be the game-winning goal in the Caps’ 4-1 win over the Rangers, the first game-winning goal of Oleksy’s NHL career.

Game to forget… January 4th versus Minnesota.  The Caps were in a slide when they set off for the Twin Cities to face the Minnesota Wild. Losers of three straight and five of their last six contests, the Caps were looking for their first win of the new calendar year in Minnesota.  It looked good early, Washington getting goals 13 seconds apart in the first period to take a 2-0 lead.  Then the roof fell in on them.  The Wild scored three goals in a 5:22 span of the second period to take a 3-2 lead.  Mike Green got the Caps back even at the 13:50 mark, but at 15:32 Mikhail Grabovski took a delay of game penalty for shooting the puck over the glass.  On the power play Keith Ballard sent the puck to the net where it was deflected by Jason Zucker.  The puck flipped up, fluttered, and dropped behind goalie Braden Holtby.  Steve Oleksy was at the top of the crease cleaning out Nino Niederreiter but was powerless to get into position to try to sweep the puck away.  It would be the game-winning goal in a 5-3 Wild win.  It would be Oleksy’s last game of the season with the Caps.

Somewhere deep in the bowels of the Capitals brain trust (how’s that for generous use of anatomical imagery) it got in someone’s head that there were better options available than Steve Oleksy on the third defensive pair.  Connor Carrick, who was sent down to Hershey after playing in three games in October, was recalled and dressed in Oleksy’s place in the Caps’ first game after that loss to Minnesota.  Carrick finished the season playing in 31 more games with the big club while Oleksy was first a healthy scratch for seven games with the Caps, then was placed on waivers (where he was unclaimed) before being returned to Hershey to play 30 games with the Bears.

It made for something of an odd season for Oleksy in what was a very unsettled season on the defense.  Making it even stranger is the unsettling feeling that even though the Caps seemed to be better with Oleksy in the lineup than with many of the alternatives, there wasn’t just a feeling that he fit a profile of what the Caps wanted at that position.  Oleksy might not have been an answer to the defensive depth problems on the Caps if they were a contender, but on this team?  It is one of the puzzles of the 2013-2014 season.

Posted by The Peerless at 6:05 AM No comments: