The Peerless Prognosticator is ON THE AIR!!! -- Game 25: Capitals at Jets, December 5th

The Washington Capitals take their six-game winning streak west to Winnipeg where they will face the Jets on Saturday afternoon (note: it’s a 3:00 start).  The Capitals will head into this contest as the hottest team in the league, their six-game winning streak being the longest active streak among the 30 teams and their 8-1-1 record over their last ten games tied with the Dallas Stars for the best such current ten-game record.

Winnipeg, on the other hand, is perhaps thankful to be treading water in recent games.  Their 4-3-0 record over their last seven games is a substantial improvement over the six-game losing streak (0-5-1) that preceded it.  It has been enough – barely – to lift the Jets to .500 for the season (12-12-2).

On an individual level, Caps fans would recognize the leading scorer in this recent seven-game stretch.  Mathieu Perreault is 2-6-8 in his last seven games. The scoring spurt was a welcome improvement for Perreault, who was 1-10-11 in his first 19 games this season.  As it is, Perreault is on a pace to finish with his best season to date in points per game (0.73), a statistic he has improved on in each of the last three seasons (0.44 in 2012-2013, 0.62 in 2013-2014, and 0.66 last season).  Perreault has faced his old team three times and has a pair of goals in those contests.

Mark Scheifele is tied for the team lead in goals (four) over this seven-game stretch and has seven points overall.  It hasn’t been the case of slow and sure wins the race with Scheifele, though.  He has three-point games in the first and last games of this span of contests, one against the Vancouver Canucks in a 4-1 win on November 18th, and another against the Toronto Maple Leafs in a 6-1 win last Wednesday in Winnipeg’s most recent game.  In six career meetings with the Caps, Scheifele is 1-2-3, minus-1.

As for goaltending, it has been something of a challenge.  Ondrej Pavelec was limping along at 5-6-1, 2.82, .908 when he went limping off with a knee injury in a 3-2 win over the Arizona Coyotes on November 21st.  Then it was Michael Hutchinson getting the call, but he hasn’t exactly wowed anyone with a 5-6-1 record of his own, accompanied by a 3.09 goals against average and a .901 save percentage.  Then there is Connor Hellebuyck.  He has wins in his first two NHL appearances, a 14-save effort in a 3-1 win over the Minnesota Wild on November 27th and a 32-save gem in a 6-1 win over the Toronto Maple Leafs last Wednesday.  The odd thing about Hellebuyck is that he has a pair of one-goal allowed appearances in his first two NHL games when he had only two such games in ten games with Manitoba in the AHL, one of those being an overtime loss. 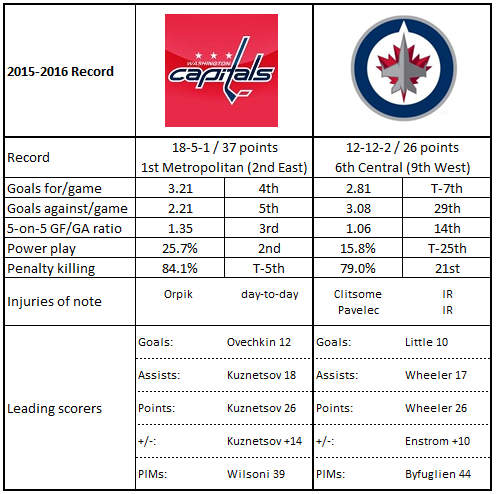 2.  Scoring first is something unfamiliar to the Jets.  No team has opened the scoring in games fewer times than Winnipeg (eight), and only three teams – Carolina, Toronto, and Vancover – have fewer wins when scoring first (five apiece) than the Jets (six).

4.  When the Jets lose, they often do not make a mystery of it.  Half of their 12 losses in regulation have come by three or more goals.  Only three teams – Calgary (9), Carolina (9), and Arizona (7) have more such losses than the six by the Jets.

5.  Winnipeg is not a bad possession team. At 5-on-5 they rank 11th in Corsi-for percentage (51.7).  Those numbers do not differ much in other situations.  The Jets rank tenth in score-adjusted Corsi-for (51.7) and rank tenth in close score situations (50.8; numbers from war-on-ice.com).

1.  The Caps head to Winnipeg having allowed more than 30 shots in three consecutive games, the first time they have done so since allowing more than 30 in four straight contests in Games 68-71 last season.

2.  Goal margins do not seem to matter to the Caps in individual games.  They rank third in winning percentage in one-goal games (.700), fifth in two-goal games (.800) and fourth in games decided by three or more goals (.778).

4.  Scoring against the Caps in the long change has been a challenge for opponents.  No team has allowed fewer second period goals than the Caps (12).

5.  Those shots allowed per game creeping up in recent games is part of a larger possession issue for Washington.  They have slipped to ninth in overall Corsi-for at 5-on-5 (51.9 percent), seventh in score-adjusted Corsi (52.7), and 12th in close score situations (50.7; numbers from war-on-ice.com).

Since Dustin Byfuglien was traded to the Atlanta Thrashers – now the Winnipeg Jets – by the Chicago Blackhawks in June 2010, only Erik Karlsson has more points among defensemen, and only Shea Weber has more goals scored.  He comes into this game with the third highest goal total among defensemen in the league (seven), trailing only Justin Faulk (eight) and Brent Burns (nine).  He is also on a four-game points streak (1-4-5), his longest points streak of the season and longest since a five-game streak a year ago (November 28- December 9, 2014).  In 24 career games against Washington, Byfuglien is 5-8-13, minus-9.

John Carlson is a top-ten point producer among defensemen in the NHL, tied for seventh with 18 points through Thursday’s games. However, he is struggling in his possession numbers.  Among 179 defensemen to have played in at least 200 5-on-5 minutes through Thursday’s games, Carlson ranks 107th in Corsi-for (49.1; numbers from war-on-ice.com) and is last among the six Caps defensemen who have appeared in 200 or more 5-on-5 minutes.  It translates to a less-than-satisfying 2.09 goals for per 60 minutes at 5-on-5 and 2.09 goals against per 60 minutes.  As the minutes leader on the team (24:11 per game), one hopes those numbers improve.  In 23 career games against Winnipeg, Carlson is 1-6-7, plus-6.

The Jets are an odd team, especially at home.  They opened the season allowing 17 goals in their first five games at MTS Centre, but in their last six games on that ice sheet they have allowed just 12 goals.  The wild card there is goaltending, which has been a bit deceiving, at least on home ice.  Connor Hellebuyck allowed one goal in his only appearance on home ice, that coming in the 6-1 win over Toronto in Winnipeg’s last contest. Michael Hutchinson has only two starts at home since October and allowed a total of just four goals in those appearances.  What might be perceived as a weakness for Winnipeg – goaltending – might not be such a weakness after all.  The Caps should be prepared for a different team than the one they defeated in Washington ten days ago.

Posted by The Peerless at 9:07 PM No comments: 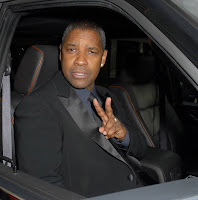 The Washington Capitals and the Montreal Canadiens met on Thursday night in a battle of two of the hottest, if not the outright best teams in the Eastern Conference.  Washington entered the contest on a five-game winning streak, and the Canadiens took the ice with points in six consecutive games.  At the final horn it was the Capitals extending their winning streak to six games with a 3-2 win.

The Caps got on the board first, early in the first period.  It was a classic instance of forechecking pressure in the Montreal zone that created the opportunity.  Michael Latta consested Nathan Beaulieu behind the Montreal net, and Beaulieu gave up the puck along the boards.  Brooks Laich pinched in along the wall, and with three Canadiens surrounding him, he found Tom Wilson circling through the left wing faceoff circle.  Wilson took the pass, turned, and snapped a shot past goalie Mike Condon at the 2:26 mark.

The goal held up into the second period, but the Canadiens knotted the game mid-way through the period.  Lars Eller scored from in tight just two seconds after a Montreal power play expired.  The tie lasted into the final minute of the second period when T.J. Oshie scored an odd goal.  The play started with the Caps entering the Canadien zone on a 3-on-2 rush, Nicklas Backstrom carrying the puck down the middle.  After gaining the zone, Backstrom slid the puck off to his right to Oshie, who wristed a long-range shot off Condon’s blocker.  The puck popped up into the air, Condon losing track of it.  It fell and deflected off Condon’s right elbow into the net.  After a brief discussion of whether a Capital redirected the puck with a high stick, the goal stood, and the Caps had a 2-1 lead going into the second intermission.

Montreal tied the game early in the third period.  With the Caps on a power play, the Montreal penalty killers caught the Caps – Oshie and John Carlson, specifically – in the unfortunate position of trying to get into position as a battle for the puck was being waged along the wall.  As both Oshie and Carlson turned into their respective positions, the puck sprang free, and Paul Byron fed Brian Flynn exiting the zone.  Flynn was already several strides ahead of Oshie and Carlson, and Backstrom was still too far off along the wall, giving him and opening to head off on a breakaway.  He skated in, deked goalie Braden Holtby, and tucked the puck around Holtby’s extended left pad.

Six minutes later, Oshie struck again.  It was a simple play that few players could make.  Alex Ovechkin collected the puck along the left wing wall and sent it up to Karl Alzner at the left point.  Alzner fired the puck toward the net, and Oshie, from the inside of the left wing circle, redirected the puck out of mid-air and off the post to give the Caps a 3-2 lead that they would hold for their sixth straight win.

-- Holtby extended a pair of personal streaks in this game.  He ran his personal winning streak overall to eight games, a career best, during which he has a goals against average of 1.85 and a save percentage of .935.  He also extended his streak of games without a loss in regulation time to Montreal to nine (7-0-2, 1.40, .949, two shutouts).

-- Tom Wilson’s goal gave him goals in consecutive games for the first time in his career, not to mention they are the first two goals he has this season.

-- With an assist, Nicklas Backstrom extended his points-scoring streak to four games, a season high for him.

-- Evgeny Kuznetsov had a quiet night – one shot attempt (shot on goal), no points, in 17 minutes and change.  That makes consecutive games without a point for Kuznetsov, the first time that has happened since he opened the season without a point in his first two games.

-- John Carlson had an interesting game… seven shot attempts (no points), six giveaways and seven blocked shots.  Add in the minor penalty he took, and it was a study in frenzied activity with little to show for it.

It would be tempting to say that the Caps just keep doing what they do, but what they have been doing lately is a bit disturbing, and it was in full color in this game.  Montreal recorded 56 shot attempts at 5-on-5 to 33 for the Caps, a Corsi-for percentage of 37.1 for the Caps that is their worst for a single game this season (numbers from war-on-ice.com).  Teams don’t win on the basis of a PDO of 115.2.  Well, they do, but it is not something they can sustain.  This game was a case of goalie Braden Holtby stealing one right out of the hands of the Canadiens.  The Caps need to have more balanced effort than that if they are to extend their winning streak much further.