Washington Capitals: Half and Half - Comparing Seasons at the Half-Way Mark, Part I 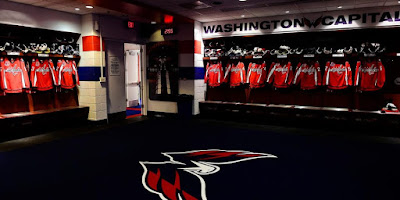 Last Tuesday, the Washington Capitals played their 41st game of the schedule and reached the half-way point of their 2017-2018 season.  They finished the first half at the top of the Metropolitan Division, a place that a lot of Caps fans might have thought would be out of reach this season after last season’s Presidents Trophy-winning campaign.  It begs the question, just how does this team compare to last year’s at the half-way mark?  We have a series of pieces to explore just that question.  In Part I, team factors.

The good news here is that the Caps are on a pace to finish with 106 points, which would be the seventh-most standings points earned in a full season in franchise history and the fourth straight season in which they would top the 100-point mark.  At the moment, the New York Rangers, Chicago Blackhawks, and Anaheim Ducks are the only other teams in a position to make it four straight 100-point seasons, and none of them are currently on a pace to do so.

The bad news is that whereas last season the Caps were able to squeeze out points in close games (two more wins, two more extra time losses earning points), those games – well, four of them – were regulation losses.  Drilling into the one-goal games in that margin, last year’s Caps were 12-3-5 in one-goal games at the 41-game mark, half of those wins settled in extra time.  The difference this season is one fewer win in one-goal games (11-2-3), but even those wins have been tighter in that eight of them were won in extra time.  At the other end of the goal-differential spectrum, this year’s Caps team is about as likely to get blown out as blow out other teams, posting a 9-8 record in games decided by three or more goals.  Compare that to last year’s squad that was 10-4 in such games at the half-way mark.

Still, this year’s club stands at the top of the Metro, which was not the case last season, when the Caps were second in the division behind the Columbus Blue Jackets.  This year’s Caps do not hold quite as high a league ranking as last year, due in large part to the Metropolitan Division teams cannibalizing one another in what is shaping up to be a very close race, top to bottom, down the stretch.

Record-wise, this year’s team is not far off last year’s pace, but it is playing closer to the margin.  It would not take much for it to tumble off their current perch at the top of the Metropolitan Division if their luck in close games changes just slightly, given how often they have settled things in extra time.

At the highest level – goals for and against – there is one surprise and one expected outcome.  Losing Justin Williams, Marcus Johansson, and Daniel Winnik (32 goals among them at the 41-game mark last season) from last year’s team might be expected to result in a drop in goal scoring.  However, the Caps are actually scoring at a slightly higher pace (3.05 goals per game) than they did at the same point last season (2.90).

It is on the other side that things are of a more expected nature.  Losing the experience and skill of Karl Alzner, Nate Schmidt, and Kevin Shattenkirk (who did not play for the Caps in the first half last season), it would be reasonable to expect that the defensemen replacing those players would, at the very least, need time become acclimated to the team and the NHL pace.  Not even a world-class goaltender such as Braden Holtby would be able to plug all the holes such a turn of events would open.  And, he hasn’t.  The Caps are allowing almost than three-fourths of a goal per game more this season (2.83) than they did last season (2.10), when they had one of the best team defenses in the league.

Things follow a similar pattern on special teams.  This year’s Caps team is actually a bit better at the half-way point on the power play (19.2 percent) than they were at this point last season (18.0 percent), although the seasons look remarkably similar in goals and opportunities, with one exception.  Those shorthanded goals against.  With five in 41 games, they are on a pace to allow ten this season.  It is not an unheard of number – it would be the six time in the last 13 full seasons (not including the abbreviated 2012-2013 season) that the Caps allowed double digits in this category.  Compare it to last season, when over the course of all 82 games the Caps allowed only three shorthanded goals, their lowest number over the same span of seasons.

It is on the penalty kill where things, perhaps expectedly, have deteriorated somewhat.  Despite facing fewer shorthanded situations this season to date (142) than last season at this point (149), the Caps have allowed 33 percent more power play goals (28 versus 21 last season) and have seen their penalty killing efficiency drop by almost six point (from 85.3 percent to 80.3 percent).

There has been an interesting development in shooting patterns.  Washington is averaging more than a shot and a half fewer shots on goal per game (28.8) this season from last (30.4).  The company line is, “we look at the quality of shots.”  and based purely on outcomes – higher shooting percentage, more goals, then at least coincidentally the “quality” line and results are consistent.  The Caps have ticked up their shooting percentage a full point from last season (from 9.6 to 10.6 percent), and as noted, their goals per game are up (from 2.90 to 3.05).  Sustainable?  That’s what the second half of the season is for.

“Grittership” is a term we use as a catch all for a number of statistical categories that generally reflecvt the harder or less glamourous aspects of play that people count – hits, blocked shots, penalties, faceoffs, turnovers for and against.  There are several numbers that jump out here, and most are not good.  The good is the faceoff number, the Caps being one percentage point better on wins (51.3 percent) than they were at this point last season (50.3 percent).  If you think attention to detail in one are makes for good performance in others, you will see this as a good thing.  If you think, “meh, faceoffs don’t matter much in the larger scheme of things,” you will go, “meh…”

Other numbers are faint indicators of other problems.  Take, for instance, penalty minutes.  The Caps have 421 penalty minutes this season, up 62 minutes (think of it as a full game’s worth or more than 17 percent higher) from last season through 41 games (359).  That it hasn’t translated into more penalty killing situations is a product of what kinds of penalties are up – majors (from 5 to 11) and other penalties, (misconducts, bench penalties, etc.; also up from 5 to 11).  Still, the added minutes affect continuity and the management of lines and line changes.

They have not made up for this with a better turnover ratio, either.  Many of these grittership numbers are credited from the eye of the beholder – what “looks” like a hit or a takeaway within their interpretation of the definition – but that aside, the takeaway-to-giveaway ration dropped from 0.76 to 0.62 this season, a 14 percentage point drop.  It is possible that the eyes on the ice are more strict about such things this season, but it is both giveaways that increase and takeaways that drop.  Those are not good visuals.

Looking at goals by strength is an interesting.  The Caps are up at even strength from last season, from 93 to 98.  Not a large increase, but a welcome one.  On the other hand, two thirds of the increase in total goals (ok, it’s just four of six) is attributable to an increase in empty-net goals, from five at this point last season to nine through 41 games this season.  They all count, though, and it is a further matter of interest that there are seven Caps with empty net goals.  That Alex Ovechkin and Jay Beagle each have a pair to lead the team is a study in how a first liner and a fourth liner can get involved in the late action.

A weird fact (or scoring interpretation) about shots is how the Caps have done so poorly in redirecting shots into the net this season over last.  Looking at deflections and tips, the Caps shot 23-for-81 through 41 games last season (28.4 percent) but just 11-for-62 (17.7 percent) so far this season (shot statistics from NHL.com).  Fewer chances, less efficient.  Perhaps this is a place where the absences of Marcus Johansson and Justin Williams are being felt.

On the other hand, the Caps have been charged with fewer missed shots this season (480 versus 522 at similar points, last season and this).  Almost all of the 42 shot difference is a product of fewer shots sailing wide (40).  They have blacksmithed the net more often, though, hitting the crossbar or post 30 times so far this season compared to 23 times at this point last season.

At the team level, the first half of this season for the Caps does not look a lot different from last season, wins and losses-wise.  However, the further you drill down into the numbers, the less impressive that looks, and in fact hints at possible trouble ahead.  They are playing their games closer to the margin than last season, have more of a mixed success in close games this season, and their possession numbers are uninspiring.

It is not the sort of club that seems able to peel off a long winning streak or sustained stretch of successful play.  As the Caps set forth on the second half of their season, remember that last year’s edition started the second half 17-4-2 in their first 23 games of the second half with winning streaks of eight and six games in that run to propel them to a 28-10-3 second half.  This year’s club had two winning streaks of four games in the first half (although they could match that on Sunday against the St. Louis Blues).  Does this club have another gear?  Will those holes be filled in and their youngsters develop enough in time to secure a postseason spot and go deep in the second season?  We will see.
Posted by The Peerless at 4:00 AM No comments: