The Peerless Prognosticator is ON THE AIR!!! -- Game 43: Sharks at Capitals, January 5th

The Washington Capitals return to home ice on Sunday afternoon to host the San Jose Sharks in a matchup of teams who got their 2020 schedules off to a good start with wins.  The Caps will be trying to use their win over Carolina on Saturday as a foothold on which to return to their winning ways, while the Sharks are hoping their overtime win over Pittsburgh signals a reversal from a disastrous December that saw them sink out of sight of a playoff spot. 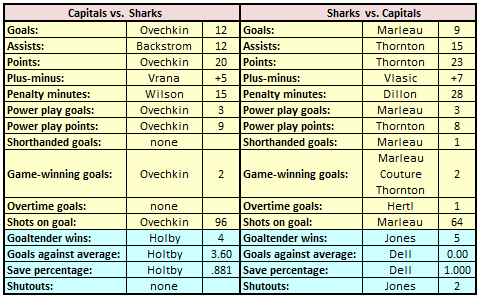 San Jose had a ghastly December, going 2-9-2, the worst record in the league for the month.  They were awful on both sides of the puck, their 27 goals tying Detroit for fewest in December, their 47 goals allowed tying Ottawa for sixth-most allowed.  On the offensive side of the puck, they just did not get much production from their old guard.  Patrick Marleau and Joe Thornton, who have combined for almost 1,000 goals (972) and more than 3,300 games played (3,303) in their respective careers, combined for two goals, one apiece, in 13 games in December.  Thornton has been more of a set-up man in his career, seventh all-time in career assists in the NHL (1,080), but that one goal he had in December is his only goal this season.

It is part of a late-career drop-off in goal scoring for the 22-year veteran, who has 37 goals over his last 241 games over the last three and a half seasons.  His assists are down as well, the 15 he has in 42 games being his lowest on a per-game basis (0.36 assists per game) since his sophomore season in the NHL, in 1998-1999, when he averaged 0.31 assists per game in 81 games for the Boston Bruins.  Is Thornton coming out of his half-season slump?  He has points in three of his last four games (1-3-4), but he had points in three of four games (0-3-3) in late November before going 0-3-3 in his next 11 games.  His production tracks with his ice time, to a point, the 14:37 in ice time per game being the lowest of his career.  The 40-year old Thornton, who contemplated retirement last summer, is on a one-year contract this season at $2.0 million, and one cannot but wonder if it is the last one he will have with the Sharks.  In 47 career games against the Capitals, he is 17-32-49, plus-9.

Marleau started the season respectably, posting six point in his first six games (2-4-6).  But then, he recorded only five points in his next 17 games (4-1-5) and followed that up with an 11-game streak without a point.  He has been more visible of late, going 1-3-4 in his last four games heading into the Sunday contest.  Marleau, who has spent most of his career with the Sharks, returned this season to the club after spending two seasons with the Toronto Maple Leafs.  The Leafs traded him to the Carolina Hurricanes last June with a conditional first round pick and a 2020 seventh round pick for a sixth-round pick.  Carolina subsequently bought Marleau out, and he signed a one-year/$700,000 deal in October to return to San Jose.  He, like Thornton a 40-year old (they are the second and third oldest players in the league), might be playing on his last contract as well.  In 34 career games against Washington, Marleau is 9-14-23, plus-4.

Through Friday, 40 goaltenders logged at least 1,000 minutes this season.  Among them, Martin Jones ranked 34th in goals against average (3.13) and 38th in save percentage (.893).  He was last in the league in even strength save percentage (.886) among all goalies appearing in at least ten games.  It has to be of considerable concern for the Sharks, who have seen Jones’ goals against average rise from 2.27 in his first year with the club (2016-2017, after arriving from the Los Angeles Kings), and his save percentage drop from .918 that same season. If he finishes this season with a save percentage under .900, it will be his second straight season under that threshold. 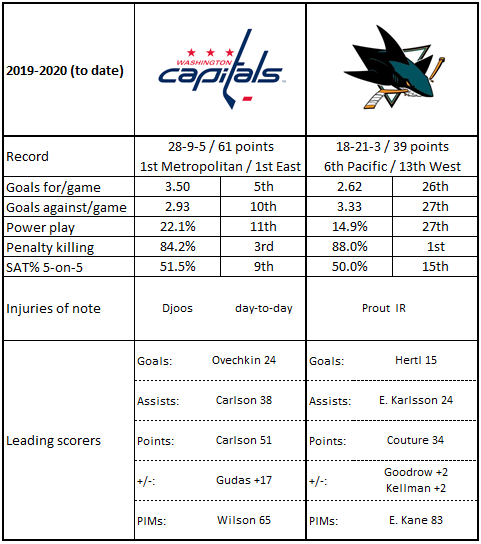 2.  How many players would you have gone through on the Sharks roster before settling on Kevin Labanc as the Shark with the only power play goal on the road for December (against Florida)?

3.  In going 0-4-1 on the road in December, the Sharks never led at either intermission in the five games.  They allowed the first goal in all five games as well.

4.  In five road games in December, San Jose scored a total of five goals, no Shark with more than one.

5.  No Shark had a multi-point game on the road in December.

1.  The Caps might be happy to get at least a couple of home games this week.  Only Los Angeles and Montreal had fewer home games in December (four apiece) than the Caps (five).

2.  The Caps were 21-for-21 killing penalties on home ice in December, the only team with a perfect penalty kill on home ice for the month.

3.  The flip side of that is that the Caps were shorthanded 4.20 times per game on home ice in December, most in the league.

4.  Odd stat… the Caps had a “net” penalty kill of over 100 percent in December, owing to the fact that they had one shorthanded goal scored, thus leaving them with a net penalty kill for the month of 104.8.

5.  In five games on home ice in December, the Caps never held a lead after one period, the only team in the league failing to do so.

Fourth liners are supposed to be “energy” guys who can aggravate, stimulate, occasionally intimidate, and chip in some offense from time to time.  Garnet Hathaway was just that in December.  He had, for a fourth liner, good offensive production (4-1-5 in 13 games), his lone goal being the game-winner in a 5-2 win over Tampa Bay on December 14th.  He had a two-point game (both goals) against the Sharks to open the month, his only multi-point game this season.  His 23.5 percent shooting (four goals on 17 shots) was best on the club.  He had 25 penalty minutes (second on the team to Tom Wilson’s 34) and 32 hits, he and Wilson the only players to post the double of at least 30 hits while logging at least 25 penalty minutes.  And Hathaway did all this while averaging just 10:33 in ice time per game (only Brendan Leipsic averaged less among Caps with at least five games: 9:20).

It would be a plus if Hathaway could bring his home production up to what he has accomplished on the road, although he is hardly alone among Capitals in that regard.  On the road, he is 4-4-8 (including his game-winning goal), plus-7, in 22 games, but on home ice so far he is 2-2-4, minus-1, in 17 games.  He has only one point in his last 12 games at Capital One Arena.  That was a game in which he displayed his feisty side as well.  He has an assist and 15 penalty minutes in a 5-2 win over Anaheim on November 18th.  You might also remember that this was the game in which he squared off with the Ducks’ Erik Gudbranson, his actions leading to a game misconduct penalty and a three-game suspension for “intent to injure/spitting.”  Not that Hathaway has been a shrinking violet against the Sharks.  In 11 career games against San Jose, he is 3-3-6, plus-1, with 24 penalty minutes.

The Sharks are a mess.  They fired head coach Peter DeBoer after starting the season 15-16-2, but they have not done any better under Bob Boughner (3-5-1).  They are a poor road team (7-10-2/25th in points percentage), their 3-2 overtime win in Pittsburgh on Thursday notwithstanding.  They will play in Columbus on Saturday afternoon before arriving in Washington for the fourth game of a five-game road trip, playing their third game in four days.

The Caps have been teetering on shaky skates themselves over the past couple of weeks, a victim of a pace that would be hard to sustain over a long season and a bug that seemed to be working its way through the team.  But given the choice between where these teams are, the condition in which they find themselves, and what direction they are headed, the Caps are the better bet.