Looking at the Washington Capitals draft performance over the 2001-2010 period by position, we have covered goaltenders and defensemen.  That brings us to the wingers, with your generic “forwards” added in.

Of the 89 players selected in the entry draft over the 2001-2010 period, 35 were wingers or generic forwards.  The Caps have been all over the map with these picks, too.  Five of them were first-round picks, and six of them were seventh-round picks, with a healthy number in-between: 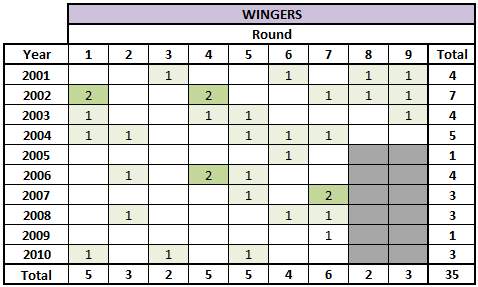 Looking at the Caps’ history in drafting wingers over this period is going to look like a rerun of their history with defensemen.  In the first round the club has done rather well.  Four of the five players selected there have recorded more than 300 regular season games and at least 100 points in the NHL – Alex Ovechkin, Alexander Semin, Boyd Gordon, and Eric Fehr.  Even the fifth – Evgeny Kuznetsov – would seem to be a sure bet to reach those marks (if he really, really does come to North America).

After that?  Well, you might want to avert your eyes.  This is where the “rerun” portion of the show starts.  If you look at rounds two through five, there are only three players – Chris Bourque, Owen Fussey, and Oskar Osala – who have so much as appeared in a single NHL game.  Bourque, a second-round pick in 2004, has 51 of the 58 total appearances and has yet to get a secure foothold on an NHL roster spot.  In parts of four NHL seasons he has not played in more than 21 games in any of them.

Of the other two second round picks, Francois Bouchard was traded by the Caps to the New York Rangers for Tomas Kundratek in November 2001, never having played a game for the Caps.  Dmitry Kugryshev left the Caps system at the end of the 2010-2011 season.  Neither Bouchard nor Kugryshev finished the 2012-2013 season in North America.  In December 2012 Bouchard signed a contract with Medveščak Zagreb, then a Croatia-based club in the Austrian Hockey League.  Kugryshev skated for CSKA Moscow in the Kontinental Hockey League.

Then there is the great void that is the third through the fifth rounds.  Twelve players were selected in those rounds, and only Owen Fussey and Oskar Osala appeared in any NHL games, seven between them.  Fussey played in four games for the Caps in the 2003-2004 season, his only action in the NHL.  He bounced around the AHL and ECHL through the 2007-2008 seasons and last dressed for the Coventry Blaze in the Elite Ice Hockey League in Great Britain in 2011-2012.  Osala played two games for the Caps in 2008-2009 and another for the Carolina Hurricanes in 2008-2009.  He lasted in the AHL through the 2010-2011 season, then he headed for the KHL where he played the past two seasons.  There is still the unsettled question of how high 2010 fifth-round pick Caleb Herbert will rise in the organization, but this part of the draft had yielded very little for the Caps over the 2001-2010 period.

The history of sixth through ninth round picks (the NHL had a nine-round draft until 2005) is almost as sparse.  Over the 2001-2010 period the Caps selected 15 players over the ten-year period.  Three of them – Tim Kennedy, Andrew Gordon, and Stefan Della Rovere – have dressed for a combined 187 games.  Only 12 of them were skated in a Caps sweater (all by Gordon).  Kennedy, while he never skated a game in the Caps’ system, did bring back a 2006 sixth-round draft pick in a trade, a pick that became Mathieu Perreault (who we will see in another look at the Caps’ draft history).

No other players drafted in the sixth through ninth rounds skated for the Caps or brought much back in trade value (unless you count Stefan Della Rovere for D.J. King a value trade). It is unlikely that any of the players taken in those round who have not already appeared in an NHL game will ever appear in one.

In the end, the Caps’ draft performance over the 2001-2010 period for wingers looks a lot like their performance with defensemen.  They do well at the top of the draft, markedly less so after the first round.  In this instance the Caps did well in the top-20 picks level.  Alex Ovechkin (first overall in 2004), Alexander Semin (13th overall in 2002), Boyd Gordon (17th overall in 2002), and Eric Fehr (18th overall in 2003) have had at least contributing careers (Fehr) to elite-level careers (Ovechkin).  But note that the last of those picks was Ovechkin in 2004.  The Caps have not drafted a contributing winger since the 2004-2005 lockout.  That’s a long time to go without new blood at the position from within based on your own amateur evaluations.

The Caps are counting on significant contributions from Evgeny Kuznetsov, who has yet to play a game in North America since he was drafted in 2010.  He might be a first-line left winger (and if he does not play center, it will be as a left wing so long as Adam Oates is coach – Kuznetsov is a left-handed shot).  Then again, who knows?  Even if one assumes that Kuznetsov will contribute at that level, the Caps have struggled to fill other lines from the draft.  When the 2013-2014 season opens, the Caps will find that they have only Alex Ovechkin as a winger on any of the top three lines that they drafted at that position, unless Eric Fehr skates as a top-nine winger (Marcus Johansson, who could start on the left side of the top line, was drafted as a center).  Sure, Alexander Semin and Boyd Gordon played more than 800 games for the Caps, but when each left in free agency, the Caps could not fill their positions from within with drafted players.

If you take away Ovechkin – a product of the draft lottery – the Caps’ draft performance for wingers over the 2001-2010 period looks very uninspired, specifically with respect to the post-2004-2005 lockout period.  Perhaps Tom Wilson (16th overall in 2012), Andre Burakovsky (23rd overall in 2013), or Zach Sanford (61st overall in 2013) will reverse the trend.  Maybe a Chandler Stephenson (77th in 2012) or Travis Boyd (177th in 2011) will surprise.  But if you look to the future with hope, looking back on the past is somewhat disappointing.