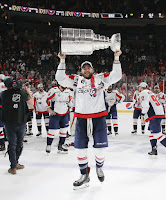 “The one who cannot restrain their anger will wish undone, what their temper and irritation prompted them to do.”
-- Horace

Tom Wilson has a well-honed ability to get under the skin of opponents.  His talent for goading opponents into taking penalties is considerable.  Among players appearing in at least 40 games this season, Wilson was third in penalties drawn per 60 minutes (source: naturalstattrick.com).

But 2017-2018 was the season when Wilson became less an agitator, not as much a pugilist, and more a fully-formed hockey player.  Yes, he did compile a career high of 187 penalty minutes, and his 13 fights was one off his career high in 2013-2014.  However, there were those 14 goals, a career high that equaled his total from his previous two years combined.  He had a career high 21 assists and a career best 35 points.  His 15:59 in average ice time was more than three minutes per game clear of his previous high (12:56 last season).

In 2017-2018 Wilson became both a top-line forward who was not a liability at the position and became an important penalty killer, averaging more than two minutes of shorthanded ice time for the first time in his five-year career.  And, he became a more consistent contributor.  Wilson fought off a slow start – missing the first four games of the season with a suspension for boarding the St. Louis Blues’ Sam Blais in a preseason game (his second suspension of the preseason) and then recording only a single point in his first eight games of competition in the regular season.  He averaged almost half a point per game for the rest of the season (0.49 points per game in 70 games), and he had at least four points in five of his last seven ten-game segments, at least one goal in six of them. 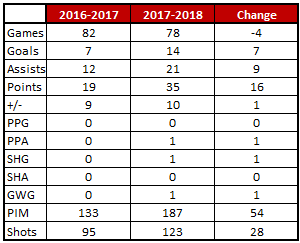 Fearless’ Take… Tom Wilson was, if not a reluctant shooter in his four previous seasons, not a prolific one.  Despite appearing in all 82 games three times in those first four seasons, he never hit the 100 shot mark.  He did in 2017-2018, recording 123 shots on goal in 78 games.  His shot production was no threat to Alex Ovechkin (4.33 shots per game), but his 1.59 shots per game did matter.  The Caps lost only one game in regulation in the 19 games in which Wilson recorded three or more shots on goal (17-1-1).

Cheerless’ Take… Wilson taking penalties did seem to influence the Caps’ fortunes in a negative way, at least slightly.  In game when he took at least one penalty, the Caps were 23-14-3.  And the type of penalty seemed to matter.  In 13 games in which he was charged with a fighting major, the Caps were 9-3-1. They were just 14-11-2 when sat for reasons other than a fighting major.  However, when he avoided a visit to the penalty box altogether, the Caps were 24-11-3.

When the Chicago Blackhawks came to town in early December, the Caps were on a roll offensively. Starting with a 5-2 win over the Ottawa Senators on November 22nd, Washington averaged 3.67 goals per game over a six game stretch and scored four or more four times.  Unfortunately, Tom Wilson was not doing much of the contributing, posting only a pair of assists over that span.  In fact, Wilson dragged a 14-game streak without a goal into the contest against the Blackhawks.

However, there was a hint that Wilson might break loose against this opponent.  In his first six career games against Chicago, Wilson did not record a point.  But in his seventh game against the Blackhawks, and most recent one before this game, Wilson had a goal and two assists in a 6-0 win on January 13, 2017.

Wilson got on the board to break his personal goalless streak in the first period in this game.  After Nicklas Backstrom put the Caps in front to open the scoring mid-way through the period (a goal on which Wilson assisted), Wilson scored just under three minutes later when he took a pass from Christian Djoos at the far edge of the left wing circle and wrapped a shot around defenseman Gustav Forsling from long range and surprised Goalie Anton Forsberg 14:53 into the period.  Just 59 seconds later, Wilson had his third point of the period when he got behind the Chicago defense on a breakaway.  His shot was foiled by Forsberg, but Alex Ovechkin followed it up and beat Forsberg to make it 3-0, 15:22 into the period.

Wilson appeared once more on the score sheet, this time late in the third period.  With the Caps ahead, 5-2, but the Blackhawks on a power play and their goalie pulled, Wilson was gifted the puck from a clot of players between the hash marks.  In one motion he swept the puck down the ice and into the empty cage for a shorthanded empty netter, his second goal of the game and fourth point.  Wilson’s first four-point game as a Capital was one of eight four-point games the Caps would record in 2017-2018.

When the Capitals visited the Flyers in their home opener of the 2017-2018 season, history was not on their side.  Washington had never defeated the Flyers in their home opener, losing four times and tying once.  Tom Wilson had his own issues against the Flyers.  In 17 career games against Philadelphia coming into this season, Wilson had one goal and three assists.  On top of that, he had 60 penalty minutes against the Flyers, more than he recorded against any other team in the league.  And, he averaged about ten minutes a game against Philly, a career average lower than any team he faced save for Toronto and Montreal.

Neither the Caps nor Wilson were going to write a new chapter in their history against the Flyers in this game.  The Caps gave up a shorthanded goal late in the first period to give the Flyers a 2-1 lead and allow them to grab momentum that they would not relinquish.  The Flyers scored three more times in the second period and three times again in the third in pasting the Caps, 8-2.  The frustration for the Caps bubbled over in the third when Wilson and Flyer defenseman Radko Gudas were nailed with matching 10-minute misconduct penalties, ending Wilson’s night with no points and just 10:29 in ice time, his low for the season.  Wilson’s frustrating record against the Flyers extended through the season.  In four games against Philadelphia he had no points and was minus-4.

Postseason… In 41 postseason games coming into this season’s playoffs, Tom Wilson was not a particularly noticeable player.  He had three goals (all of them in the 2017 playoffs) and five points, going minus-8 in the process.  His 72 penalty minutes in those games helped hold him to an average of less than 11 minutes of ice time across those games.

The 2018 postseason was a different story.  The Stanley Cup run for the Caps afforded fans a long look at “The Compleat Wilson.”  He appeared in only 21 of the 24 games played by the Caps, missing the last three games of the conference semifinal against Pittsburgh when he was suspended for his unpenalized hit on Zach Aston-Reese.  The hit fractured Aston-Reese’s jaw and left him with a concussion.  Wilson avoided a suspension from a hit he applied to Brian Dumoulin in the previous game.

Over his first four seasons, Tom Wilson established himself as the player that fans and players of 30 other teams hated.  He could draw penalties with the best of them, get under opponents’ skin, and get into the heads of opponent fan bases.  It had its merits, to a point, deflecting attention from the more productive (in a goals and points way) assets the Caps had on the ice.

As the 2017-2018 season wore on, Wilson established something else.  He became a legitimate top six power forward who could not just protect linemates, but contribute offensively.  And, his scope of responsibility broadened to include a larger penalty killing role.  He hasn’t so much replaced his ability to instigate and annoy as much as he has supplemented it, thereby only adding to the possibilities and opportunities for opponents to lose their temper and unleash their anger, only to wish it undone when Wilson and the Caps skate off with a win.