The Peerless Prognosticator is ON THE AIR!!! -- Game 36: Capitals at Hurricanes, April 2nd

The Washington Capitals finish up their last long road trip of the season tonight in Raleigh, North Carolina, taking on the Carolina Hurricanes in the latest “most important game of the season” for the Caps.  Washington heads to Carolina having earned three of a possible four points through two games of this three-game road trip and get the Hurricanes coming off a 4-1 loss to the Montreal Canadiens on Monday night.

The loss to Montreal is just the most recent misstep taken by Carolina these days.  When Carolina beat Washington in a 4-0 shutout on March 12th, the Hurricanes led the Southeast Division with a 15-9-1 record.  Since then, however, the Hurricanes have a record of 1-7-1 and have fallen to tenth place in the Eastern Conference.

In that woeful nine-game stretch the Hurricanes have been outscored, 31-14.  Oddly enough, five of their eight losses have come by identical 4-1 scores, including last night’s loss in Montreal.  And is not as if any part of the Hurricane game has held its own.  Its power play went 3-for-32 (9.4 percent), a worse mark overall than even their overall league-worst season mark of 10.0 percent.  Its penalty kill went 19-for-27 (70.4 percent), also worse than their overall season mark of 78.6 percent.

The big problem for the Hurricanes in their 1-7-1 run is their seemingly endless capacity to fall apart as games go on.  Only three times in the nine games have they trailed at the first intermission, and only four times have they trailed after 40 minutes.  But those third periods… In their last nine games Carolina has been outscored, 15-5, and twice they allowed four goals – once in a 4-1 loss to Florida, of all teams, on March 19th, and again on March 28th in a 6-3 loss to Toronto when they allowed four unanswered goals after taking a 3-2 third period lead.

One thing that comes jumping off the page looking at the Hurricanes’ individual statistics over these last nine games is the absence of secondary scoring.  Eric Staal (4-3-7) and Alexander Semin (4-3-7) have had decent scoring stretches, but after that Carolina has only seven goals in nine games from the rest of their skaters, and Jordan Staal has three of those.

Carolina started this rough stretch with Dan Ellis in goal in place of injured Cam Ward, but that lasted until he suffered a cut to his left knee in the last minute of a 4-1 loss to New Jersey on March 21st.  His contribution over the Hurricanes’ last nine games is an 0-3-1 record with a 2.73 goals against average and a .913 save percentage.  He was reactivated from injured reserve yesterday.  The heavy netminding burden has fallen to Justin Peters in Ellis’ absence.  During this 1-7-1 run Peters is 1-4-0, 3.21, .899.

Here is how the two teams compare in their overall numbers… 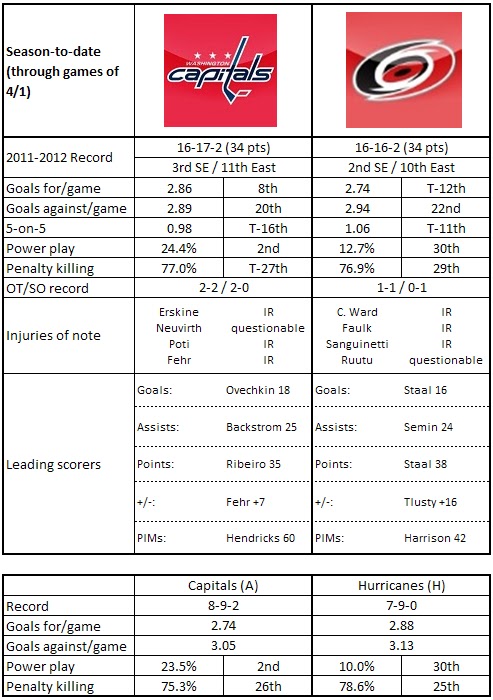 2.  Only Florida has lost more games by three or more goals than the Hurricanes.  Carolina has lost 11 such games this season, including their last five losses.

3.  Conversely, no team has played in fewer one-goal games than Carolina, and it is not close.  The Hurricanes have played in only eight one-goal decisions this season (Pittsburgh is second with 12).  They are tied with Florida and Tampa Bay for the fewest one-goal wins (four).  Must be a Southeast thing.

4.  Carolina has the worst intra-divisional record in the Southeast (4-9-0).  In fact, no team in the league has fewer standing points earned within their division than Carolina.  They are tied with the Colorado Avalanche with eight points earned.

1.  Washington has earned points in each of their last five road games (4-0-1).  They have the eighth-best road record in the East and through 19 road games are already half-way to the total number of  road wins they had over 41 games this season (eight this year versus 16 last season).

3.  On the same theme, only three teams have a worse record when scoring first than the Caps.  The Caps have a healthy 20 first scores in 35 games, but their record in such games is only 11-8-1.

5.  Only the Buffalo Sabres have spent more time killing penalties on the road (141:09) than Washington (125:19).  That might not be an all bad thing, given that the Caps have only the 12th highest number of shorthanded situations faced.  What that tells us, though (given the Caps 27th ranked penalty kill) is that they give up a lot of power play goals late in power plays.

Jeff Skinner exploded onto the NHL landscape two seasons ago when he scored 31 goals as an 18-year old rookie.  He dropped to 20 goals in 64 games last season, and this season he has ten in 29 games.  More to the point as it concerns recent Hurricane performance, Skinner has only one goal in his last ten games and only two in his last 15 contests.  Carolina has to get more out of Skinner if they are going to halt their recent slide.  He is 1-7-8, plus-2, in 14 career games against the Caps.

Alex Ovechkin leads the NHL in power play goals with a dozen.  No other player is in double digits in man-advantage goals.  Now, imagine if he was doing something similar at even strength.  He is tied for 97th in even strength goals with the likes of Mark Letestu, Jamie McGinn, and Brian Bickell.  He is not even the leader on his own team in even strength goals (Troy Brouwer is, with seven).  If Ovechkin can drag his even-strength goal production up toward that he has displayed on the power play, the Caps’ chances to make up those last few standings points to make the post season will be enhanced significantly.  Ovechkin is 22-40-62, plus-5, in 50 career games against Carolina.

1.  Play 60.  The Caps were on both sides of late scores in regulation time in their last two games, scoring with 39.2 seconds left to tie Buffalo before winning in the freestyle competition, then losing a lead with ten seconds left in what would be an overtime loss to Philadelphia.  Another lesson given in the virtues of playing all 60 minutes.

2.  Increase net profits.  The Caps did not get the best production out of goalie Braden Holtby last week, and that is something that has to be stopped right quick if the Caps are going to keep a playoff spot in sight.  This could be a good team against which he can get back on track.  Holtby is 2-1-0, 1.34, .963, with one shutout in three career appearances against Carolina.

3.  Be patient.  Carolina has self-destructed in the third periods of games in their recent run of bad luck.  There really has not been any reason to think that a sudden improvement will be forthcoming.  But the Caps need to press the opportunities when they appear.

The Caps can make this a very successful road trip with a win.  Anytime a team goes 2-0-1 on a road trip, it is a good thing.  But if they lose and go 1-1-1?  It is just more marching in place to nowhere in particular.  The Caps cannot drop any further in the standings if they lose this game in regulation; they would remain in 11th place in the East.  But they could fall five points behind the Islanders for eighth place if the Islanders win and the Caps lose in regulation.

Ah, but winning.  If the Caps win in regulation, they jump ahead of the Hurricanes into tenth at worst and, if the Islanders lose to the Winnipeg Jets tonight, could be only one point behind the New York Rangers for eighth place.  Even if the Islanders win in regulation, a Caps win would get them to within two points of Winnipeg for the Southeast Division lead with two games in hand and one more game against the Jets, at home on April 23rd.  So…win.