The Peerless Prognosticator is ON THE AIR!!! -- Game 73: Stars at Capitals, March 20th

The Washington Capitals will try to shake off one of their less-inspired efforts of the season, a 6-3 loss in Philadelphia to the Flyers on Sunday, when they return to Capital One Arena on Tuesday to face the Dallas Stars. The Caps saw a four-game winning streak stopped in South Philly, but they carry a five-game home winning streak into this contest against Dallas.

The Stars, long a nemesis of the Caps, have fallen on hard times recently. Their loss in Winnipeg to the Jets on Sunday was their fifth straight loss (0-3-2), and they have not won consecutive games since they put together a five-game winning streak in early February. Since that streak, the Stars are 5-8-4 and are a tie-break out of a playoff spot in the West (tied with Los Angeles in points with 84, but the Kings have a game in hand as of Monday morning).

Crippling the Stars over their 17-game slide has been an inability to score goals. Their 34 goals and 2.00 goals-per-game scoring offense ranks last in the league over that span. Tyler Seguin has more than a quarter of the goal output over those 17 games (nine), and his 18 points overall mean that his name has been included in the scoring of more than half the Stars’ goals in this run. For Seguin, it is more of the same in what has been a personally-fulfilling season, but one in which his success seems not to have rubbed off on his teammates. He has already posted a career high 38 goals, but his 31 assists are, for the moment, his lowest for a full season since his rookie year in 2010-2011, when he had 11 assists in 74 games (he had 16 assists in the abbreviated 48-game 2012-2013 season). On a team that has John Kingberg (52 assists, tops among NHL defensemen), Jamie Benn (40), and Alexander Radulov (38), Seguin’s set-up production might not be critical, but given the Stars’ offensive woes of late, and contributions would be helpful to their cause. Seguin is 8-5-13, plus-3, in 20 career games against Washington.

Who is Remi Elie? Good question. If his name had come up as a “Daily Double” answer on “Jeopardy!,” the correct question would be, “which Dallas Star playing in the last 17 games is the only one that is a ‘plus’ on the plus-minus ledger?” Elie is a former second-round draft pick, taken 40th overall by the Stars in the 2013 entry draft. After spending two more seasons in the Ontario Hockey League in Canadian junior, he graduated to the Texas Stars of the AHL, where he went 15-30-45, minus-8, in 117 games over two seasons. His second year in the AHL was split with time served with the parent club, Elie getting 18 games of experience last season (1-6-7, plus-5). Elie has appeared in more games this season than any other Stars rookie (65), and despite averaging just over ten minutes per game, he does have 14 points, almost as many as the other four rookies to dress for the Stars this season combined (Gemel Smith, Dillon Heatherington, Julius Honka, and Jason Dickinson have combined for 16 points). Elie is without a point and is minus-1 in two career games against the Caps.

It seems like only yesterday that goalie Kari Lehtonen was going his best trying to plug the dike against the Caps on behalf of his Atlanta Thrashers. But Lehtonen is now in his ninth season with the Stars, and he has climbed into second place in the all-time list of games played by Dallas goaltenders, his 437 games played with Dallas trailing only Marty Turco (509). His 213 career wins for the Stars is second only to Turco’s 262 wins, and his .912 save percentage is best of any of the dozen Minnesota North Star/Dallas Star goaltenders having appeared in at least 100 games for the franchise. Lehtonen has taken a back seat to Ben Bishop this season, appearing in only 29 games so far to Bishop’s 53. Their statistics are comparable, Lehtonen with a 2.46 GAA and .913 save percentage, while Bishop is 2.49/.916. After stumbling out of the gate this season with a pair of losses and giving up six goals on 32 shots in those two games, Lehtonen went 11-3-1, 1.94, .931, with one shutout over 19 appearances. But since he pitched an 18-save shutout of the Los Angeles Kings on February 22nd, Lehtonen is 1-5-2, 3.28, .889 in eight appearances. He should get the nod in goal for this game owing to Bishop being sidelined for two weeks or more with a lower body injury, but he might have gotten it anyway, given his superior record against the Caps – 18-6-3, 2.61, .921, with two shutouts – compared to that of Bishop against Washington (2-6-2, 3.46, .888). 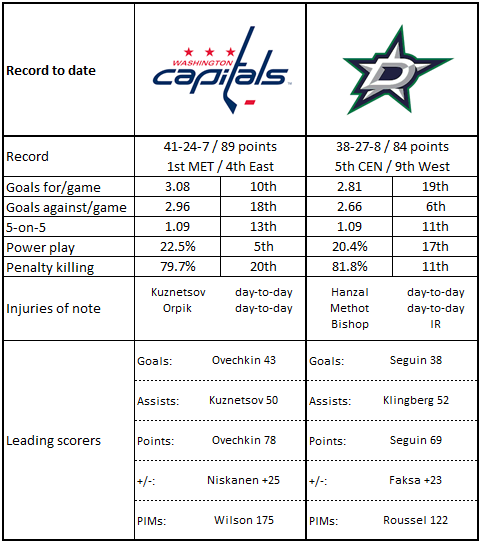 1.  Dallas’ inability to score has not hampered their defense much. The 489 shots on goal allowed over their 5-8-4 slide is the third-fewest total of shots on goal over that span. However, that number should be considered in concert with the fact that Dallas has been credited with the seventh-highest number of blocked shots (278) and the fifth-highest number of hits (455), generally measures reflecting the other team having the puck.

2.  One thing Dallas would like to correct is their tendency to wear a path to the penalty box. Ove those 17 games, no team has been shorthanded more than the Stars (62 times, tied with Boston, also over 17 games). Eight Stars have at least ten minutes in penalties in that span, led by Antoine Roussel (29).

4.  What Dallas has not had is offensive contributions from the defense lately. Stephen Johns has the only goal scored by a Stars defenseman in the last 17 games, and John Klingberg is the only defenseman with more than three points (0-7-7). That Johns goal is the only one on 142 shots on goal by seven Dallas defensemen over those 17 games.

5.  If Dallas scores on a power play, it will be either Tyler Seguin or Jamie Benn. Seguin (four) and Benn (three) have seven of the Stars’ 10 power play goals over the 17 games.

1.  Evgeny Kuznetsov will be missed for as long as he is out, but he might be missed more at home. He leads the Caps in points on home ice (42 in 36 games), is tied for the team lead in assists (28, with John Carlson), and his 14 goals at Capital One Arena rank second (Alex Ovechkin: 22). His four game-winning goals at COA lead the club.

2.  Whatever defensive problems that the Caps have had this season, they appear not to have been a product of home ice advantage. Only four teams have allowed fewer goals on home ice this season than the Caps (87): Columbus (86), Colorado (86), Nashville (86), and Minnesota (80).

4.  Washington has one shorthanded goal on home ice this season. Only Colorado has failed to record one.

5.  Jay Beagle is third in the league in faceoff winning percentage among the 103 skaters taking at least 300 draws (61.7). Only three of those faceoffs were on power plays (1-for-3/33.3 percent). Only two players among those 103 skaters have taken fewer power play draws: Kyle Brodziak (0-for-1) and Nate Thompson (2-for-2).

In June 2001, Tom Brady had yet to win a Super Bowl. Bryce Harper was eight years old, and no doubt had great hair. Michael Jordan had yet to play his first game for the Washington Wizards. Tiger Woods had not yet been introduced to Elin Nordegren. And Jason Spezza was taken second overall by the Ottawa Senators in the NHL entry draft. Almost 17 years later, it is possible that the end is in sight for Spezza. He has one year remaining on his current contract with the Stars, which should allow him to reach a number of personal milestones that he will not hit this season. He is within 17 games of 1,000 for his career. He needs 13 points to reach 900. He could get the seven assists he needs to jump into the top 100 in career assists in the NHL (he has 564; Steve Larmer had 571).

In ten NHL seasons before this one, defenseman Matt Niskanen had not gone a full season without recording at least one power play point. He does not have one this season. Part of the issue is his power play ice time. In his first three seasons with the club he averaged more than a minute of power play ice time per game with a high of 2:24 per game in 2015-2016. This season, however, his power play time has been pared back to 33 seconds per game. He has more hits credited on the power play in 32:33 of total man advantage ice time (three) than he has shots on goal (two). The durability of John Carlson manning the center point on the top unit (3:42 in power play ice time per game through all 72 games) and the emergence of Dmitry Orlov in getting man advantage minutes (1:08 per game in 72 games) has relegated Niskanen to an under-understudy role. More so lately; Niskanen has a total of 3:28 in power play ice time over his last ten games, and 2:39 of that came in last Friday’s win over the New York Islanders, a game in which the Caps had eight power plays. The flip side of that, though, is that his even strength scoring is as good as or better than last year’s pace. Last season he was 4-25-29 at evens in 78 games, while through just 58 games this season he is 5-20-25. His production this season has a certain home lopsidedness to it, going 5-13-18, plus-20 at home and 0-8-8, plus-5 on the road. A former first round draft pick of the Stars (28th overall in 2005), Niskanen is 0-5-5, minus-1, in 11 career games against his old club.

The game against Dallas kicks off a six-game stretch for the Caps in which they will face five teams (they get the New York Rangers twice), all of which are out of the playoff mix as of Monday morning. Only Dallas among those teams is closer than nine points to a playoff berth (they are tied with the Los Angeles Kings for the second wild card in the West, but the Kings own the tie-breaker at the moment). It is a time that the Caps need to take advantage of despite injuries to Evgeny Kuznetsov and Brooks Orpik.

Making hay while the sun shines on this part of the schedule will likely determine the Capitals first round playoff seeding, since their last four games – at Pittsburgh and St. Louis before wrapping up the regular season hosting Nashville and New Jersey – turn a bit darker. Getting off to a good start against a team that normally gives them fits, even at home (1-5-1 in Washington since the 2004-2005 dark season, the last five games all losses in regulation), would be welcome indeed.