The Peerless Prognosticator is ON THE AIR!!! -- Game 76: Capitals at Flyers, March 30th

The Washington Capitals, fresh off their Presidents Trophy-clinching 4-1 win over the Columbus Blue Jackets, take their show on the road on Wednesday night when they face the Philadelphia Flyers at Core States First Union Wachovia Wells Fargo [insert name of mega corporate financial institution here] Center in what could be a preview of a first round series of the 2016 Stanley Cup playoffs.

In those last seven games, the Flyers outscored their opponents by a 18-15 margin.  Special teams goals have not been much of a feature in Flyers games lately, the power play going 3-for-23 over those last seven games (13.0 percent), while the penalty killers have been a superb 16-of-17 (94.1 percent).

The Flyers have had goal scoring from both expected and unexpected sources over their last seven games.  Claude Giroux has four goals, two of them game-winners, one of them in overtime, that coming in the Flyers’ 3-2 win over the Winnipeg Jets on Monday night.  The four goals is something of an awakening for Giroux, who was on a pace to finish with just 22 goals, tying last year’s total and continuing a mid-career slide from a personal best of 28 goals in 2013-2014 (tying the total he had in 2011-2012).  If this late surge is a return to that form, he will be a formidable force in the postseason.  In 28 career games against the Caps, Giroux is 15-15-30, plus-1.

Ryan White is a player of modest accomplishments in his seven-year career, coming into this season with just 11 goals in 175 games as a generally a bottom-six forward.  However, his three goals over the last seven games, tied for second most on the club in that span, brought his season total to 11 goals, doubling his career total coming into this season.  What he has had this season that he did not have in seasons past is power play success.  White has three power play goals this season, the first of his career, two of them coming in this recent seven-game run.  In 13 games against the Caps, White is 1-1-2, minus-5.

Then there is Radko Gudas, who also has three goals in this seven-game stretch.  In his first season with the Flyers after spending three with the Tampa Bay Lightning, Gudas has set a personal best in goals scored (5), propelled by this recent run of success.  It is not a part of his game that gets expressed that often.  He is more of a nuisance, an annoyance, a pain-in-the-backside.  That is what 332 penalty minutes in 195 career games will do.  And it is not as if those penalties have come from a disproportionate number of fights.  He does have ten bouts in those 195 career games, but only two of them have come with the Flyers this season, ranking him fifth on the team.  He does lead the team in minor penalties taken (28), and he is a minus-17 in penalties drawn to penalties taken at 5-on-5.  Gudas has an assist in ten career games against the Caps. 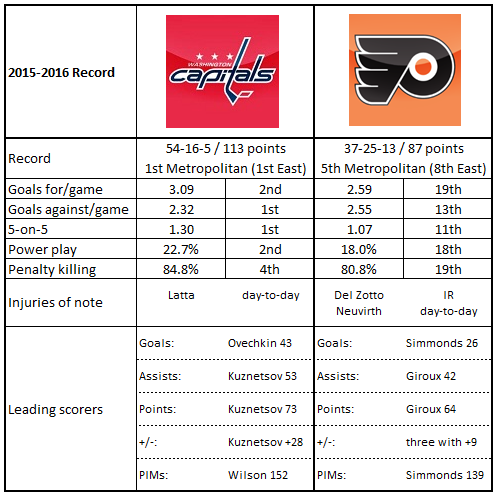 1.  Shayne Gostisbehere continues his march toward what he and Flyer fans hope will be a Calder Trophy as the league’s top rookie.  If there are highlight reel assists, he had one on the Claude Giroux overtime goal against Winnipeg on Monday night, Giroux led Gostisbehere on a two-on-one break, but his pass was muffled by Mark Schiefele.  Gostisbehere used every bit of the length of his stick to yank the puck away from Schiefele, then from one knee fed Giroux cutting to the net for the game-winner.  He leads all rookie defensemen in goals (16, twice as many as St. Louis’ Colton Parayko), assists (26, three more than Parayko), points (42), power play goals (7), power play assists (14), power play points (21, three times as many as Vancouver’s Ben Hutton), and he is fourth in ice time (19:53).

2.  The Flyers can get in trouble with penalties, but they are selective in one sense.  They are tied for the tenth-highest number of shorthanded situations faced this season, but at home they are tied for 15th with the Boston Bruins.  Despite their stinginess in allowing power play chances, they rank just 21st in home penalty killing (80.5 percent).

4.  Add to their middling rankings in the top-end statistics their 47 first period goals (fifth-lowest in the league) and their 69 third period goals scored (19th), and it is not a team that should scare people.  Except for this…they have ten overtime goals this season, second-most in the league.  Fifteen of their 75 games have been settled in the five-minute extra session.  Unfortunately for the Flyers, there isn’t a lot of 3-on-3 in the postseason.

5.  Philadelphia does not impress much in their possession numbers, either.  At 50.2 percent Corsi-for for the season overall at 5-on-5, they rank 16th of 30 teams.  Their score-adjusted numbers are slightly worse – 49.9 percent, ranking 17th overall. And it you take it down another notch – to score-adjusted Corsi at 5-on-5 on home ice – well, the Flyers take it down another notch, ranking 18th at 49.0 percent (numbers from war-on-ice.com).

3.  The plus-18 shot differential the Caps enjoyed against Columbus on Monday night (40 for, 22 against) was the second-highest of the season for the club.  They were plus-19 (38 for, 19 against) in their 5-2 loss to the Florida Panthers on February 2nd.

4.  We are getting to the end of the season, when the Gimmick will be put away for another year, but while it is still a feature, keep in mind that the Caps are the most efficient club in the league one respect of that aspect of the game.  Washington is 8-for-15 shooting on trick shots, a 53.3 percent mark.

5.  The Caps are eighth in the league in score-adjusted Corsi-for at 5-on-5 in road games (51.7 percent), a number that is actually better than their corresponding number on home ice (51.2 percent, 14th in the league; numbers from war-on-ice.com).

If there is one thing that you can point to as a reason the Flyers are in the thick of the playoff race, it is goaltending, specifically that of Steve Mason.  He has been very effective in March, going 7-2-2, 1.97, .929, with one shutout.  And his is the basket into which the Flyers must carry their hopes of reaching the playoffs, since Michal Neuvirth is out for the rest of the regular season with what, in the NHL’s mysterious “don’t tell” sort of way, is thought to be a knee injury.  He has been an especially effective goaltender on home ice.  In his last 15 appearances at Wells Fargo Center, he is 10-3-2, 1.85, .937, with three shutouts.  In 15 career appearances against the Caps, Mason is 7-5-2, 2.85, .904, with two shutouts.

When Brooks Orpik returned from a lower body injury in February, he displayed an offensive touch he had not revealed in his year and a half with the Caps, going 2-4-6 in his first six games back, including the first regular season game-winning goal in his career.  He does not have a point since that hot restart, though, going oh-for his last 15 games.  He does contribute in other ways.  He is expected to make his presence felt in the defensive end of the ice, and if that means doing some of the hard work, like hits and blocked shots, he will oblige.  He has at least three hits or three blocked shots in each of his last seven games with a high of eight hits in the Caps’ 3-2 win over the Minnesota Wild on February 26th and a high of eight blocked shots in the Caps’ 4-1 win over the Nashville Predators on March 18th.  In 61 career games against the Flyers, Orpik is 2-10-12, plus-8.

The Caps now know what they will be doing in mid-April, playing playoff games with a home-ice advantage as long as they are able.  The Flyers have no such certainty, holding the second wild-card spot by the thinnest of margins, a tie-breaker over the Detroit Red Wings (fewer games played with the teams tied in standings points).  Philly has to keep winning to keep that advantage since Detroit holds the advantage of more regulation and overtime wins.  That’s the long way of saying that the Flyers are a desperate team, while the Caps are one that is likely to be in “tune-up” mode to get ready for the postseason.  There is an importance in playing with focus and discipline for Washington, but they will not have the sense of desperation with which the Flyers are likely to play.  That, and the snake pit in which the Caps will find themselves, makes for a difficult test for the Caps, but it is a good one to have to simulate the playoff atmosphere they will be facing in less than three weeks.

Posted by The Peerless at 9:02 PM No comments: