From the Bowels of Broad Street: A Caps Fan in Philly 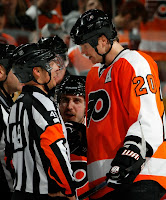 The business-like voice of the GPS announced the Broad Street exit in south Philadelphia, although you need not have listened. The line of cars would have been enough of a hint of a hockey game to be played at Wells Fargo Center on Friday. We were visiting family in the City of Brotherly Love for the holiday, and rather than brave the mobs of shoppers at the local mall on “Black Friday,” we decided to make an “Orange Friday” of it, taking in the Calgary Flames and the Philadelphia Flyers for a matinee contest.

I could say that this is what I have been reduced to, having to fill my hockey need even when on vacation and doing so by watching the – ugh – Flyers. But it wasn’t my idea. My sister and her husband thought it would be a fun time for my father, who happens to be a hockey fan (a Wilkes-Barre/Scranton Penguins fan, a fact for which I bear no small amount of blame).

So there we were, the five of us (my nephew rounding out the party) sitting in Section 121 of Wells Fargo Center, me looking on with a perverse sense of anticipation, waiting for what indignity the Flyer fans in attendance might rain down upon the sprinkling of Calgary fans in attendance, on the Flames skating on the ice, or on the officials trying to keep the peace between the teams.

We were not disappointed, at least not in the end.

But it did not start that way. About 15 rows below us there were what looked to be a dozen or so Calgary fans wearing Flames jerseys. I didn’t detect a beer stain or streaks of nacho cheese on any of them. What is with Philadelphia fans?! Have they mellowed since the days of booing Santa Claus across the street at the old Veterans Stadium? These folks were… civil.

Then there was the hockey. The first period was as dull a 20 minutes of hockey as I’ve seen this year, and that was much to the liking of the Flames, no doubt. No goals were scored, and there were few chances had by either team. Philly did have some decent looks on a power play, but Miikka Kiprusoff had good looks at them, too. But what we noticed was a distinct lack of… noise. Perhaps it was a product of the day – folks still digesting their Thanksgiving dinner – but it was not the lively crowd we were expecting.

Things got a little more energetic in the second period when Nikolai Zherdev showed why he is one of the most frustrating players in the league. Zherdev collected a loose puck behind the Calgary net and circled all the way around the boards with it, completing the circuit by cutting to the middle above and between the circles. At that point he encounted Niklas Hagman trying to force Zherdev to give up the puck. Rather than pass off or skate into Hagman’s path, Zherdev opened the blade of his stick as if to send the puck to Braydon Coburn along the right wing boards. The move froze Hagman, upon which he curled his stick blade around the puck, took another step, then wristed the puck past Kiprusoff for one of the prettier goals you’ll ever see.  He just doesn't do it often enough, and intersperses his artistry with too frequent nights and shifts taken off.

The Flyers gave the goal back, though, in one of those moments a Caps fan lives for. The puck was sent around the Calgary net with the Flyers on a power play, coming to Mike Richards along the right wing wall at the top of the circle. What Richards didn’t appear to recognize as the puck was coming around, though, was Curtis Glencross stepping out to challenge him. Richards had his head down as he collected the puck, and he tried to sweep it to Chris Pronger at the blue line. Way bad move. Glencross had a step or two on Richards, but Pronger was in a position to stop him (even if it meant an interference call, since Glencross had not yet collected the puck). Pronger chose to matador the play (ole!), leaving Richards to sprint back as best he could. Glencross had too much of a head start for Richards to make up, and it was enough room for him to skate in on goalie Sergei Bobrovsky, pull the puck to his backhand, and lift it over Bobrovsky’s pad to tie the game.

Late in the second Calgary was guilty of a bonehead play of their own, courtesy of defenseman Robyn Regehr. Braydon Coburn sent the puck up ice with Richards skipping it the rest of the way deep behind the Flames’ net. Regehr got to the puck first, but then looked to have no clue what he should do next. The moment’s worth of indecision was enough for Andreas Nodl to pick Regehr’s pocket. Richards flicked the loose puck to the middle where James van Riemsdyk was coming down the middle. Van Riemsdyk had virtually an open net to shoot at, and he did not miss, giving the Flyers the lead.

Calgary tied the game in the third period in a classic case of the third man coming late that wasn’t picked up. In this case it was Jarome Iginla finding Alex Tanguay heading down the right side, whereupon Iginla drove to the net. Tanguay opened up and found Steve Staios coming down the path that Iginla paved and Darroll Powe not getting back quite quickly enough to bother Staios’ shot. Staios buried the puck in the middle of the net before Bobrovsky could reset himself, and all that was left was the real entertainment…overtime.

The extra session looked from the opening draw as if it would go without a score, neither team doing much in the first two minutes but probing around the outside of the defense looking for openings that weren’t there. Then, Mark Giordano was whistled off for holding the stick, and it looked as if Philly finally had their break – lots of open ice and a more nimble team than Calgary.

Barely a half minute into the power play, Mike Richards circled out and around the right wing circle and found a shooting lane. He wristed the puck through a crowd in front of Miikka Kiprusoff, sending the Flyers fans into ecstasy. Except…

There was the referee, immediately waving off the goal. And there was Chris Pronger in the middle of it, shouting at the referee. From our vantage (at the other end of the rink) I thought it was a case of Pronger knocking the puck in with a high stick, but the replay didn’t seem to indicate that his stick was over the crossbar or that he even touched the puck. He didn’t, as it turned out. Pronger was sent off for an unsportsmanlike conduct penalty (essentially a variation of the Avery Rule), a product of his waving his glove in Kiprusoff’s face moments before the puck came through.

It was quite a sequence – Pronger waving his glove (no doubt about that, although the party line was that he was directing traffic), Kiprusoff whacking Pronger in the back of the legs, the shot hitting the back of the net, Pronger’s liberal use of adult language in the direction of the referee when the goal was waved off (we thought this was the reason for the penalty), the fact that there was still a 3-on-3 situation Calgary had to negotiate that would last almost to the end of the overtime, and a power play that Calgary would have for the last 17 seconds.

It was almost surprising that overtime ended without some sort of odd goal scored off a referee’s skate or something, but end it did, leaving it to the shootout. Claude Giroux gave the home fans hope when he opened the skills portion with a backhand goal that looked almost too easy. After Alex Tanguay and Danny Briere exchanged unsuccessful attempts, Niklas Hagman redeemed himself for his being the victim of Zherdev’s goal by snapping the puck past Sergei Bobrovsky to tie things up. Mike Richards tried to end it with a backhand, but Kiprusoff was up to the task. That left things up to Rene Bourque, who skate in, froze Bobrovsky with a fake to his backhand, then snapped the puck past the goaltender, leaving him to look on either side behind him for the puck. It came to rest up in the netting above the skirt, and the game was finally over.

-- We were somewhat surprised all game long at the seeming lack of noise on the part of the Flyer crowd. Sure, they whooped it up for the two goals, but otherwise were rather docile. That is, until the overtime goal was waved off. And then we understood… no one, and we mean “no one” boos like a Philly crowd. There isn’t even a second place in this contest. That was the loudest, most sustained booing we’d heard, well, perhaps ever. It was almost constant from the moment the goal was wave off until Giroux potted his shootout goal, whereupon it started up again.

-- We have not seen Robyn Regehr much this season, but we were thoroughly unimpressed, and that doesn’t even include the gaffe behind his own net. He looked to have trouble keeping up with the speedy Flyer forwards.

-- Sergei Bobrovsky might be the real deal, but the one thing we noticed about him in this game was that he was not challenged high. It seemed every save he made was within 12 inches of the ice surface. On the few shots that were sent high, he did not defend them cleanly.

-- Pronger is a study in economy. OK, he looked like he jaked it on the Glencross shortie, but otherwise he knows when to coast and when to haul it. He isn’t a fast skater by any means, but he certainly does get to where he needs to be more often than not.

-- Perhaps it is a product of the fact that until recently the Flyers wore black as their home jersey, but we detected a discernible lack of “orange” in the stands. Not nearly the sea of home color one might see at Verizon Center.

-- Spectrum II/Core States/First Union/Wachovia/Wells Fargo Center is a big place, but it is uncommonly dark, and the seats in the upper bowl look to be a good deal further from the ice than those at Verizon Center.

It’s never a bad day when there is hockey, especially with family. And we can take some perverse glee in the Flyers taking one in the loss column, especially when the outcome was iffy in terms of an official’s call. But all things considered, we’ll be glad to get back to Verizon Center and watch the best team in the league… not the second best one.
Posted by The Peerless at 3:13 PM No comments: