The Peerless Prognosticator is ON THE AIR!!! -- Game 69: Hurricanes at Capitals, March 15th

The Washington Capitals are back home after a four-game, eight-day, 3389-mile road trip, once more in the embrace of the friendly confines of Verizon Center where they host the Carolina Hurricanes on Tuesday night in what used to be a critical Southeast Division matchup.  The divisions might have changed, but the stakes have not.  The Capitals are trying to get past a rough stretch of road that left them with a 5-4-1 record in their last ten games (2-1-1 on the four-game road trip).  The Hurricanes are in even tougher straits, fighting for their playoff lives as they embark on their last 13 regular season games of the season.

Carolina sits in sixth place in the Metropolitan Division, five points out of a wild-card playoff berth with two teams – the Philadelphia Flyers and the Detroit Red Wings – to climb over.  And, they have played the same number of games as Detroit (69), while the Flyers hold two games in hand (67 games played).

The Hurricanes come into this game with points in each of their last five games (3-0-2) , and they are in the midst of a recent stretch of games heavily weighted to the road side of the ledger.  They opened March with a pair of road games, a win in New Jersey and an overtime loss in Tampa before beating Ottawa at home in the Gimmick.  They took to the road again and won in overtime against Boston before dropping an overtime decision in Buffalo last Saturday night.  Their visit to Washington is the third game in a five-game road trip, games in Pittsburgh and Minnesota coming after Carolina visits the Caps.

Carolina played those last five games as close as can be.  The first of them, a 3-1 win over the New Jersey Devils, featured an empty net goal in the last half minute of play in what was a one-goal game.  Each of their last four contests have gone to extra time, the Hurricanes splitting the four decisions with their opponents.  Overall they outscored their opponents, 14-13.  And, their special teams have been effective, the power play going 4-for-13 (30.8 percent), while the penalty killers went 12-for-13 (92.3 percent).

Phil DiGiuseppe has had a nice run of his own of late.  He is second in scoring among the Hurricanes over their last five games (2-3-5), part of what is a solid rookie season.   He is 16th among rookie forwards in total scoring (6-10-16) despite playing in about half of the games (36) of every player ahead of him except Edmonton’s uber-rookie, Connor McDavid (14-21-35 in 34 games).  He is already among the top dozen rookies in franchise history in points since the Hurricanes established themselves in Carolina in 1997.  DiGiuseppe has a goal in two career games against the Caps.

We might be coming to the end of the Cam Ward era in goal for the Hurricanes.  Ward will be an unrestricted free agent at the end of this season, and after 11 seasons for the only team he ever played for, he might be moving on.  Ward is the Hurricanes’ version of the Capitals’ long-time netminder Olaf Kolzig, a player who had success when called upon to assume the number one netminding duties (Kolzig went to the Stanley Cup finals in his first year as full-time starter, Ward won a Stanley Cup in his first postseason) but who had to fight through some tougher times in the later stages of his tenure.  Of 44 goaltenders to play for the Hartford Whalers/Carolina Hurricanes franchise, Ward ranks first in games (557), wins (260), losses (206), shots faced (15,884), and minutes played (31,929).  Among goalies appearing in at least 50 games for the franchise, Ward ranks fifth in goals against average (2.70) and fourth in save percentage (.909).  He has had a rough go of it lately, going 3-4-1, 2.86, .897 in his last eight appearances, although he does have two wins and an extra time loss in his last three appearances.  Ward is 16-15-4, 2.63, .917, with four shutouts in 36 career appearances against Washington. 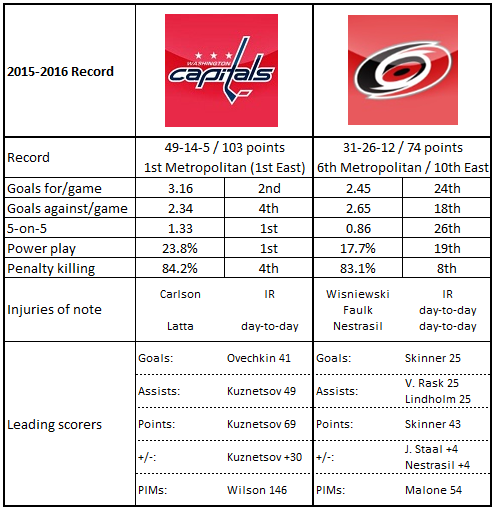 1.  No team has spent fewer situations shorthanded on the road than the Hurricanes (89).

3.  Carolina leads the league in credited takeaways (636) and has the best takeaway-to-giveaway ratio in the league (1.13:1).

4.  The Hurricanes are just one of four teams without a player to have reached the 45-point mark for the season.  Columbus, Toronto, and Detroit are the others.

5.  If the Caps think getting off their habit of slow starts will be easy against what amounts to a non-playoff team, hold off on that.  Carolina has the third best Corsi-for at 5-on-5 overall in the league in road games (51.6 percent).  The Hurricanes’ problem is that their possession numbers have out-performed their production; they are a minus-13 in goal differential at 5-n-5 on the road, tied for 23rd in the league (numbers from war-on-ice.com).

2.  Washington’s penalty kill is just as consistent, just in another way.  While the power play has had equal numbers of opportunities, home and road, the penalty killers have allowed equal numbers of goals, home and road.  They have allowed 34 goals in 101 shorthanded situations at home (86.1 percent kill rate), 34 goals in 114 shorthanded situations on the road (82.5 percent).

5.  If suppressing opponent’s possession opportunities has meaning, the Caps have some shoring up to do at home.  Washington has allowed the eighth-most shot attempts per 60 minutes on home ice this season (55.1), by rounding just ahead of Edmonton (numbers from war-on-ice.com).

With the balance of power among the Brothers Staal having shifted to New York at the trading dealine with Eric joining brother Marc in a trade from the Hurricanes, Jordan is the last remaining Staal in Carolina.  Jordan is under contract with the Hurricanes through the 2022-2013 season, which could mean that a Staal will have worn the red, black, and white of the franchise for 19 straight seasons (and no, that would not be close to the record for consecutive seasons for a brother act with one franchise; the Richards – Maurice and Henri – represented the Montreal Canadiens for 33 consecutive seasons).  Now in his fourth season in Carolina, Jordan has already tied his total points best for a season (40, set in 2013-2014) and has posted his best goal-scoring total (17).  The odd part of it is that he has had progressively lower average ice times over his four years in Carolina, averaging 20:06 in his first season, down to 18:03 going into Tuesday’s game.  He has been getting more time lately, topping the 20 minute mark in five of his last eight games, but he has just one point (a goal) to show for it.  Staal is 7-4-11, minus-5, in 36 career games against Washington.

On a very deep team, Justin Williams has quietly put together a rather impressive season.  His 20 goals is the first time he reached that plateau since he had 22 with the Los Angeles Kings in 2011-2012 (for what it’s worth, the Kings won the Stanley Cup that season).  His 27 assists and 47 points are also personal highs since that 2011-2012 season.  His plus-19 is already a career best, topping the plus-15 he had in 2012-2013 with the Kings.  And, he might be ramping up for a strong stretch run.  He has points in his last three games, and his goal against San Jose on Saturday broke an 11-game streak of games without a goal.  His six shots on goal against the Sharks was a season high.  Williams is 4-8-12, minus-2, in 21 career games against the team than once employed his services.

Washington is down to seven home games remaining in the season.  With 26 wins at home in 34 games they are within striking distance of the franchise record for home wins in a season (30, achieved in 1985-1986 and in 2009-2010).  They have been able to achieve their enviable home record by doing what they have done over all their games this season, avoiding consecutive losses in regulation time.  They lost their last game at home, a 3-2 loss to the New York Rangers, so this game represents an opportunity to avoid both consecutive losses in regulation at home and overall for the season.   There is also the matter of the Caps having lost – in regulation – to the Hurricanes in their last meeting back on New Year’s Eve.

So think of this as an opportunity on several levels for the Caps to reassert themselves as a team that dominates in the win column and avoids losing streaks.   If the team doesn’t need such affirmation, it would make the rest of Capitals Nation happy.