“I think goodbyes are sad and I'd much rather say hello. Hello to a new adventure.”
-- Ernie Harwell

Mike Green first took the ice for the Washington Capitals on October 12, 2005 in Carolina against the Hurricanes.  It was not an auspicious start for Green, nor was it a memorable evening for the Caps in general.  Green recorded 14 minutes and change in ice time, recording neither a shot on goal nor a point, finishing with one hit and two blocked shots in a 7-2 Caps loss.

However, in 574 games since that evening, Green ranks at or near the top in a number of statistical categories among defensemen in team history:
He is one of only 21 defensemen in Capitals history to record a shorthanded goal, and despite a record of injuries that robbed him of much of the most productive part of his career, he is fourth among active players on the team in games played with the club.

All of that is relevant because for Green and Capitals fans, the 2014-2015 season, if not The Long Goodbye, might be The Long Question Mark.  As an unrestricted free agent, would it be his last season with the Capitals?  That is a question that cannot be answered  in the here and now, but if the 2014-2015 season was Green’s last in Washington, he remained one of the best offensive defensemen in the league.  On a per game basis, Green finished as one of 10 defensemen who played in 70 or more games, averaged at least 0.10 goals per game, at least 0.45 assists per game, and at least 0.60 points per game.

Green remains one of the most consistent performers on the power play among NHL defensemen.  His 16 assists with the man advantage ranked tied for tenth among defensemen this season, an improvement on his 24th place ranking in 2013-2014 and consistent with his tied for 11th ranking in 2012-2013.  In this area, he improved as the season wore on.  Green had only two power play assists in over the first three ten-game segments of the season, but he recorded at least one in each of his last five segments, 14 in all.

It was part of a season in which Green, despite a diminished role as a third pair defenseman, still finished the season in the top-20 in total scoring among defensemen (45 points, tied for 16th).  There was the matter of that diminished role, though.  For the first time since the 2006-2007 season, his first full season in the league, Green averaged less than 20 minutes of ice time per game.  The drop in even strength ice time was more pronounced.  Coming into this season, Green had led the Caps’ defensemen in even strength ice time per game in six of the past seven years including the two years preceding this one.  This season his even strength ice time dropped from the 19:28 he recorded last season to 15:47, fifth highest on the club. 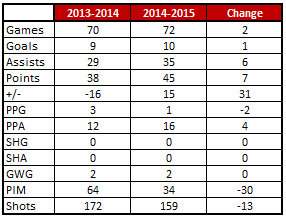 Fearless’ Take:  More than the ice time is the mix.  If you look at how Capitals defensemen spent even strength time with one another, one is taken by the consistency among the first and second pairs:

Then there was Green.  He did not spend more than 30 percent of his 5-on-5 ice time with any other Caps defenseman and spent 20 percent or more (rounded) with three defensemen – Nate Schmidt, Jack Hillen, and Tim Gleason. 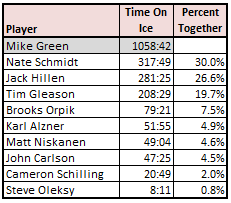 And it could be reasonably said that the three were of different types, Schmidt a youngster who is more energetic in the offensive end, Hillen a two way type who depends on guile and position far more than physical presence, and Gleason a physical stay-at-home defenseman (a sort of “John Erskine-lite”).  If Green was not quite the offensive force he once was, and if he did play a diminished role, he did it in challenging circumstances with the variety of partners he had.

Odd Green Fact: About that lone power play goal.  Mike Green scored it in his first game for the Capitals this season, back on October 11th in a 4-0 win in Boston over the Bruins.  Over his last 71 games and 197:07 in total power play ice time over those games, he would not record another.

Game to Remember: April 5th versus Detroit.  The Capitals clinched a spot in the postseason on this evening, technically, when the Ottawa Senators lost to the Toronto Maple Leafs in a Gimmick.  The Caps did not settle for backing into the playoffs, though.  Evgeny Kuznetsov scored a power play goal in the first period to give the Caps a 1-0 lead over the Red Wings.  In the second period, Green added to the lead with a blast from the top of the right wing faceoff circle.  It would be the margin of victory in the Caps’ 2-1 win over the Red Wings, Green’s second game-winning goal of the season.

Game to Forget: November 4th versus Calgary.  There was enough grief to go around for the Caps in what would be a 4-3 overtime loss to the Flames at Verizon Center, especially giving up a lead late in the third period.  It would be an especially difficult night for Green, however, who was on ice for all four Calgary goals, including the overtime winner with just 42.2 seconds left in the five-minute extra session.  Green’s minus-4 for the evening was his worst of the season.

At a performance level, Mike Green was reduced to being a virtual non-entity in the postseason.  Part of it was deployment (he had half the average power play ice time of John Carlson), part of it was shooting (he did not have a lower average shots per game – 1.93 – in a postseason since 2009), part of it might have been just dumb luck.  He had never gone through a second round of a postseason without a goal in his career, and only once did did he do so at all (the 2010 postseason in which the Caps were eliminated in the first round).  Then, as if the hockey gods were mocking him, he drew two penalties 2:39 apart in the deciding Game 7 of the series against the New York Rangers, the second of which resulted in the game-tying power play goal in a 2-1 Capitals defeat.

There is a whole generation of Capitals fans who know no other defenseman manning the right side on the top defensive pair (well, now the third pair) than Mike Green.  You can draw a bright line from Yvon Labre, to Rod Langway, to Scott Stevens, to Larry Murphy, to Kevin Hatcher, to Calle Johansson, to Sergei Gonchar, and finally to Green as Capitals defensemen who made a significant impact on the fortunes of the club over the years.

It is a nice memory, but the reality of 2014-2015 is that Mike Green is not, and is unlikely to become again that defenseman with this club.  He remains one of the most productive offensive defensemen in the game, and his two-way game – so often denigrated when he was putting up those big offensive numbers – has improved by leaps and bounds.  However, he is no longer the minutes-eater he was when he was younger, a concession to the depth the Caps finally have at the position and perhaps the injuries Green sustained over the years that robbed him of 96 games over the three seasons ending in 2013.

There is little reason, in a hockey sense, to think that Green would be any less productive a player over the next four or five seasons than he was this past season, and he was productive indeed, especially in his role (he might have been the best "fifth" defenseman in the league) and given the changing partners on his left side.  But he and the Caps are going to have to deal with some difficult arithmetic.  A player of his talent could still be a top-pairing defenseman on a number of teams, and he could command $6 million or more per year in the free agent market.  That is a number that the Capitals almost certainly cannot accommodate in their payroll structure.

The difficult arithmetic means that Green might share something else with those Capitals defensemen of the past.  Like Stevens, Murphy, Hatcher, Johansson, and Gonchar - all of whom would move on from the Capitals, albeit under differing circumstances - it could mean that Green will be moving on to a new city come July.  It will be sad for Caps fans, should it come to pass, and no doubt for Green as well.  But it would be a new adventure for him, too, and Caps fans would have the memory of having witnessed one of the best careers in the history of the franchise.