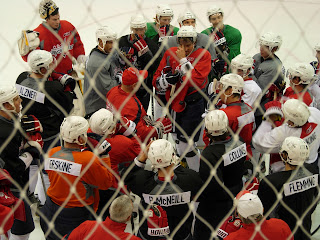 I’m hung up on words this afternoon… “matters” and “counts.”

The reason I’m engaged in mental gymnastics over words is a persistent theme, not spoken too loudly, but discernible nonetheless. And it’s one we’ve sung before, too. That is the theme that “noting matters until the spring.”

Alex Ovechkin came to camp last year expecting to play himself into playoff shape in time for the playoffs. We (and no doubt he) saw how that worked. It was a year that saw his numbers drop and a playoff that was – again – disappointing. This year, he came to camp in better condition, and while he hasn’t yet exhibited an offensive explosion along the lines he displayed regularly in the 2009-2010 season, he is still the second ranked point getter on the top offensive team in the league.

Bruce Boudreau was accused often last year of being a bit (or more than a bit) soft on his players – optional practices and practices that might not have been as hard or focused as they could have been. This year, camp was all business, and practices seem to have a point, not the least being that attending to business is the object of the exercise. And his sitting Marcus Johansson in the opener after a so-so camp sent a signal that last’s year’s operating model isn’t this year’s. It has had the intended effect on Johansson’s game, if not the whole roster.

Last year, the Caps had a stunning lack of killer instinct. Too often they let teams smack them around early (they were outscored, 60-54, in the first period of games and allowed the first goal in 47 of 82 games). Even though they outscored teams by an 89-63 margin in the third period and overtime of games last season, one didn’t get the sense they pulled away and stood on the necks of those opponents. This year so far, the Caps are outscoring opponents by more than two goals a game and have outscored them by about two-to-one in each of the three periods in games so far.

It is true that when these guys were putting up big numbers, the spring was an unfriendly time of year for them. But this team looks different. There isn’t the “devil may care” fun-loving air that surrounded those teams of big numbers and big disappointments. This team looks hungrier. Outscoring teams by a roughly two-to-one margin in each period speaks toward a clearer display of a killer instinct than they expressed in previous seasons.

But that is only through seven games. The trick is to use these last 75 games of the regular season, not only to build an impressive record and qualify for the playoffs, but to develop the good – winning – habits that champions have. To do the right things the right way, in practice and in games. To avoid the temptation to take shortcuts that comes from depending more on innate skill than hard work. To make these good habits instincts, not something you try to learn in the first week of April when the playoff seedings come out.

And that, dear reader is why, the regular season “matters.”  How the Caps treat this regular season will go a long way toward finding out whether it "counts" for anything in the spring.
Posted by The Peerless at 2:53 PM No comments: