The Washington Capitals made it five wins in a row and ten in a row on home ice, defeating the Vancouver Canucks, 3-1, at Capital One Arena on Tuesday night.

Vancouver opened the scoring mid-way through the first period when Daniel Sedin tipped an Alexander Edler drive on a 5-on-3 power play.  It was a lead that lasted less than seven minutes, John Carlson tying the game with a shot from the top of the right wing circle that snuck through a maze of bodies and past goalie Jacob Markstrom at the 15:13 mark.  The goal was reviewed to determine if the net was off its pegs, as it was tipped just before the Carlson shot and leaning over Markstrom.  The replay showed that the net returned to its moorings, and the goal stood.

Lars Eller broke the tie four minutes later when he took a feed from Madison Bowey just outside his own blue line, weaved his way through the Canuck defense in the neutral zone, carried the puck over the Vancouver blue line, and snapped a shot through the legs of defenseman Ben Hutton and over the shoulder of Markstrom to make it 2-1 at the 15:13 mark.

Evgeny Kuznetsov had the only goal of the second period on an odd play.  His initial shot from the inside edge of the right wing faceoff circle was stopped by Markstrom, but the puck popped into the air in front of him.  In his effort to swat the puck out of harm’s way, defenseman Eric Gudbranson managed only to bat the puck off Markstrom’s shoulder and into the net to make it 3-1 at the 4:57 mark.

-- Only one player for the Caps had penalty minutes, but Devante Smith-Pelly got his money’s worth.  He took a hooking penalty in the first period, and then in the third period, coming to the defense of Brook Orpik, who was decked by Ben Hutton, he was whistled for an instigator, fighting, and instigator-misconduct penalty.  He finished with 19 minutes in penalties for the night.  The other Caps penalty was a bench minor for too many men on the ice.

-- Jakub Vrana and Tom Wilson each had six shots on goal to lead the Caps.  For both it was a season high in shots on goal.

-- Evgeny Kuznetsov had a goal…nice, but not uncommon.  He had ten faceoff wins (in 16 draws).  That was the fourth time this season he had double digit wins in the circle, something he has now done once a month (October, November, December, and January) this season.

-- Chandler Stephenson did not have a shot attempt in 9:37 of ice time (low for the club).

-- As a team, the Caps registered eight points from eight different players.  Fourteen of 18 skaters finished as “plus” players, Smith-Pelly the only one with a plus-2.

-- Jay Beagle had an odd night, losing nine of 11 draws, his worst winning percentage in any game this season (18.2 percent).

-- The Caps won their 18th game of the season on home ice, tying the Vegas Golden Knights for the league lead.

On one hand, it might be looked at as a solid, workman like win.  Okay, there were too many instances of trying to make the pretty play instead of just pounding pucks at the net against a team that has been very leaky lately.  And the goals were a bit odd.  A tipped net here, an own goal there, a between-the-defenseman’s-legs goal in between.  Still, two points is two points, and the Caps are now four points clear of the Columbus Blue Jackets in the Metropolitan Division.  It sets the Caps up well for a back-to-back, home-and-home set with the Carolina Hurricanes later this week.

Posted by The Peerless at 10:18 PM No comments:

The Peerless Prognosticator is ON THE AIR!!! -- Game 43: Canucks at Capitals, January 9th

The Washington Capitals take to the ice for the middle game in their three-game home stand this week when they host the Vancouver Canucks at Capital One Arena on Tuesday night.   Unless you have been hiding under a rock from the cold that has gripped the mid-Atlantic region, you know that the Caps are on a roll, particularly at home where they have won nine games in a row and lead the Eastern Conference in home wins with 17 (the Vegas Golden Knights have 18 in the West).

Meanwhile, the Canucks arrive in Washington on a slide, having lost four in a row, eight of their last nine, and 12 of their last 14 games, a stretch low-lighted by three separate four-game losing streaks (2-10-2). One need look no further than goals allowed to see the problem for Vancouver. In their 2-10-2 slump, the Cannucks allowed 62 goals, a whopping 4.43 per game. Only four times have they allowed fewer than four in that run.

Predictably, the goaltender numbers in this stretch are ghastly. Jacob Markstrom has both wins in the 14-game run, going 2-5-2, 3.51, .886 in ten appearances. And his is the better record of the two Canuck goaltenders in this stretch.   Anders Nilsson is 0-5-0, 5.04, .872 in six appearances. It has to be considered odd that both goaltenders would see their save percentages crater simultaneously since before this rough patch, Markstrom had a .917 save percentage in his first 20 appearances with a shutout, and Nilsson had a .922 save percentage in nine appearances with two shutouts. Neither netminder has had much success against the Caps. Markstrom is 0-5-0, 3.51, .887 in five career appearances, while Nilsson is 1-3-1, 3.30, .890.

Brock Boeser continues to impress on the offensive side of the ledger.  The league leader among rookies in goals (22) and points (40), the team’s misfortune over their last 14 games has not been his, at least in putting up numbers.  In those 14 games he is 9-6-15, although like 20 of the 22 skaters over that stretch, he is on the minus side of the plus-minus ledger (minus-2).  Boeser has points in 11 of those 14 games, including a four-point night in a 5-2 win over the Chicago Blackhawks on December 28th.  Boeser had three assists in the Canucks’ 6-2 win over the Caps on October 26th, his only appearance against Washington.

The only Canuck on the plus side of the plus-minus ledger in their 2-10-2 slide is center Brendan Gaunce, the surprise of it being that he dressed for all 14 games in going plus-1 (no other Canuck appearing in all 14 of those games is better than a minus-2, that being Boeser).  Gaunce was a 26th overall pick in the first round of the 2012 entry draft by the Canucks, eventually making the parent roster in the 2015-2016 season.  His progress was derailed late last season with a shoulder injury that caused him to miss the last 15 games of the regular season last year and the first 13 games of this season’s schedule.  He has not been a big producer upon his return to the lineup, going 1-1-2, even, in 26 games this season.  But he has not been a noticeable liability over the past month for the Canucks, and that is a plus at the moment.  He is without a point and is minus-1 in two career games against the Caps. 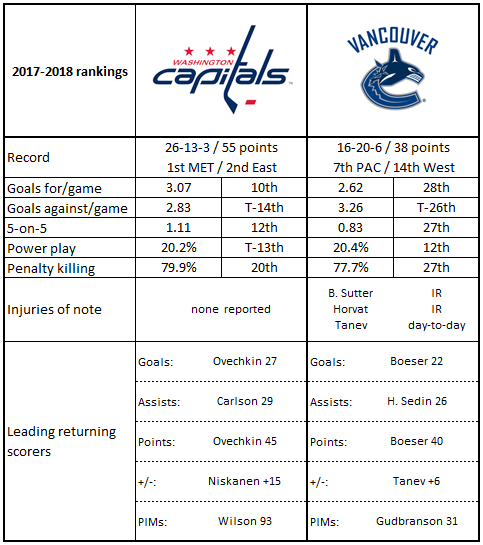 2.  Vancouver’s power play in their slump has been respectable (8-for-43/18.6 percent), but their penalty kill has been awful. Not only have they had to defend nine more shorthanded situation (53) than they have skated on the power play (43), but they killed those penalties at just a 73.1 percent rate (38-for-52).

3.  Goaltenders have been targets in an arcade game for the Canucks in their slump, facing 34.4 shots per game over the 2-10-2 slide.

1.  The Caps riding a nine-game home winning streak going into this game.  Over that span, no team has scored more goals on home ice than the Caps (38, tied with Colorado, who did it in 11 home games), and their plus-18 goal differential is second only to the Boston Bruins (plus-21 in nine games on home ice).

2.  Washington is one of four teams with a home power play over 30 percent since they started their nine-game winning streak at home (30.8 percent).  San Jose (35.5 in six home games), Winnipeg (33.3 percent in eight home games), and Pittsburgh (32.4 percent in 10 home games) are the others.

3.  Possession has not improved much for the Caps in their home winning streak.  Their 48.55 percent shot attempts-for at 5-on-5 on home ice over that span ranks 24th in the league.

4.  The Caps have the best shooting percentage in the league on home ice in their nine-game winning streak.  Since it started, it is 13.9 percent, topping the Bruins’ 12.6 percent in nine home games over the same span of time.

Thomas Vanek is in his 13th season in the NHL after being taken as the fifth overall pick by the Buffalo Sabres in the 2003 entry draft.  Vanek justified that pick over his first four seasons, establishing himself among the elite goal scorers in the NHL.  He topped 35 goals three times in that span with the Sabres, and his 144 goal total was ninth-best in that four-year span.  Since then, however, he has not reached the 35-goal mark in any season, and in his first year with the Canucks he is skating for his seventh NHL team.  “Well-traveled” is an apt description for Vanek at this point his career; he has skated for four different teams over the past four seasons (Minnesota, Detroit, Florida, and now the Canucks).  He is on a one-year/$2 million deal with Vancouver, so moving on could be in his future once more, either at the trading deadline or as a UFA next summer.  He is on a pace to finish this season with his first 20-goal season since 2014-2015 with Minnesota (21), but he is not the goal scorer he was in his early years.  In 39 career games against the Caps, Vanek is 12-15-27, plus-9.

Scoring gets the attention, but there are more ingredients to success in hockey.  In the Caps’ nine-game home winning streak, Devante Smith-Pelly is the only forward to record at least 20 hits (20), ten blocked shots (10), and 15 shots on goal (17; Matt Niskanen has hit those marks for the defense).  Ha also has a pair of goals and five points skating 12 minutes a game over that nine-game streak.  He has an opportunity in this game to become the eighth player for the Caps this season to record at least ten points on home ice (he is 4-5-9).  That performance at home is pushing him onto a pace to challenge his career high in goals overall (14; he has six) and points (25; he has 13).  He has quietly made himself into a reliable second or third tier scorer.  Starting with his 14-goal season in 2015-2016, he has averaged 14 goals per 82 games, putting this season squarely in that area.  Smith-Pelly is 1-4-5, plus-3, in 14 career games against Vancouver.

The 6-2 loss in Vancouver last October seems a long time ago, especially given the hard times on which the Canucks have fallen.  This could be one of those game in which, if the Caps show up to compete, it could be ugly early for the Canucks.  They are giving up goals, not in bunches, but in buckets.  Worse, Vancouver has allowed the third-most first period goals in the league this season (42).  On the other side, there are 12 Capitals who have appeared in at least 10 games on home ice with a shooting percentage over 10 percent.  Vancouver might stiffen up and play to the caliber of their opponent, or the Caps might play down to the caliber of theirs.  But all other things being equal, the Caps should roll in this one and return the favor.