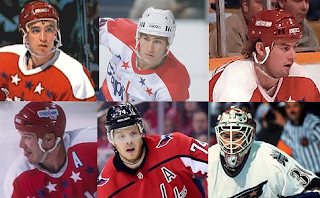 For the record, our "All-C Team" was:

This team, Jim Carey’s playoff woes and too-soon career implosion notwithstanding, is among the stronger teams in the “All Alphabet” series, especially on offense.  Courtnall had 77 goals in two seasons with the Caps.  Bobby “The Can’t Miss Kid” Carpenter had 145 goals in four seasons with the Caps before his 22nd birthday before he tailed off and was eventually shipped off to the New York Rangers.  Dave Christian averaged more than 30 goals per season in his six full seasons with the Caps.  Sylvain Cote is seventh in team history among defensemen in games played and eighth in points.  John Carlson is already the all-time points leader among defensemen in Caps history and whose career plus-92 trails only Rod Langway (plus-116) at the position.  In goal, Jim Carey finished second for in Calder Trophy voting as a rookie and was a Vezina Trophy finalist in both of his two full seasons in Washington, winning it in 1996.

Among skaters, Courtnall would seem in be in a position to fend off any challenges among left wingers who played for the Caps since the original “All-C Team” was published in 2014.  Only Jason Chimera (82-115-197, minus-2 in 490 games) would appear to pose even the faintest of challenges.  Neither Paul Carey nor Sean Collins pose much threat to unseating Bobby Carpenter from his place at center.  Meanwhile, Brett Connolly (52-44-96, plus-27, in 217 games with the Caps) would be most likely among right wingers to pose a challenge to Dave Christian, but he would fall short.

On defense, the pair of Taylor Chorney and Connor Carrick would pose no reasonable challenge to Sylvain Cote and John Carlson.  In goal, Pheonix Copley has far too few games and too thin a resume to challenge Carey.

The "All-C Team" would seem to remain intact from when the series was first published in 2014 and would be a formidable group, were it ever to have played on the ice.