The Peerless Prognosticator is ON THE AIR!!! -- Caps vs. Penguins, January 14th

We’re here at Peerless Central for the second half of a back-to-back prognosto, this one to cover tonight’s tilt between the Pittsburgh Penguins and the Washington Capitals. It will be the latest installment of a blood feud between those steely-eyed boys from the Hatvechkins and the McMalkins clans – Alex and Geno. And to get a take on what these kinds of feuds mean, we found a couple of ornery old coots from the original feud of the species, the Hatfields and the McCoys…Billy Bob Hatfield and Joe Bob McCoy. Gentlemen, welcome…

“T’ain’t no gentlemen here but me, Mr. Peerless.”

“Who ain’t you callin’ a gentleman you old hog thief?”

"Who else is sittin’ here…”

OK, boys, save it for the country…we’re wondering about this feud between Alex and Geno. What starts these things? Billy Bob?

“They all gets started when some sorry, low-down, two-faced, worthless runt o’ the litter gets all uppity and thinks he’s better’n his betters.”

Joe Bob, you have somethin’..uh, something to add?

“Yeah, well, all I knows is that some folks ain’t got the sense God gave a turnip and shouldn’t be talkin’ none about anybody bein’ anybody else’s betters…”

I see, so what we have here, it seems, is a couple of guys who are eyeing up each other thinking the other is trying to knock him off the top branch.

“I don’t know anything about a top branch other’n that’s where I knocked off a buzzard with one shot from t’other side o’ the valley one time, why I…”

“There you go, braggin’ about what a great shot you got…why, you ain’t never shot no buzzard outta no tree. Why…I jus’ saw you pickin one up of’n the road just last week, just another easy pickin’ prize you talk like you shot from the next county.”

“Oh, yeah…well, sometimes you gotta put some rascals in their place.”

“You couldn’t shut a screen door.”

“You wouldn’t know how to shut a screen door.”

“Only if you can figure out which end of the gun to point, y’idiot.”

Well, we’re glad we got that insight into the makings of a feud…guess we’ll never figure out how these things start, but start it did, and Alex Ovechkin and Evgeni Malkin will renew it this evening at the Polyp on the Descending Colon of Pennsylvania – Mellon Arena.

Pittsburgh hopes that last night’s 4-2 win over the Philadelphia Flyers represents an end to their recent struggles that saw them lose seven of eight games and go 6-14-0 since the end of November. The skid has left the Penguins languishing on the outside looking in at the playoff seeds with 38 games left to play. The numbers so far, look like this… 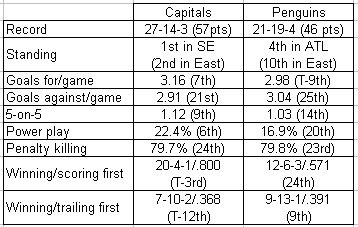 What is striking about this is the inability of the Penguins to start well in games. They have taken first leads in only 21 of 44 games, a surprising number given their offensive talent, and they are only 19th in first period goals scored. Compare that to Washington’s comparative ability to get out to leads (25 times in 44 games) and to score in the first period (44 goals, tied for third in the league). The first thing to look for tonight, especially in a road game, is whether the Caps can get out to a lead and keep the crowd quiet. True, the Caps let the Penguins run out to a 3-0 lead before the game was 22 minutes old before winning 4-3 the first time the clubs met in Pittsburgh this year, but that is not generally going to be a consistent recipe for success.

It would be tempting to look at that 20th ranked power play for the Penguins and think the Caps indifferent penalty killing would get a break here. But the Penguins are humming at over 20 percent on the man advantage at home (11th in the league), and the Caps are tied for second in most shorthanded situations faced on the road. Note to coaches…write in big letters on the white board: STAY OUT OF THE PENALTY BOX!

You might want to include the exclamation point…the boys’ attention seems to have been wavering some lately.

It is after that when things get dicey for this team. Petr Sykora is the third leading scorer on this team and leads the team in game winning and power play goals. In the 7-14-0 run the Penguins are on since the end of November, his production has to be characterized as inconsistent. He has four multi-goal games (in scoring 11 overall), but has stretches of three (twice) and four games without one. And, despite leading the team in power play goals (six), he has only one in his last dozen games. Sykora is 7-15-22 in 35 career games against the Caps.

With Ruslan Fedotenko out with a broken hand, more of the scoring load on the wing would be expected to fall on the shoulders of the other winger that came to the Penguins from the Islanders in the off-season – Miroslav Satan. He’s given the Caps fits in the past (29 goals in 45 career games against Washington), but he’s gone dry of late. He has no goals in his last 13 games – only one goal against a team with a .500-plus record since November 6th – and has been moved around among the forward lines to either get him jump-started or to remind him that he’s not been giving what is expected of him.

On the back line, the Penguins have missed the services of Sergei Gonchar for the entire year so far and have had Ryan Whitney dress for only 11 games. But what the Penguins have missed in terms of experience on the blue line they have made up for with stability. Four Penguins defensemen have played at least 40 games; six have played more than 30 (compare that to one and three in those numbers for the Caps). The scoring is led by youngsters Alex Goligoski and Kris Letang, a pair of defensemen built for the post-lockout NHL (you may read that to mean, “slightly built puck movers”). The big dog in the yard, though, is Brooks Orpik. He won’t score a lot (2-10-12 this year), but he leads the entire NHL in hits and is 14th in blocked shots. He has matured to the point where he picks his spots to deliver a hit with much more discretion and he has improved in the manner of a defensive defenseman.

In goal, Marc-Andre Fleury got the nod last night in the win in Philadelphia, so it might fall to Dany Sabourin to get the call tonight. However, Fleury would bring a 7-1-0, 2.23, .931 career record against the Caps into tonight’s game. He did take the loss in the 4-3 meltdown in Pittsburgh last October 16th, when the Caps scored three third period goals to snatch the win.

On the other hand, Sabourin has only one career appearance against Washington ( a no-decision) in which he allowed four goals on 13 shots (8.57, .692).

Maybe Fleury will get the call afterall.

For our money, this is the most underrated defenseman in the league. He won’t show up in the usual statistics (he is 1-8-9 in scoring, but he leads the defensemen in plus-minus (+9), had taken only eight minutes in penalties this year, leads the team in blocked shots, and is second among defensemen in takeaways (although that is not a statistic this defense can call a hallmark), all in 20 solid minutes of work a night. He is just a solid, dependable, consistent player. You know you’re going to get the same level of performance most every night. He could draw the top-line defensive responsibilities tonight.

Well, here we are…after the big December, and it’s like the credit card bill has been delivered to the Caps. After going 11-3-0 last month, they are 3-3-0 to start the new year, all three losses coming in succession as they head into Pittsburgh. But these aren’t your father’s Caps, the ones that lost all the time to the Penguins when it mattered. There aren’t any Caps who have been party to any of those playoff meltdowns. In fact, it seems now that the players consider the Flyers a more heated rival, which takes us back to the 1980’s in a way. And in the 1980’s, the Caps owned the Penguins. So you know what that means…