As long as hockey is played in Washington, Devante Smith-Pelly’s game-tying goal in the third period of Game 5 of last season’s Stanley Cup final will be among the most celebrated plays in team history.  It was a spring full of clutch goals for DSP.  Of the seven he had in the postseason – a career best – two were game-winners, two others tied games (including the goal in the Cup-clinching Game 5 against Vegas in the final), and one other gave the Caps a lead (the only goal he scored in a loss, in overtime to Columbus in Game 1 of the opening round series).

In addition to earning him the everlasting gratitude of Caps fans, it earned him a one-year/$1 million contract with the club last June, a raise of $350,000 over his expiring contract.  One might have thought that Smith-Pelly was going to be one of the mainstays among the bottom six forwards, lightening the burden of losing fellow forward Jay Beagle to Vancouver in free agency.  But in our prognosto last September, we were left with the “Big Question”… Can Devante Smith-Pelly use the 2018 postseason as a springboard into 2018-2019?  Two weeks after posting that prognosto and raising that question, there were ominous signs.  There were reported to be conditioning issues that put the player behind the curve in getting ready for the new season.  It would be a hole out of which Smith-Pelly found difficult to climb.

Smith-Pelly’s ten-game segments reflect those difficulties.  He managed more than two points in only one of the six segments in which he played and had none in the last two of those segments.  Although he did dress for the Caps’ first 37 games of the season, he was just 4-4-8, minus-1.  He dressed for 20 of the next 26 games, did not record a point, and posted a minus-5 rating.  On February 20th he became an odd casualty of the trading deadline, the Caps choosing to place him on waivers to free up a roster spot and cap room in anticipation of further moves.   Smith-Pelly cleared waivers and was assigned to Hershey where he remained for the rest of the regular season, going 6-8-14, plus-2, in 20 games with the Bears. 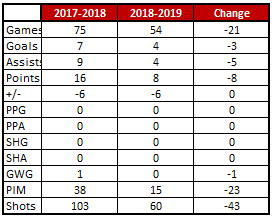 Fearless’ Take… When he skated more, the team remained successful.  True, that might reflect the team being able to roll four lines more often, but in the 18 games in which Smith-Pelly skated at least 11:30, the Caps were 14-3-1.

Cheerless’ Take… It was a season that started bad and pretty much stayed there.  Numbers-wise, it was might have been his worst NHL season, slightly worse than the season he spent in New Jersey that ended with the second year of his contract being bought out three days before he was signed by Washington (4-5-9, minus-19, in 53 games).

Devante Smith-Pelly, like many other Capitals, celebrated the Opening Night banner raising contest against the Boston Bruins by entering a crooked number on the score sheet, in his case recording an assist in a 7-0 win.  However, over his next 11 games he recorded only one more point, a goal in 6-5 Gimmick loss to the Florida Panthers on October 19th.  Smith-Pelly wasn’t alone in dealing with a slump.  Over those first 12 games of the season the Caps were just 5-4-3, and they took a two-game losing streak into Game 13 against the Edmonton Oilers.

Washington opened the scoring early on a play started by Travis Boyd.  Skating into the Oiler zone, Boyd cut around Ryan Strome and put a shot on net that was turned aside by goalie Cam Talbot.  Smith-Pelly collected the loose puck at the goal line to the right of Talbot, circled, and threaded a pass through three Oilers to Jakub Vrana cutting down the middle.  Vrana one-timed the puck past Talbot to give the Caps a 1-0 lead 2:44 into the game.  Three minutes later, Smith-Pelly and Boyd worked together again.  Smith-Pelly started the scoring play by sweeping the puck off the stick of Strome along the right wing boards.  Boyd picked it up and circled into the slot.  He faked a shot and dropped the puck for Smith-Pelly trailing the play.  Smith-Pelly snapped a shot high over Talbot’s glove and under the crossbar to make it 2-0, 5:44 into the first period.

Although Edmonton did climb back to make it a one-goal game twice, the Caps scored a power play goal to make it a 4-2 game late in the second period and made that lead stand up for the final score.  For Smith-Pelly, the two-point game was his first and only one of the season, and it was his first and only two-point game as a Capital, regular or postseason.

It can be an occasion for a player to return to a place he called home, if only briefly, while skating for another team.  Such was the case for Smith-Pelly when the Caps visited Bell Centre in Montreal in mid-November.  Smith-Pelly skated for the Canadiens for 66 games over two seasons in 2014-2015 and 2015-2016, posting seven goals and 15 points.  And, Smith Pelly had a decent, if thin record over his career against Montreal, going 1-3-4, plus-2, in seven games.

The clubs battled back and forth, exchanging first period goals, and then throwing haymakers in the second period, Montreal scoring the first two goals of the period and the Caps replying with three to take a 4-3 lead into the third period.  The Caps looked as if they might escape with the win as the clock ticked down to three minutes remaining.  However, Smith_Pelly was one of several Caps who could not tie up Jesperi Kotkaniemi enough in front of the Caps’ net to prevent him from converting a centering pass into the tying goal with 3:03 left.  Montreal scored again in the last minute to take the lead, and then added an empty net goal to steal a 6-4 decision out from under the Caps.  Smith-Pelly finished the game with one shot on goal and was a minus-1 in 11 minutes of ice time.

Postseason…  With the opening round of the playoffs between Washington and Carolina tied at two games apiece, the Caps recalled Smith-Pelly from Hershey.  If it was an attempt to recapture the magic he displayed in the 2018 postseason, it did not have the desired effect.  Smith-Pelly skated in Games 5-7, did not record a point, and posted two shots on goal while averaging 9:47 in ice time.

Devante Smith-Pelly’s one-year contract with the Caps is expiring.  Given the step back his game took this season after the superb postseason he had in 2018, it would appear that he will not be re-upped by the team, even though the team expressed some conditional willingness to re-sign him.  The salary cap arithmetic, given the restricted free agents that the club will have to consider, does not seem to argue for a new deal unless he takes a substantial cut in pay.  Arguing in his favor, however, is that the Capitals are thin in forward prospects who otherwise might be counted on to contribute with a smaller salary cap footprint.

Devante Smith-Pelly is one of the more curious players in Caps history despite having been with the club only two seasons.  His regular season production has been of the sort that makes for frequent stops in a career (Washington is his fourth team in eight NHL seasons.  Even in his best statistical season in 2015-2016 (14-11-25), he played for two teams (Montreal and New Jersey).  However, in three postseason trips before this year, he had 13 goals in 50 games, including the seven he had in 24 games with the Caps in the 2018 playoff run.  It might be worth noting that he played those three postseasons for three different teams (Anaheim, Montreal, and Washington), but he is certainly capable of bigger things in the regular season than he has displayed, especially in this most recent one that has to be considered a disappointment.  It makes for a difficult decision for the Caps, one of many they will have to make this off-season.

Photo: John McDonnell/Washington Post
Posted by The Peerless at 12:00 PM No comments: