Hey, everyone else has done it (including this recent edition), and there isn't a lot else to talk about, so... 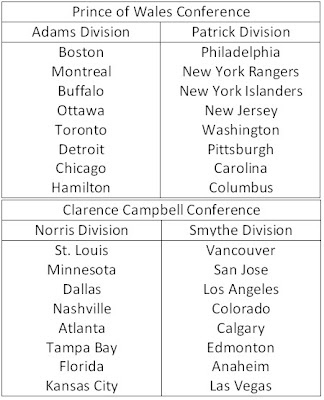 We're not bothering with waiting for the NHL to decide to go the way of the NFL and 32 teams, we just went ahead and settled this Phoenix mess (they're now Hamilton) and put teams in Las Vegas and Kansas City to put that to rest, too.
Oh, and enough of the geography lesson every time I look at the standings. We want some old school conference and division names...and speaking of divisions, our playoffs include the first two rounds as intra-divisional play. There is nothing like beating up on your divisional opponents for a few games in the playoffs to build up that hate among players and fans that seems to be missing from too many divisions (well, the Southeast, anyway).
Hey, my realignment, my rules.
...unless you don't like it, then I'll blame it on Fearless and Cheerless.
Posted by The Peerless at 8:35 AM 3 comments:

What's wrong with this picture?

OK, yeah, the 11th spot in Allan Muir's "NHL Power Rankings" at SI.com seems way low for the Capitals, but that's not it.

Huh? It's August, dill weed. How can the Caps -- any team, for that matter -- rise, fall, or be abducted by aliens in August? Did the Caps lose a free agent last week? Did Alexander Semin sign in Russia last weekend when we weren't looking?

And we can't even hazard a silly wild-assed guess as to why it is that Calgary went up seven spots from "last week" (unless by "last week," you mean, "before Jay Bouwmeester was signed" or "last May"), or how the Flyers jumped eight spots.

August... when the world of hockey goes insane.

Thanks to Japers for pointing the way to this.