Washington Capitals: That Was The Week That Was -- Week 18

Week 18 was “Getaway Week” for the Washington Capitals, the last week of play before their league-approved bye week in the schedule.  And a good one it was, the third time this season that the Caps swept a four-game week and the fifth time this season they won all of the week’s games.  When it started, they had a five-point lead on the Metropolitan Division and a three-point lead on the rest of the league.  When it ended, the lead was nine points in the division and six over the rest of the league.  Hard to argue with those results. 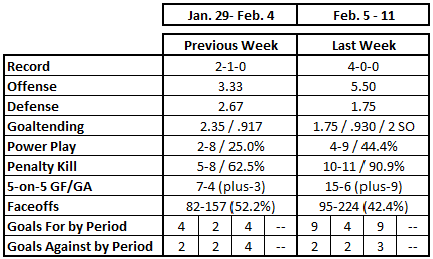 The Caps faced a mix of teams in Week 18, two Eastern Conference teams on the outside of the playoffs looking in, and two teams from southern California trying to maintain their playoff spots despite spending a lot of time on the road by the time they arrived in Washington.  The Caps began and ended the week facing the teams from SoCal, both of which presented the challenge of playing a “heavy” game that could compete with that of the Caps.  What the Caps had that the their physical opponents did not was speed and depth of skill, both of which were on display as the Caps inched closer to a .500 all-time record against Los Angeles (22-23-7-1) and hitting the .500 mark all-time against the Ducks (8-8-0-1).

The games against the Hurricanes and Red Wings in the middle of the week ended as one might have expected with a team near the top of its game playing the two teams at the bottom of the Eastern Conference standings.  The Caps wrapped up their season series against Carolina with a 5-0 win that was their third in a row following a 5-1 loss last November, the Caps winning those last three games by a combined 15-4 margin.  Their 6-3 win over the Red Wings was their second in the three-game season series, which will wrap up when the Caps return from the bye week next Saturday. 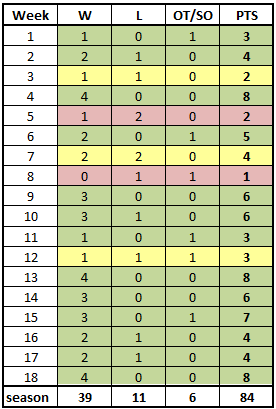 With 22 goals in four games, the Caps are rushing up the league scoring offense rankings, finishing Week 18 second only to the Pittsburgh Penguins in scoring offense.  They scored five or more goals in all four games for the week, extending their streak of such games on home ice to 11, tying the all-time record for consecutive games on home ice with five or more goals, the record having been held by the 1970-1971 Boston Bruins.

Twelve different Caps recorded goals for the week, T.J. Oshie and Marcus Johansson leading them with four apiece.  Johansson had goals in each of the week’s four games, the first time he accomplished that feat in his seven-year career.  The thing about goal scoring for the week generally was the balance among the forward lines.  There were 14 5-on-5 goals scored by forwards in Week 18, three from the first line, four from the second line, six from the third line, and one from the fourth line.

The Caps had 18 different skaters share in the points for the week, Johansson (4-4-8) and Nicklas Backstrom (2-6-8) leading them with eight apiece.  Backstrom’ output enable him to reach the 700-point mark for his career.  With 702 points, Backstrom ranks fourth in team history in points, trailing only Mike Gartner (789), Peter Bondra (825), and Alex Ovechkin (1,017).  He finished the week tied with Pittsburgh’s Sidney Crosby for second place in the league’s points rankings (60), just one point behind Edmonton’s Connor McDavid.  Washington got points from four defensemen for the week, Matt Niskanen (0-3-3) and John Carlson (1-2-3) leading that group.

The Caps had a very good week playing defense, at least in terms of allowing opportunities.  They did allow the Los Angeles Kings 38 shots on goal, a total exceeded by only one opponent this season (Winnipeg had 45 shots on goal in a 3-2 win over the Jets on November 1st).  But the Caps allowed the last three opponents a total of just 62 shots on goal, holding each of them to fewer than 25 shots.  The three straight games holding opponents under 25 shots was the first time this season the Caps did that in three consecutive games.  And, there was a consistency in it.  Washington held their last three opponents to ten or fewer shots in every period, nine straight in all.

It made for a good possession week, especially as the week went on.  Los Angeles dominated the Caps in 5-on-5 shot attempts, 65-31, even as the Caps outscored the Kings, 5-0, at fives.  In the last three games of the week, Washington had a Corsi-for of 58.54 percent at 5-on-5 and held opponents to just 41.10 shot attempts per 60 5-on-5 minutes (numbers from Corsica.hockey).

It was a bit of an odd week for the Caps netminders, or more specifically for Braden Holtby.  It started, though, with a superb performance by Philipp Grubauer against the Los Angeles Kings, a 38-save shutout.  Grubauer seems to be getting back into a groove since he allowed three goals in three consecutive appearances in January.  In his last two outings he stopped 64 of 66 shots (.970 save percentage), even though he split the decisions.

Braden Holtby started the week in a style to which he and Caps Nation has become accustomed – a 23-save shutout of the Carolina Hurricanes, his seventh of the season, tying him for the league lead with the Kings’ Peter Budaj.  Then he hit a skid.  In the last two games of the week he allowed seven goals on 39 shots (.821 save percentage).  It did not keep him out of the win column, and the three wins for the week made it 14 wins in his last 14 decisions (he had two no-decisions in that run).  Over those 16 appearances, in addition to the 14-0-0 record, Holtby has a goals against average of 2.01, a save percentage of .924, and four shutouts.  Having allowed almost a quarter of those goals (seven of 30) in his last two appearances suggests that the bye week might be coming at a good time for him.

As it is, the Caps still have the only two goaltenders on one club with at least 750 minutes played and a save percentage higher than .925.  The two shutouts for the week made it ten for the season for the Caps, a new team record, eclipsing the nine shutouts the team recorded in the 1995-1996 and the 2014-2015 seasons.

The Caps have slowly and steadily been inching up the league power play rankings, and Week 18 was another rung on that ladder.  Going 2-for-8 for the week lifted the Caps in to a tie for fifth place (with Montreal) in the league on the power play and with a better overall percentage (22.1 percent) than they finished with last season (21.9 percent).  It has been part of an extended run in which the Caps are 17-for-45 (37.8 percent) over the last five weeks spanning 17 games.

The Caps got solid work out of their number one unit, getting two of the goals from T.J. Oshie and one each from Alex Ovechkin and Marcus Johansson.  Nicklas Backstrom had three assists, Johansson and Matt Niskanen each recording a pair, and Ovechkin getting one.

Overall, the Caps had a modest week in terms of efficiency, getting 12 power play shots on goal in 14:45 of power play ice time.  Two-thirds of that total came from Ovechkin and Oshie (four apiece), with Andre Burakovsky, Marucs Johansson, Nicklas Backstrom, and John Carlson recording one apiece. 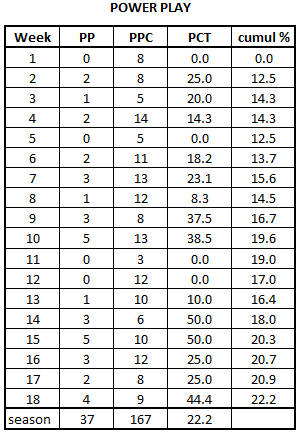 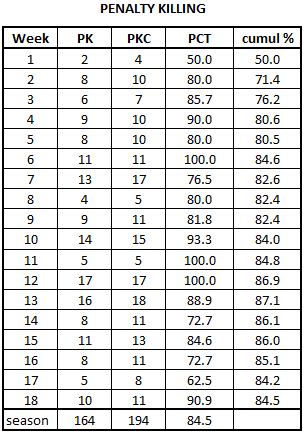 It was not a good week in the faceoff circle for the Caps in Week 18.  The bet they could muster in any of the four games was splitting 62 draws down the middle in the 6-3 win over Detroit in the third game of the week.  They were clobbered by Carolina (36.4 percent wins) and Anaheim (38.2 percent) and were easily bested by Los Angeles (44.2 percent).  The Caps did not win any of the zones for the week, winning just 39.5 percent of their offensive zone draws, 46.8 percent of their defensive zone faceoffs, and 42.4 percent in the neutral zone.  The only zone they won at all was going 11-for-18 in the neutral zone against Detroit.

The goals by period for the week were typical, if in an exaggerated way, for the Caps.  In each of the four games, the Caps recorded multi-goal first periods, getting three against Anaheim in the last game of the week.  Detroit managed to post a pair of goals in the first period of their game against the Caps, but that only tied the game after 20 minutes.  It left the Caps with a plus-38 first period goal differential for the season, easily the best in the league (Columbus is plus-24).

The second period was not as dominant, the plus-2 differential being the product of low scoring on the Caps’ part.  They held opponents to just two second period goals but scored only four of their own.  Those two goals allowed came in the Anaheim game to end the week.  As it was, the Caps scored goals in 11 of the 12 periods for the week, getting shut out only in the middle period of the 5-0 win over Carolina last Tuesday.  On the other side, they shut out opponents in eight of the12 periods in Week 18. 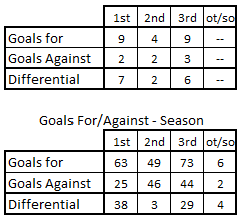 Week 18 had a lot going on.  The Caps kept that offensive juggernaut going with four more games with five or more goals on home ice.  There were the two shutouts, but there were the two games in which the Caps allowed opponents to come back after taking a lead (twice against the Red Wings, and against Anaheim after twice getting out to three-goal leads).  There was the rare absence of an Alex Ovechkin shot on goal in a game (against Detroit, the first time in almost four years and only the seventh time in his career).  There was a special guest of the club.  There was Marcus Johansson scoring in every game.  There was Andre Burakovsky suffering and injured hand blocking a shot against the Red Wings that will put him on the shelf until mid-March at the earliest.  There was the stinginess in shots allowed, but there was the odd domination of attempts by the Kings.  It was a lot to take in for the last week before the bye week.  A lot to chew on in addition to all the free and discounted food Caps fans could take advantage of in Week 18.