The defensemen and goalies taken care of, what’s next guys?...Forward, march! 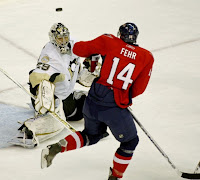 Eric Fehr
Last year: 23 games, 1-5-6, +4
Career average (per-82 games): let’s wait until he plays 82 games…
Feerless’ take: OK, success in juniors doesn’t translate cleanly into success in the AHL (although it did for Fehr, until he was injured), and it certainly doesn’t mean NHL success is a given. But here’s a guy whose goal-scoring progression went “11-26-50-59” in juniors, then went “25-22” (the latter in half a season) in the AHL. He hasn’t yet turned the red light on with any frequency in his three brief stints with the Caps (three goals in 48 games), but it’s hard to imagine his being a total bust in this regard at the NHL level. For this year, he could end up getting time on the right side on any of the four forward lines. What has been encouraging about him, in the absence of instant success in netting goals, has been that he has taken to his other responsibilities (generally in fourth line duty) well. He’s given the appearance of hustling when asked to forecheck, and he’s been pretty responsible defensively. Here is your odd Eric Fehr stat from last year…despite playing in only 23 games, he was tied for fifth among forwards in plus-minus. This could be the year he passes Tomas Fleischmann on the forward prospect depth chart and establishes himself as a top-six winger, perhaps in a position to replace Viktor Kozlov in that role in time for the 2009-2010 season.
Cheerless’ Take: He’s buried on the depth chart, cuz, a scoring winger with four guys ahead of him on the right side. And he might be the most famous “what if” in Caps history after Joe Sakic (that being the “what if the Caps didn’t trade for Dale Hunter and kept the pick that was used to pick Joe Sakic?"). In his case, it’s “what if the Caps picked Ryan Getzlaf – picked with the next selection in the 2003 draft by Anaheim – instead of Fehr?” But let’s not even go there…let’s remember that a right wing also picked by Anaheim – Corey Perry – has 208 games of NHL experience to 48 for Fehr. Yeah, I know, I know…part of that is the injury problems Fehr had a couple of years ago that stunted his development. But the clock’s ticking. He’s got guys who might be crawling up behind him from the prospect pool pretty soon – Bouchard, Andrew Gordon, Kugryshev. He’s in the last year of his contract – he needs to play like it.
The Peerless’ Take: Last year, Mike Green was a 22-year old with 92 games in the NHL, three goals, and carrying around the sign that said, “prospect.” We know what he did. This year’s Green among the forwards could be Fehr. A lot depends on how the Caps deploy their forwards. Right now, they have enough for three scoring lines – Ovechkin, Semin, and Fleischmann at left wing; Backstrom, Nylander, and Fedorov at center; and Kozlov, Clark, and Laich on the right side. If there is a potential opening in this scheme, it is on the right side – Fehr is a right wing. If the Caps deploy a more traditional two scoring line, one checking line, one “energy” line set up, Fehr has a tougher nut to crack. He has not registered a point thus far in the preseason, and this might set him squarely behind the other right wings on the roster. But what has impressed in his short stays with the club over the past three seasons is that while he hasn’t yet flashed the goal-scoring that he did in junior and at Hershey, he hasn’t shirked the other responsibilities of his game. Perhaps now, with his having filled out some to take the abuse and the grind a power forward has to endure, he is ready to add that part of his game that is expected of him. We just wonder if he now has too many rungs on the depth chart to climb to have that kind of a “breakout year” that Mike Green had last year.