“Happiness is brief. It will not stay. God batters at its sails.”
-- Euripides

On Opening Night of the 2013-2014 season, there was Philipp Grubauer standing between the pipes as the puck dropped.

That was as it was supposed to be and might have been for Grubauer in the 2013-2014 season, being the number one goaltender as the Bears set off in pursuit of their 12th Calder Cup.  Things, however, took a turn.  First, Grubauer appeared in only nine of the Bears’ first 17 games.  In those nine games Grubauer was 4-4-1, 2.60, .910, with one shutout.  This work profile is one to which we will return, but at this point in the season Grubauer was about to undergo a significant change in his duty station.

On November 30th Grubauer was recalled to Washington after Caps goalie Michal Neuvirth was injured in warm-ups before the Caps’ November 29th contest against the Montreal Canadiens (the Caps won, and Brett Leonhardt got another turn as emergency backup goalie to Braden Holtby).  Holtby would get the next start, on November 30th, but Grubauer got his chance, so to speak, on December 3rd when he relieved Holtby for the third period of a 4-1 loss to the Carolina Hurricanes.

Grubauer got his chance to start in a Sunday evening game at Madison Square Garden on December 8th against the New York Rangers.  Not exactly being eased into a start.  Grubauer stepped up, though, and held the Rangers to one goal on 31 shots, outdueling Rangers’ goalie Henrik Lundqvist in a 4-1 win.

It would be an important performance in Grubauer’s development.  That start, coupled with the struggles of Braden Holtby, would begin a run in which Grubauer would appear in 13 of 17 games, posting a record of 6-2-5, 2.11, .934.  He was, for the moment at least, the Caps’ number one goaltender.

Not that Grubauer’s run was without its moments, but much of it (as so much seems to have been with respect to goaltenders on this club) was outside of his control.  Grubauer’s run started with Holtby struggling and Neuvirth injured.  Neuvirth was sufficiently rehabilitated from his injury by mid-December so that the Caps were carrying three goaltenders on the parent roster.

That was a problem that the club inflicted on itself,  but a solution presented itself when, as fast as Grubauer assumed the number one role it disappeared.  On January 17th in Columbus, Grubauer allowed three goals on 14 shots in less than 22 minutes of work in a 5-1 loss to the Blue Jackets.  He was put right back in the saddle in the Caps’ next game a rematch with the Rangers.  It did not prove an effective therapy.  Grubauer allowed three goals on eight shots in less than 18 minutes.  The following day, he was reassigned to Hershey, but only after then general manager George McPhee decided that enough was enough with the three-goaltender arrangement.

Grubauer would get one more appearance in Washington, a relief stint in early March after Braden Holtby allowed four goals on 18 shots in a 6-4 loss to the Philadelphia Flyers, but it was a brief respite from pursuing his apprenticeship in Hershey. 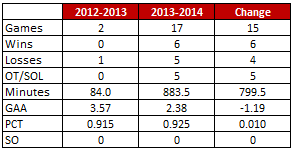 Fearless’ Take… There were 12 rookie goaltenders in the NHL who appeared in five or more games this season.  Philipp Grubauer finished fourth in goals against average (2.38), and third in save percentage (.925).

Odd Grubauer Fact… Philipp Grubauer is one of only five goaltenders since the 2004-2005 lockout to appear in 15 or more games and post a save percentage of .925 in either their first or second year in the league.   The others are Cam Talbot, Martin Jones, Niklas Backstrom, and Jonas Hiller.  No, Henrik Lundqvist did not do it; he had a .922 save percentage in his 2005-2006 rookie season.

Game to Remember… December 27th versus  New York Rangers.  In the Capitals’ last game before the Christmas break, Philipp Grubauer was given a 2-0 lead to protect against the Anaheim Ducks.  He didn’t. The Ducks scored single goals in the last half of each of the three periods, the last one coming with 5:36 left in regulation as the Ducks took a 3-2 win.  It made for an interesting prologue to the first game coming out of the break.  How would the youngster respond to that setback?

Grubauer answered the challenge in the first game after the holiday break.  The Rangers peppered him with 14 shots in the first period without finding the back of the net as the Caps took a 1-0 lead into the first intermission on a power play goal by Mike Green.  The Rangers scored on their first shot of the second period, a power play goal by Benoit Pouliot on a deflection of a Brad Richards shot.  However, Grubauer turned aside the last 17 shots he faced in the period, allowing the Caps to regain the momentum.  The Caps took advantage of Grubauer’s strong play to score late in the period on a goal by Nicklas Backstrom.

Grubauer was victimized early in the third period on a shorthanded goal 17 seconds into the period by Carl Hagelin to tie the game, but it would be the last time the Rangers would celebrate a goal that evening.  Grubauer turned aside the next seven shots he saw, and Eric Fehr scored what would be the game-winning goal for the Caps with 5:09 left in a 3-2 win.  For Grubauer it was a 38 save effort, including 35-for-35 at even strength.  After sustaining what was his first regulation loss of the year against Anaheim and the Caps looking to stop a skid in which they lost three of four games, it was a fine effort on the young goaltender’s part.

Game to Forget… January 17th versus Columbus.  When Philipp Grubauer led the Caps onto the ice at Nationwide Arena in Columbus, he was in the midst of staking a claim to be the Caps’ number one netminder.  He had a record of 6-2-5, 2.06, .936.  When he left the game 21:44 into the game the Caps would lose by a 5-1 margin, having allowed three goals on 14 shots, his goals against average jumped to 2.21, and his save percentage dropped to .931.

It was the first time Grubauer had been pulled after starting an NHL game.  It would not be the last.  Grubauer was pulled after allowing three goals on eight shots in just 17:49 of work in his next start, that coming against the New York Rangers in what would be a 4-1 loss.  Grubuaer was reassigned to Hershey the following day.

It was quite a journey for Philipp Grubauer in 2013-2014, not one without its twists and turns.  But one thing seemed to be consistent this season, his game developing cracks as his tenure wore on.  It happened with the Caps, when he started strong but ended up being pulled in consecutive games before his reassignment to Hershey.  Then, it happened in Hershey as the weeks wore on after his reassignment.  It suggests that there is still some development to be made with respect to Grubauer, even if one considers him as a bona fide candidate to be a backup in Washington next season.  What fans saw in 2013-2014 was a goalie with promise, but one who remains a work in progress.

Posted by The Peerless at 7:19 AM No comments: