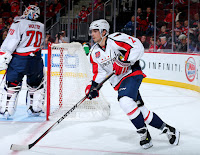 “The battlefield is a scene of constant chaos. The winner will be the one who controls that chaos, both his own and the enemies.”
-- Napoleon Bonaparte

When last we saw Matt Niskanen on the ice in a game that mattered, he was in the low slot trying to defend a shot by Pittsburgh Penguin Carl Hagelin that somehow snuck between his legs, and as he turned to his next defensive assignment to clear away any rebound, he saw Nick Bonino tuck that rebound past the right pad of Washington Capitals goalie Braden Holtby for the game-winning, series-clinching goal in the Eastern Conference semifinals.  The Caps went home for the summer; the Penguins went on to win the Stanley Cup.

That is the chaos in which Matt Niskanen and most players in the NHL live.  Niskanen and the Caps have found the task of navigating the chaos one that can be mastered in the regular season over the past two years.  The Caps and Niskanen have expressed a certain consistency.  In each of the last two seasons, the Caps topped the 100-point mark in the standings.  In both seasons, Nickanen appeared in all 82 games, and he posted remarkably similar top-end numbers.  In 2014-2015 he was 4-27-31, plus-7; while in 2015-2016 he was 5-27-32, plus-10.  As we pointed out in looking at his ten-game splits at the end of last season,  those ten-game splits were remarkable for their consistency in points produced (no fewer than three, no more than five in any ten-game segment).  In the land of chaos, Niskanen was an island of constancy.

The playoffs have been another matter.  In each of the last two seasons the Caps and Niskanen reached the second round, but advanced no farther.  Niskanen has yet to record his first postseason goal as a Capital, having gone 26 games over the last two postseasons without finding the back of the net.  Niskanen has not been an especially efficient shooter for the Caps, his 3.4 percent shooting percentage the lowest among the three teams for which he played in the NHL. But even with that shooting percentage in the postseason, he would have had a playoff goal or two.

That is the thin margin on which success and disappointment live, because as in many instances of supplemental scorers, even on defense, Niskanen’s contributions mattered.  The Caps were 5-0-0 in the regular season last year when he scored a goal, 23-1-4 in games in which he recorded a point.  He was also a capable possession player, posting a Corsi-for at 5-on-5 of 51.12 percent, following on a 51.95 percent year in 2014-2015 with the Caps.

Niskanen has not only been durable for the Caps, appearing in all 164 regular season and 26 postseason games since joining the club, but he has been a minutes-eater, too.  He averaged 24:40 in ice time last season, the third highest total among Washington defensemen in the post-2004-2005 lockout era for the Caps.  He led the Caps defensemen in both even strength and shorthanded ice time per game and was second among that group in power play ice time (to John Carlson).  He is the only Capital defenseman in the post-2004-2005 lockout era to have appeared in at least 50 games in a season and averaged 19 or more even strength minutes, more than two power play minutes, and more than two shorthanded minutes per game.

The Big Question… Is there a little more in Niskanen’s game, especially in the postseason?

Well, there are two months in a playoff season.  For a Cup finalist that’s about nine weeks, about 25 games.  That means if you just get one goal, maybe two – a knuckleball, a shot off a post, you get a shot from the point with eyes…just one, maybe two…and you’re skating around the rink with a Cup.

If Niskanen replicated his postseason shooting percentage with the Dallas Stars and the Pittsburgh Penguins with the Caps, it would have meant just one goal on 39 shots.  But that one goal, at the right time, might be the difference in a game or a series.  Remember, this is a team that was eliminated in overtime in each of the past two seasons.  That’s how thin that margin can be between success and disappointment.

Matt Niskanen hasn’t had that seeing-eye puck in the postseason.  He’s hardly alone, and the Caps haven’t advanced past the second round in the last 11 trips to the postseason.  Niskanen is hardly a cause.  He is a symptom.  He and the team just haven’t found that lucky bounce or fluke goal that propels them onward.  He has never been a big goal scorer, even by defenseman standards.  Only once has he reached double digits in goals in a season (2013-2014 in Pittsburgh).  But if he can find the net once or twice at the right time, the Caps could find themselves making lives disappointing for others.  Maybe it’s just a case of finding a way to control the chaos.