The Peerless Prognosticator is ON THE AIR!!! -- Game 67: Capitals at Kings, March 8th

Well, Game 1 of the California Experience did not go well for the Washington Capitals, losers of a 4-0 decision on Tuesday night to the Anaheim Ducks, their first shutout loss in Anaheim since they lost a 3-0 decision on December 11, 2002, a game noteworthy because two future head coaches in the NHL dressed for the Ducks that evening – Dan Bylsma (Pittsburgh, Buffalo) and Adam Oates (Washington). The Caps would follow up that 2002 loss with a win in Arizona against the Phoenix Coyotes.

The Caps hope to duplicate that pattern of following up a shutout loss with a win when they visit the Los Angeles Kings on Thursday night. As rough as the Caps record has been of late (10-9-4 in their last 23 games), they have not lost consecutive games in regulation on the same road trip since Games 19 and 20 back in mid-November, when they dropped decisions to the Nashville Predators (6-3) and Colorado Avalanche (6-2).

Meanwhile, the Kings can’t figure out if they are hot or cold. They had a six-game losing streak in early January (0-6-0) followed by a 6-1-1 run. Then they lost three in a row (0-3-0). Then they won three in a row…two losses…three wins. That they lost to the Chicago Blackhawks in their last outing, a 5-3 margin at home, might be viewed as an encouraging sign by Caps fans.

And frankly, the Kings are not an especially successful team on home ice. Their 16-15-3 record at STAPLES Center ranks 23rd in the league through Tuesday’s games. It might be worth noting that while the Kings cling to the last playoff spot in the Western Conference, they are the only team among the league’s bottom ten clubs in home points earned that is playoff eligible in either conference as of Wednesday morning.

Another King having a rebound year is Tyler Toffoli. After finishing the 2016-2017 season with just 16 goals in 63 games (he missed 19 games to a lower body injury), he is second on the club this season with 21 goals in 66 games. A pleasant response, from a Kings perspective, for having signed a three-year contract extension last June. He has been a surprisingly, perhaps, prolific goal scorer who, in just his sixth season with the team, has a chance to jump into the top-20 all-time in goal scoring. He would need nine goals in his last 16 games to tie Tom Williams for 20th place on the Kings’ all-time goal scoring list. That he could do that, however, seems unlikely given his recent performance. He has only three goals in his last 24 games, although two of those have come in his last five contests. Toffoli is 1-4-5, minus-1, in nine career games against Washington. 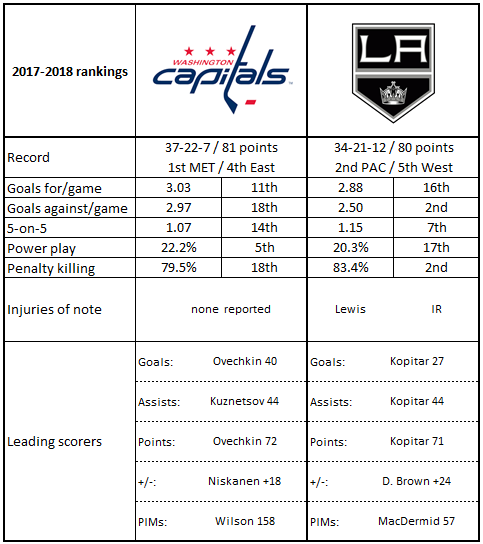 1.  Only the Edmonton Oilers have had fewer power play chances on home ice (90) than Los Angeles (91). Maybe a good thing for the Caps; the Kings rank tenth in home power play efficiency (24.2 percent).

2.  Los Angeles has the second best penalty kill in the league overall (83.4 percent), but it ranks only seventh on home ice (84.8 percent).

5.  Los Angeles might be just as happy for this game to go to overtime. The Kings have won nine of 14 extra time games this season, including both of their trick shot competitions. They have not lost an extra time in the 2018 portion of the season (2-0-0, last loss a 3-2 overtime loss to Vegas on December 28th).

1.   “Does not work or play well with others”… the Caps are tied for the league lead in misconduct penalties (eight).

3.  The frustration continues. The Caps are just 2-for-31 on power plays on the road against Western Conference teams this season (6.5 percent). The last one was November 16th in Colorado against the Avalanche. Fat lot of good it did them; the Caps lost, 6-2.

5.  No forward in the league averages more ice time per shift than Alex Ovechkin (0:57). Evgeny Kuznetsov is second among forwards (0:55).

There might not be a player in the league who has skated harder minutes for more games than Dustin Brown. Now in his 14th season, all with Los Angeles, Brown has appeared in 1,029 games, more than any player in Kings’ history except Luc Robitaille (1,077) and Dave Taylor (1,111). He has been a gritty sort who has exhibited a remarkable durability. Since the 2005-2006 season, Brown has not missed more than four games in any season. Over that same span he established himself as a reliable secondary contributor, averaging a shade under 20 goals per season. Although that production dipped in recent seasons (51 goals over four years coming into this season), he has 19 goals in 65 games so far, his highest goal total since he had 22 in 2011-2012. He is also a plus-24, a career best for Brown. Over his last 19 games his goal scoring has been unremarkable (four), but he has nine assists, significant contributions in the Kings’ 12-7-0 record in that span. Brown is 2-7-9, even, in 17 career games against the Caps.

Here we go again. Just when you think Andre Burakovsky might be shaking off whatever it is holding him down, he slumps under the weight again. After one goal in his first 14 games this season, he had a pair against the Dallas Starts, and folks might have thought, “here we go.” Well, there he went…nine games after that without a goal. He had goals in consecutive games at Winnipeg and At Minnesota last month, only to go his next three without one before another set of consecutive games with goals against Florida and Buffalo. Since then, Burakovsky is four games without a goal and counting. If there is a silver lining with respect to the game at hand, it is that he has scored six of his eight goals on the road this season. Three of his eight goals have come against Western Conference teams (Dallas, his only two-goal performance, Winnipeg, and Minnesota). It certainly would be good to get him on a more productive path since the Caps are 8-2-2 in the 12 games in which he has a point this season. In four career games against Los Angeles, Burakovsky is 1-1-2, plus-4.

The Caps have a game in hand to go with their one-point lead over Pittsburgh, and they have a two-point lead over Philadelphia with both teams having played 66 games. That’s hardly a cushion, especially since the Penguins and Flyers face one another on Wednesday night. Flat crust pizzas are thicker. Worse, there are eight teams with better records in their last ten games in the Eastern Conference than the Caps’ 5-5-0 record. Even Buffalo has a better record (5-4-1). These games with Los Angeles and San Jose to close the California trip, and a meeting with the Winnipeg Jets when they return home, make up a difficult part of the schedule for the Caps. But in it lies an opportunity, too. It is a chance to measure themselves against playoff-quality opponents, and after this stretch the schedule starts to open up a bit in terms of competitive strength. Winning such games can provide the Caps with the momentum they need to wrap up the season on a high note. But California being what it is to this team, it sure won’t be easy.

Posted by The Peerless at 7:30 PM No comments: