Countdown to Opening Night by the Elements: Number 19

Less than three weeks to Opening Night, and Fearless is now in the teens in the periodic table of the elements.  Which Cap will he find to match to…

Potassium is one of those elements you really do not want to leave lying around in the open.  Oh, it looks harmless enough, a soft silver-white metal.  But leave it out in air, and you are going to have a world of problems.  It is extremely reactive with water (even water vapor in air), generating both extreme heat and intense light.

It is really impressive on the ooh-ahh scale.  In addition to its reactivity with water, there is the demonstration most any high school chemistry student has seen – potassium permanganate is placed in a bowl, and glycerin is added to it.  After five or ten tense seconds, the mixture will ignite with a bright purple-hued flame.  One would get similarly violent results mixing potassium permanganate with hydrogen peroxide (warning: DO NOT…REPEAT, DO NOT TRY ANY OF THIS AT HOME! GO WATCH IT ON A YOUTUBE VIDEO)

It makes sense, in a cosmic sort of way.  Potassium, you see, is created in a rather violent manner in supernovas as a product of nuclear fusion.  Here on Planet Earth, it has been in use in a variety of forms dating back to the Roman Empire.  Salts of potassium were known as such and distinguished from salts of sodium (which resembles potassium chemically) as far back as the early 18th century.  However, it took another century for potassium as a metal to be discovered.  Sir Humphrey Davy (who we just saw in our look at calcium) is credited with the discovery.

While potassium has some violent and intense reactivity characteristics, its applications are rather common – fertilizer, industrial cleaners, gunpowder, and a process called “saponification (production of soaps from fats and lye, produced from carbonates of potassium -- potash).” Of course, there is also potassium nitrate or “salt peter,” a substance thought to induce impotence (pure legend).

It is, however, an essential nutrient.  As potassium chloride it can serve as a substitute for table salt.  It is found in baking powder and in food preservatives.  It is critical to efficient brain and nerve function, in regulating fluid and electrolyte balance in the body, and preventing muscle contraction, for example.

Potassium… an element with a robust ooh-ahh factor, and has its place in biological applications but one with less brilliant uses in the physical world.  It sounds like a limited-use forward to can provide some life to a moribund team from time to time with his “reactive” style of play, making life difficult for opponents in a physical way.

Potassium…the “Aaron Volpatti” of the elements of the periodic table. 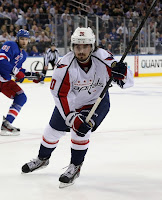 Marcus Johansson was taken 24th overall by the Washington Capitals in the 2009 entry draft, right between Tim Erixon and Jordan Caron.  Today, Johansson has played in more games that both combined (183 to 137), has three times as many goals (33 to 11), has almost three times as many points (95 to 32).  In fact, out of the 2009 draft class Johansson ranks fifth in goals (behind John Tavares, Matt Duchene, Evander Kane, and Ryan O’Reilly) and fifth in points (behind the same four players).

And yet, for a number of Caps fans, it is not enough.  He’s too soft, he’s the passenger on the Backstrom-Ovechkin express, he’s…something that just does not seem right.  He is also a player who will not turn 23 years old until the first week of the NHL season.  Part of the problem might derive from the fact that when Johansson was drafted out of Farjestads Bk Karlstad in Sweden, his countrymate Nicklas Backstrom had just finished posting a sophomore season that ended 22-66-88.  To that point since the 2004-2005 lockout, only four players recorded more points in their sophomore season: Sidney Crosby, Alex Ovechkin, Eric Staal, and Evgeni Malkin.  Caps fans might have been thinking about a decade or more of center play with a distinct and high-powered Swedish influence.

It was probably disappointing to discover that Johansson and Backstrom were as different as players as their hair color was.  Backstrom was putting together a resume that looked like a classic playmaking center – heavy on assists, being a distributor who could chip in goals – with a solid defensive aspect to his game.  Johansson did not move up through the Swedish hierarchy of leagues quite as quickly, was not drafted as high as Backstrom (who was taken with the fourth overall pick in 2004), did not post numbers equal to Backstrom’s rookie season (Backstrom was a Calder Trophy finalist), and was giving evidence of being more of a player who depended on his speed and skating ability to create what offense he could.

What he has in common with Backstrom in their early careers, other than the country of their birth, is steady improvement.  His goals per game has been a constant (0.19, 0.18, and 0.18 in his three seasons), but his assists have increased from 0.20/game to 0.40 to 0.47 over those same three seasons.  Part of that, no doubt, is skating on a line alongside uber-finisher Alex Ovechkin.  However, Johansson has been efficient in his own right, shooting to a career 14.2 percent.

Johansson, in a quiet way, gave opponents grief last season.  Only Alex Ovechkin among Caps forwards playing in at least 20 games drew more penalties per 60 minutes at 5-on-5 (1.5) than Johansson (1.3).  The delta between his penalties drawn and penalties taken per 60 minutes (+1.2) was far and away the best among Caps forwards.  That ability should not be underestimated, given the ensuing results on Capitals power plays – they led the league in efficiency.

You’d sure like to see better possession numbers out of him.  He was seventh among 15 Caps forwards playing in at least 20 games last year in relative Corsi (difference between Corsi/on-ice and Corsi/off-ice) at 5-on-5.  And he had the worst team on-ice save percentage among all forwards at 5-on-5 (numbers from behindthenet.ca).  Someone has to be last, and it’s not all Johansson’s fault, but it sure would be nice to have all the offense with the top line on the ice coming from the Caps.

You’d like to see him shoot more, too.  He had nine fewer shots than Wojtek Wolski in seven more games played.  For a guy who finished fourth among all Caps forwards in shooting percentage, it might be good if he took more advantage, especially since his shots per game was 20 percent below what he did in his rookie season.

The Big Question… Can Johansson develop as a threat on his own on the left side to take some pressure off his linemates?

Johansson’s goals per game in his first three seasons in the league have been almost unchanged (0.19, 0.18, 0.18), this despite his shots per game dropping from 1.48 in his rookie season to 1.13 in his second season and 1.13 last year.  One might chalk up last year’s result to their being only so many shots available on any line, and Alex Ovechkin records most of them on the top line (we don’t subscribe to that notion, but it sounds good).  Johansson could carve out a bigger slice of shots by expanding the population of shots on goal.  That means he is going to have to become stouter, bolder, better able to fend off checks and win battles for pucks when they occur to maintain or gain possession for his line.

Marcus Johansson is a tantalizing player in this respect.  Last year was more or less two separate mini-seasons within its own mini-season.  In the first, he played in nine of the Caps first 11 games and went 1-0-1, minus-7.  Small wonder; he was suffering the effects of a concussion, likely sustained when he collided with Alex Ovechkin in training camp in January.  Johansson returned after finally acknowledging the physical problem and sitting out 12 games.  After his return he finished 5-16-21, plus-10 in 25 games, a 16-52-67, plus-33 pace over 82 games.  Yes, it was a mini-season in a mini-season, but that is what makes it tantalizing.  One wonders if that was merely a blip on Johansson’s resume or if he is poised to take the next big step in his developmental arc.

Johansson might not be progressing as fast as some Caps fans like, but his improvement has been steady and consistent.  He compares favorably in terms of his career offensive production to date with his draft cohort.  He is not a dominating player, but he does not have to be on this team. He complements his linemates well and has the skating skill to carve out a bigger role on that line.  It would be the next step on Johansson’s royal road of development.

Countdown to Opening Night by the Elements: Number 20

Fearless had to take a break from the exhaustive work that is winding through the periodic table, but he’s back to take a crack at number 20 among the elements and the Washington Capitals…

If you look at all the elements that comprised our planet, calcium is the fifth most abundant in the earth’s crust. You would also find that it is the fifth most abundant element dissolved in seawater. Among all the metals it is not especially hard. It will react with water, but not especially vigorously. It occurs naturally as a compound (with phosphate) to form the business portion of human bones and teeth. As a compound with carbonates it can be found in limestone, chalk, or marble.

Calcium has had its applications for quite some time. In the form of lime it had been used as a building material going back several millennia. It was not isolated as an element, however, until the early 19th century. That honor went to Sir Humphrey Davy, and English chemist, who might be better known for having invented the miner’s lamp that allowed them to work safely in the presence of flammable gases. Davy made the discovery of calcium just before Jöns Jakob Berzelius (a Swedish chemist…what a surprise), who was working with calcium compounds trying to isolate the element.

By itself, calcium has few applications – an alloying agent and cheese-making among them. But calcium forms any number of compounds with a wide variety of uses: cement-making, insecticides, ice removal, a sweetening agent, propellant for rockets, textile production, blackboard chalk, paints, fluorescent lighting, fireworks, and paints among them.

It is also a necessary element for living processes, such as muscle contraction, bio-electrical processes in the body, and blood clotting, in addition to its presence in healthy bones and teeth.

What we have is an element that is not the hardest metal we have in the table, one that has limited value on its own but that can be quite useful and diverse when in combination with others. Fifth most abundant element in the earth’s crust and seas. Sounds like a defenseman who might be a bit undersized, but who might make his contributions when paired with the right partner. Good enough to get the fifth most average ice time among defensemen in the 2013 season.

Calcium… the “Jack Hillen” of the elements of the periodic table.

Posted by The Peerless at 5:43 PM No comments: