The Peerless Prognosticator is ON THE AIR!!! -- Game 33: Senators at Capitals, December 22nd

The Washington Capitals begin Christmas week by returning home to Verizon Center after a three-game road trip on which they went 2-0-1.  The Ottawa Senators come to town to provide the competition in what will be the Capitals’ ninth consecutive game against an Eastern Conference opponent.

The Senators come to Verizon Center takinga meandering path through their schedule.  After a five-game losing streak (0-4-1) coming out of the Thanksgiving break, the Senators are 4-2-1 in their last seven games.  It is a stretch in which they found it in themselves to beat the Bruins in Boston, 3-2 in a Gimmick on December 13th, but also had it in them to lose to the Buffalo Sabres, 5-4 in another trick shot competition.

Leading the Senators in scoring over their recent 4-2-1 run is Mike Zibanejad with four goals and four assists.  He has two multi-point games in those seven contests, including a four-point (2-2-4) game in Ottawa’s 4-3 overtime win over the Vancouver Canucks on December 7th.  The eight points in seven games almost doubles Zibanejad’s total for the season (9-8-17).  He is 2-1-3 in seven career games against the Caps.

Kyle Turris and Bobby Ryan are right behind Zibanejad in scoring, both with seven points.  Each has done in an unexpected way.  Turris, who is tied for the team lead in assists, has three goals to contribute to his seven points, giving him seven goals on the season.  Ryan, who has four 30-goal seasons on his resume, has five assists among his seven points in the last seven games.  Together they comprise two of the three 20-point players on the Ottawa roster. 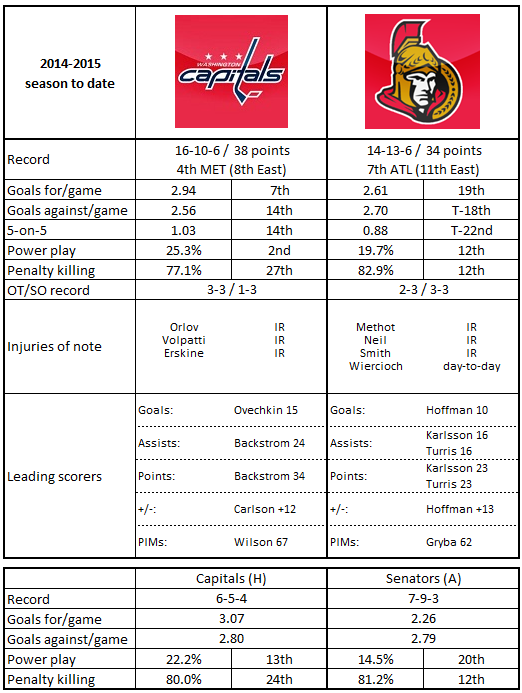 1.  Ottawa has been difficult to score against in the first periods of games this season.  With 21 goals allowed, only two teams – Nashville (20) and St. Louis (19) – have allowed fewer.

2.  It is probably a good thing that the Senators are as difficult to score on in the first period as they are.  Ottawa has the worst record in the league when scoring first (7-7-5) and are tied for the third worst winning percentage when leading after the first period (.444/4-3-2).

3.  The Caps have had trouble getting power play opportunities on the road.  Not so the Senators.  Ottawa has had the third highest number of man advantages on the road this season (62), behind only Chicago (66) and Anaheim (70).

4.  On the other hand, Ottawa has endured the second highest number of shorthanded situations on the road this season (69), behind only the New Jersey Devils (84).

5.  Either the folks in Ottawa are tough scorers, or the Senators are an ornery road team.  Only Anaheim has been credited with more hits on the road (518) than the Senators (512).

4.  The Caps have four ten-goal scorers on the roster – Alex Ovechkin (15), Nicklas Backstrom (10), Joel Ward (10), and Troy Brouwer (10).  They are one of four teams tied for the league lead in ten-goal scorers (Anaheim, Pittsburgh, and Tampa Bay).

Craig Anderson, the Senators’ nominal number one goaltender, has some pretty good overall numbers so far this season, a 2.43 goals against average and a .930 save percentage.  He did, however, stumble over a ten-game stretch over the 30 days from November 11th through December 11th (2-6-2, 3.28, .904).  He seems to be righting himself, winning his last two decisions over New Jersey and Anaheim, allowing only two goals on 68 shots and shutting out the Devils.  Robin Lehner got the most recent start for the Senators, a 4-1 loss to Montreal, so Anderson would appear to be the go-to guy here.  He is 11-5-1, 2.29, .928 with two shutouts against Washington in his career.

With the way he started the season, one might have thought Marcus Johansson would be among those ten-goal scorers for the Caps.  As it is, though, he has nine, none in his last ten games and only one in his last 17 contests after potting eight in his first 15 games.  His shooting, the frequency of which has been an issue in his career, has once more dried up.  In those first 15 games he recorded 37 shots on goal and was held without a shot on goal only twice.  In his last 17 games he has 24 shots on goal and has been held without one eight times.  Getting the second line going means, in large part, getting Johansson going, or at least more closely resembling the player of the first 15 games.  He is 2-2-4, minus-2 in 13 career games against Ottawa.

This will be the first of a back-to-back set of games for the Caps to start the week (they face the Rangers in New York tomorrow night).  In five previous back-to-backs this season the Caps have won the opening game three times and have, in fact, alternated wins and losses in those first games.  Their most recent opening game in a back-to-back was a win, a 5-2 win over the New York Islanders on November 28th.  Given the pattern, that does not bode well for the Caps in this game, but when on a streak, bet the streak.

Posted by The Peerless at 7:36 AM No comments: