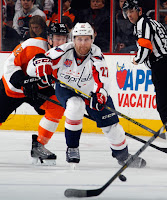 “Everything yields to diligence.”
-- Antiphanes

Over the last six seasons, five NHL players have appeared in every regular season on their respective schedules.  Only two of those players did it with one team.  There is Patrick Marleau with the San Jose Sharks, and there is Karl Alzner with the Washington Capitals.  At the age of 28, Alzner is now tenth on the all-time Capitals franchise list in games played by a defenseman (509).  He is seventh on the franchise list of postseason games played.

The durability has served Alzner well in his career in Washington, but “durable” is not a synonym for “indestructible.”   It came apart for Alzner and the Caps at the worst possible moment last spring in the second round of the playoffs against the Pittsburgh Penguins.  Early in Game 6, with the Caps needing a win to force a seventh game in Washington, Alzner aggravated a groin injury he originally suffered in the first round series against the Philadelphia Flyers.  He played sparingly in the rest of the first period and took only two shifts in the second period before sitting out the rest of the contest, one that the Caps lost, 4-3, in overtime.  The game-winning goal came with Alzner’s partner, Matt Niskanen, on the ice, but it was Taylor Chorney filling in at the other side of the defensive pair on the series-clinching goal.  Alzner played only 5:16 in the loss.  It was the second lowest amount of ice time for a Capital defenseman in a game in the post-2004-2005 lockout era (Jeff Schultz skated 2:23 in a 6-3 Game 3 loss to the Philadelphia Flyers in 2008).

Alzner had sports hernia surgery in June to repair the “pelvic floor,” and he was able to answer the call for training camp.  It is a welcome sign, not because Alzner is going to put up big offensive numbers.  He has never posted more than five goals in a season, and last season he tied his career best of 21 points.   He has 16 career goals with the Caps.  Eight defensemen in team history have had that many or more in a single season (20 occurrences among them).

Alzner has developed, within the arbitrary rules of crediting certain statistics, a grittier element to his game.  Over the last three seasons his hits increased from 73 to 120 to 135 (all in 82 games), and his blocked shots rose from 158 to 165 to 207.  The 207 blocked shots in 82 games allowed Alzner to finish tenth in the league in blocked shots per game.  He also set a personal best in ice time per game last season, finishing with an average of 21:23 per game.  There is also an unsung part of his offensive game that merits mention.  He is one of four Capitals defensemen over the last two seasons with a shooting percentage of at least 6.0 percent (6.1) and one of only two (John Carlson: 6.3 percent) having played in both seasons (minimum: 50 games total).

Yeah well, be careful what you wish for as far as that grittership thing goes, cuz.  In games last year in which Alzner had four or more hits, the Caps were 5-2-3.  And it didn’t even matter in the postseason.  When he had two or more hits, the Caps were 3-3, and when he didn’t have multiple hit games, they were 3-3.  Of course, if he (or other Caps) are doing the hitting, the other team has the puck, so there is that.  The weird thing in the postseason, though, was how the shot blocking thing let him and the team down.  Maybe it was circumstance, but in game in which he had multiple blocked shots, the Caps were 5-1.  When he didn’t, the Caps were 1-5.

The Big Question… Will the physical issues Alzner had last season carry over into this season?

In addition to the groin injury that ended his season in the Caps’ last game, Alzner dealt with a number of other injuries last season – broken thumb, strained oblique, hip flexor.  None of these would typically be thought of as mere nuisance injuries.  His ability to grip a stick and to skate would be expected to be significantly impacted.  After surgery and a summer of recuperation, the question will be if Alzner will hit the ground running (or the ice skating) to start the 2015-2016 season, and to the extent he is not quite 100 percent, how long will he be playing catch-up?  Caps fans might be concerned more that Alzner is 100 percent for the postseason, but one does not want to see him in “catch-up” mode all season, either.

This is the dreaded (if you are a Caps fan) “walk year” for Karl Alzner.  His four-year/$11.2 million deal expires at the end of this season, and he will be an unrestricted free agent at the end of it.  The neighborhood he currently inhabits among defensemen of similar age (Alzner is 28) includes the likes of Carl Gunnarsson, Adam McQuaid, and Brendan Smith (all within two years of Alzner’s age and within $200,000 of his AAV).  One would have to think that if he has a year this season similar to the last two, that Alzner will be in for a substantial increase in compensation.  It would not be to the heights of those thought of more as offensive defensemen, since high-end compensation tends to skew to players with greater offensive skills than Alzner, but it would not be unreasonable to think his next contract would top $4 million in AAV (remember, John Carlson’s contract with a $3.967 million AAV took effect in 2012-2013, and his is up after the 2017-2018 season).  It its way, Alzner’s situation – one arrived at by diligence and dependability – is just one more indicator that this is a big season for the Washington Capitals.

Posted by The Peerless at 9:15 AM No comments: