The Peerless Prognosticator is ON THE AIR!!! -- Game 5: Capitals at Predators, October 10th

The Washington Capitals head back on the road on Thursday with a visit to Nashville to face the Predators.  The Capitals have hardly whistled a happy tune in Music City over the years.  Washington goes into this game on a three-game losing streak in Nashville over which they were outscored, 18-7.

Nashville will be bringing to a close a season opening four game home stand with this game.  The Preds opened the season with a 5-2 win over the Minnesota Wild, lost to the Detroit Red Wings, 5-3, and beat the San Jose Sharks, 5-2, on Tuesday night.  Although the record through three games is the same as last season’s (2-1-0), Nashville has displayed more offense (13 goals) than they did in their first three contests last season (seven goals and suffering a shutout at the hands of the Calgary Flames).

Last season was a bit of a disappointment in the offensive end of the ice for the Predators, if only because their big guns lost significant chunks of the season.  Viktor Arvidsson led the team with 34 goals despite dressing for only 58 games.  He missed 21 games to a broken thumb and three more to a lower body injury.   Even with the absences, Arvidsson set a career high for goals, topping the 31 he recorded for Nashville in 2016-2017.  Being efficient helped.  His 17.4 percent shooting was a career high and was 18th among 370 skaters recording at least 100 shots last season; and, his 25 goals in the 2019 portion of last season was second in the league only to Leon Draisaitl of the Edmonton Oilers (29).  Those 34 goals also made him only the second player in franchise history to record multiple 30-goal seasons; he is one of only seven players in Predators history to do it at least once.  Arvidsson is 6-3-9, plus-4, in nine career games against the Caps.

Shea Weber, who played for 11 seasons in Nashville before he was traded to the Montreal Canadiens in June 2016, holds just about every individual record for defensemen for the Predators.  Roman Josi is second on most of those lists: goals (95 to Weber’s 166), assists (256 to Weber’s 277), points (351 to Weber’s 443), even strength goals (63 to Weber’s 81), total minutes (13,974 to Weber’s 18,332).  His ability to climb the franchise rankings has been due in no small part to his consistency.  He is one of only four defensemen in the league to record at least ten goals in each of the last six seasons (Oliver Ekman-Larsson, Mark Giordano, and Victor Hedman are the others) and one of only three to record ten goals and at least 25 assists in each of the last six seasons (Giordano and Hedman being the others).  One can drill down into that consistency a bit further.  His shooting percentage in each of the last five seasons was 5.5 percent.  Josi is 5-6-11, plus-3, in 13 career games against Washington. 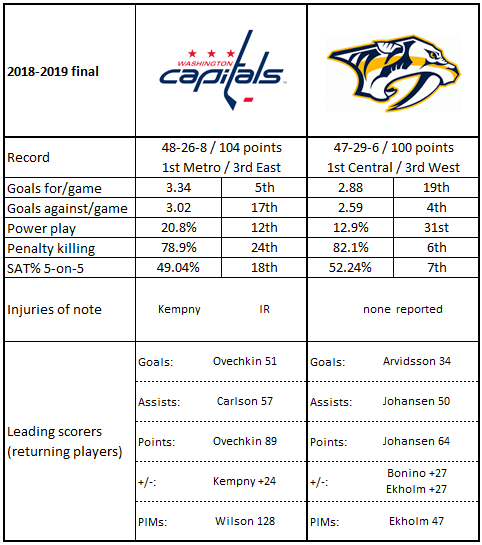 1.  Roman Josi and the departed P.K. Subban (now of the New Jersey Devils) have identical career numbers for Nashville in the following: goals per game (0.17), assists per game (0.45), and points per game (0.62).  Both are best among defensemen in those categories who played at least 50 games for the Predators.

2.  Nashville has never seemed to have much in the way of a power play.  Since the franchise came into the league in the 1998-1999 season, their power play ranks 27th (16.4 percent) of 30 teams, not including the recent expansion Vegas Golden Knights.

3.  Not much of a surprise that Matt Duchene, acquired over the summer, leads the Preds in scoring so far with six points in three games.  However, he is still waiting on his first goal as a Predator; all of his points came by way of assists.

1.  The Caps are 5-8-1, with one tie, in 15 visits to Nashville, and only three of the wins came in regulation.  Washington is 1-5-1 in their last seven visits to Bridgestone Arena.

2.  Another from the “it’s early” file… the Caps lead the league in shot attempts-for percentage at 5-on-5 through Tuesday (58.56 percent).

3.  Every Caps defenseman who has dressed for all four games so far has at least one point, five in all: John Carlson (1-4-5), Radko Gudas (0-2-2), Dmitry Orlov (1-0-1), Jonas Siegenthaler (0-1-1), and Nick Jensen (0-1-1).  Carlson is tied for the league lead in points among defensemen through Tuesday with Morgan Rielly, Dougie Hamilton, and Rasmus Dahlin.

4.  Through Tuesday, only San Jose and Toronto had more power play chances (17 apiece) than the Caps (16).

If there is one name that burns like salt in an open wound with Caps fans, it would be “Filip Forsberg.”  Even now, more than seven years after he was drafted by the Caps, more than six years after he was traded to the Predators for Martin Erat and Michael Latta, you can almost feel the spasms of Caps fans when Forsberg’s name is mentioned.

You would think by now that the memories would have faded.  Forsberg will play his 399th NHL game, all with the Predators, when he takes the ice on Thursday night. He is already fourth in team history in career goals (148), tenth in assists (161), fifth in points (309), second in game-winning goals (28), fifth in power play goals (38, tied with Craig Smith), and sixth in shorthanded goals (six, tied with Tom Fitzgerald).  He is another player whose production last season, while impressive, was cut short by absences.  Forsberg had 28 goals in just 64 games last season, missing 17 games in mid-season to an upper body injury and another game in March to the same reason.

Those missed games almost certainly cost him a 30-goal season which would have made him the first player in Nashville history to record three seasons of 30 or more goals (he had 33 in 2015-2016 and 31 in 2016-2017). In fact, his missing 15 games in 2017-2018, when he finished with 26 goals, might have kept him from being a four-time 30-goal player.  As it is, Forsberg is one of ten players in the league to record more than 25 goals in each of the last five seasons, and he has the most career seasons in Nashville with more than 25 goals scored (five).  He is off to a fast start this season with three goals in three games, and he is second to Matt Duchene in points (3-1-4).  Forsberg is 6-5-11, in nine career games against Washington.

Based on his history, one would not think Nashville will be the place to break out of the early-season slump.  Ovechkin has four goals in ten visits to Nashville and has only four points in his last seven visits there.  Two of his goals were of the power play variety, scored in consecutive visits in 2015 and 2016.

Ovechkin, whose goal against St. Louis brought his career total to 500 games having scored at least one goal (13th all-time in goal-games), has been scoring goals in fits and starts dating back to last season.  He has six goals in his last 19 regular season games dating back to last March (on 91 shots; 6.6 percent), but he had two two-goal games in that mix.  Ovechkin is 10-5-15, minus-9, in 19 career games against Nashville.

Based on history, this might be the most difficult week of the season for the Caps.  They haven’t had much success against the Dallas Stars, and they already lost in overtime the first of two games they will play against the Stars this week.  They go to Nashville on Thursday, where their last three visits ended in shellackings – 5-2 in 2017, 6-3 in 2018, and 7-2 last season.  It might be Music City, but for the Caps in recent years (one regulation win in more than a decade), the soundtrack has been the best blues mix the town can scare up.  Time to turn that around.