“Nothing ever becomes real till it is experienced.”
-- John Keats

Chandler Stephenson took each rung of the developmental ladder in its turn.  Drafted by the Washington Capitals in the third round in 2012 (one spot ahead of Philadelphia Flyer defenseman Shayne Gostisbehere, it should be noted), Stephenson spent another season with the Regina Pats in the Western Hockey League before getting a taste of professional action with the Hershey Bears late in the 2012-2013 season.  That was followed up by three more seasons with the Bears with a couple of brief stints with the Caps in 2015-2016 (nine games) and in 2016-2017 (four games).

With the Caps having lost a number of forwards after the 2016-2017 season, there was room for advancement on the 2017-2018 roster, but there would be competition for bottom-six spots, even with the departure of Daniel Winnik after last season.  Stephenson was one name in the mix, competing with off-season acquisitions Devante Smith-Pelly, Alex Chiasson, and Tyler Graovac; and prospects Travis Boyd, Nathan Walker, and Liam O’Brien.

Smith-Pelly, Graovac, and Chiasson were among the forwards starting on Opening Night.  Stephenson sat, and he would sit for the first nine games of the 2017-2018 season.  It seemed as if his season would be a combination of nacho duty, occasional games in the Caps’ lineup, and perhaps another year with work put in with the Bears in Hershey.  He was given a sweater in the Caps’ 10th game of the season, in Vancouver against the Canucks.  The Caps lost decisively that evening, 6-2, but Stephenson scored a goal late in the contest, his first as a Capital.  He would prove difficult, if not impossible to dislodge from the lineup thereafter.  He dressed for 67 of the Caps’ last 73 games of the season and posted very respectable numbers for a rookie playing a bottom six role (6-12-18).  His plus-13 for the season tied for fifth among all rookies.

Stephenson’s ten-game segments were consistent, if not eye-popping.  He had points in each of the eight segments, assists in seven of them, and he was a “plus” player in six of them.  And, as happens often with bottom six/secondary scorers, when he did contribute offensively, it was part of a successful team effort.  Washington was 11-5-0 in the 16 games in which he recorded a point. 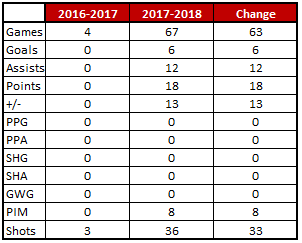 Fearless’ Take… One has the feeling that there is a goal scorer in there somewhere with Stephenson.  Although it has not yet expressed itself in his pro career, he had 30 goals in 69 games in his last year in juniors.  But he did finish seventh among 83 rookies with at least 25 shots on goal in shooting percentage (16.7 percent).  And his presence in the lineup at least coincided with success.  The Caps were 41-21-5 with Stephenson in the lineup, 8-5-2 when he was not.

Cheerless’ Take… Just like secondary scoring is important to wins from time to time, too much ice time among bottom six forwards might be an indicator of something else.  The Caps were 19-11-4 in games in which Stephenson skated 12 or more minutes, 22-10-1 in games in which he skated less than 12 minutes.  And what was up with the shooting?  Washington was 8-1-0 in games in which he had two shots (he had none with as many as three).

Odd Stephenson Fact… Chandler Stephenson was the only player in the league to appear in more than 60 games (67) and record fewer than 40 shots on goal (36).

The Caps were in mid-season doldrums when the Flyers came to Washington to end the January schedule.  After winning the first three games of the new calendar year, the Caps were 2-2-2 in their next six games, one of them a 2-1 overtime loss to the Flyers at Capital One Arena ten days before this game on the same ice sheet.

The Flyers put the Caps in an early hole, Nolan Patrick scoring the game’s first goal just 78 seconds into the game and extending the lead with a goal by Travis Konecny at the 7:50 mark.  The Caps erased the deficit early in the second period, courtesy of Chandler Stephenson.  In the third minute, John Carlson tried to hit Stephenson with a long pass from his own end to the Flyer blue line, but the puck was too wide of Stephenson and rimmed around the board to the opposite corner.  Lars Eller got to the puck first to wipe out an icing call and from the Olympia Corner sent a puck to the front of the net.  Goalie Michal Neuvirth stopped it, but he lost sight of it at his skates.  Stephenson darted in and poked it though his pads to halve the deficit at the 2:14 mark.  Less than a minute later, Madison Bowey found Stephenson on a long lead pass for a breakaway, and Stephenson did the rest, taking the puck just outside the Flyer blue line, skating in on Neuvirth, and slipping the puck on a backhand between his pads to tie the game at the 3:01 mark.  The Caps went on to score three more goals before the Flyers added one at the end in a 5-3 Caps win.  It was Stephenson’s first (and, to date, only) multi-goal game with the Caps.

When you see “7-11,” you normally associate it with a convenience store and Slurpees.  On February 22nd, “7:11” was Chandler Stephenson’s ice time.  He skated only 11 shifts (only two of them in the second period), managing one shot attempt (a shot on goal) and one faceoff (lost).  Of that 7:11 in ice time, 1:56 of it was skated on the penalty kill.  Stephenson was doing just that when he was a step late covering Vincent Trocheck in the high slot when the latter redirected a Jonathan Huberdeau drive past goalie Braden Holtby with 18.7 seconds left for the game-winning goal in a 3-2 Caps loss.

Postseason… In Chandler Stephenson’s first taste of postseason action in the NHL, he appeared in all 24 games for the Caps and contributed a pair of goals and five assists.  His seven points tied for the third most (with Evgeny Kuznetsov) by a Caps rookie in the postseason, topped only by Jakub Vrana in this same postseason (eight) and Richard Zednik (ten points in 1998).  When he scored a shorthanded goal in the Caps’ 6-3 win over the Columbus Blue Jackets in the series-clinching Game 6 win, he because the first Caps rookie to score a shorthanded goal in the postseason.  If there was an oddity in his postseason it was that his first and last games of the playoffs were the only ones in which he skated less than ten minutes (9:44 in Game 1, 9:52 in Game 24).  Another odd occurrence was his only once recoding points in the 13 games in which he skated more than 15 minutes, recording a pair of assists in the Caps’ 4-3 overtime win against Columbus in Game 5 of their opening round series, a game in which Stephenson skated 20:38, his high in the playoffs.

Chandler Stephenson made the most of his opportunities as a rookie on a largely veteran team.  And when it came to the postseason, he added a spark and speed that the Caps have lacked among their bottom six forwards in years past.  He established himself as a likely bottom-six fixture for years to come, especially with the departure of Jay Beagle to the Vancouver Canucks in free agency.  It was all something that might not have been on anyone’s radar when the team convened for training camp last September, but like John Keats said, “Nothing ever becomes real till it is experienced.”