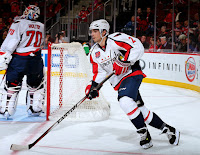 The Matt Niskanen that signed a seven-year/$40.25 million contract with the Washington Capitals in July 2014 was something of an anomaly in the context of his own career.  In the 2013-2014 season – his “walk” year with the Pittsburgh Penguins – Niskanen scored ten goals, more than the combined total he recorded in his previous three seasons covering 178 games (nine).  He had more points (46) than he had over those same three seasons (45).  He tied a personal best in power play goals (3) and tripled his best season in game-winning goals with six.  It would be a difficult season to match.

He did not, at least in terms of the raw numbers.  Four goals, 31 points, a pair of power play goals, no game winners.  If you were comparing that to last year’s Matt Niskanen, the 2015 version might pale somewhat in that comparison.  It would also be unfair to Niskanen.

The 2013-2014 season was a a bit of a unique instance for Niskanen.  It was a case of an opportunity born out of misfortune.  Kris Letang missed 45 games last season for the Pittsburgh Penguins to a lower body injury, and upper body injury, and then a cardiovascular ailment.  Niskanen played in all of those games, assuming much of the role Letang played.  In those 45 games, Niskanen went 7-19-26, plus-15, with three power play goals and a 120 shots on goal.  On an 82-game basis that would work out to a 13-35-47, plus-27 season.

As it was, Niskanen was actually 10-36-46, plus-33, last season.  The difference was essentially the power play production (all three power play goals he scored came with Letang out of the lineup).  It was not going to be a role he would reprise for the Caps in his first season, either in replacing a top defenseman lost to illness or injury, or in getting top power play minutes over a long stretch of games.

Niskanen’s ten-game segments display a certain consistency about them as well on one level, but an odd change over time on another level.  He was generally in the 3-4 point range per segment, and he recorded special teams points in six of the eight segments (including a shorthanded assist in the fourth segment).  His shots on goal were generally in the mid-teens across the segments. 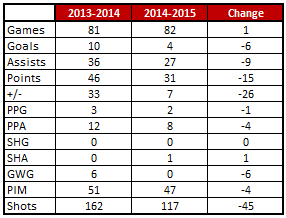 Fearless’ Take: Niskanen is an all-situations defenseman.  He was the only Capitals defensemen to average at least 19 minutes of even strength ice time per game and at least a minute a night on both the power play and penalty kill.  In fact, he was one of only 18 defensemen in the league with that ice time profile.  His 22:21 in average ice time was a career best for him.

Cheerless’ Take:  Look over at the columns in the far right of that summary table at the top of the page.  His Corsi plus-minus (all situations) was a net plus-68 over his first 50 games, but in his last 32 games it was a minus-91.  The scoring chance plus-minus follows a similar pattern, plus-74 in his first 50 games, minus-54 in his last 32 games.  Oddly enough, his goal differential (all situations) in those last 32 games was a plus-4 (all numbers from war-on-ice.com).  Why?  Perhaps it was those four power play assists (doubling his output over his first 70 games) that contributed to the result.  But that sure was an odd end of the season.

Odd Niskanen Fact:  That Corsi plus-minus in all situations of minus-23 can be explained in its entirety (and then some) by his performance against New York teams.  Niskanen was minus-27 against the Ranger and Islanders, plus-4 against the rest of the league.  Making that fact a bit stranger is that he was 1-5-6, even, against those two teams in eight games.

Game to Remember: November 28th versus the New York Islanders.  Matt Niskanen’s start with his new team was a lurching on, at least in the offensive end.  In his first 19 games with the Capitals he did not record a goal and had only five assists, those coming in three games.  He was having particular trouble scoring at home.  In ten home contests over those first 19 games, Niskanen was 0-2-2, plus-2.  He got his first goal as a Cap in his 17th game (and his first home ice goal) in a 2-1 loss to the Buffalo Sabres on November 22nd.  Then came a home-and-home set with the Islanders.  Niskanen recorded an assist in the first of those two games, the first time he recorded points in consecutive games with the Caps, although the Caps lost again, 3-2, in overtime.

In the back half of the home-and-home at Verizon Center, Niskanen recorded his high for points in the 2014-2015 season.  He assisted on the Caps’ first two goals, a primary assist on a power play goal by Andre Burakovsky and another primary assist on a goal by Marcus Johansson late in the first period of that contest.  The Caps gave away the lead, allowing two goals in the space of 35 seconds in the last 1:02 of the first period of that game, but they took the lead in the second period on a goal from Alex Ovechkin, then added a goal from Evgeny Kuznetsov in the third.  Niskanen took a hit to make a play late in the contest, taking one from Brock Nelson just as he was about to send the puck around the back wall in his own end.  It started a play that was finished by a Joel Ward empty net goal, and Niskanen had his third assist of the game, the first time he did so since February 2009 with the Dallas Stars.

Game to Forget: November 1st versus Tampa Bay.  It started in the game’s seventh minute when Matt Niskanen got caught in a no-man’s land above the hash marks trying to defend Bryan Boyle.  He tried to poke the puck off Boyle’s stick, but it was late and Boyle’s shot was redirected by Ryan Callahan to give the Lightning a 1-0 lead.  The Caps took the lead on goals by Marcus Johansson and Eric Fehr, but in the tenth minute of the second period, the Lightning scored again.  This time Niskanen got caught at the front of the net peering at Nikita Kucherov with the puck behind the Caps’ net.  Niskanen did not see Ondrej Palat pinching in and was no position to defend the one-timer from Palat off a pass from Kucherov.  Niskanen could not be faulted on the Lightning’s third goal, a redirect from Kucherov, but he did get a good look at it from the opposite side of the crease from where Kucherov was camped.  Washington tied the game in the last minute of the second period on a power play goal from Troy Brouwer, but the Caps lost on a third period goal by Jason Garrison.  Niskanen was not on ice for that goal in the 4-3 loss, but the three goals he was on ice for contributed to his worst plus-minus (minus-3) of the season.

Niskanen’s postseason mirrored a lot of Caps defensemen.  The offensive contributions of the regular season were not as evident in the playoffs, especially against the Rangers in the second round (one assist in seven games).  He did lead Washington’s defensemen in takeaways in the postseason with nine.  Trouble was, he also led the blue line in giveaways with 24.

The reasonable evaluation of Niskanen’s year would be that he delivered what would reasonably be expected of him.  Accounting for the year he had in Pittsburgh last season under somewhat unique circumstances, his performance numbers were a bit better than his career numbers would have suggested.  Even with the somewhat bizarre Corsi and scoring chance numbers late in the season, Niskanen was a steady, durable, reliable performer.  Sort of like radial tires.  You don’t really think about them much, but they do their job.

That odd fact does kind of loop around to an odd outcome of Niskanen’s season, though.  He was 1-4-5, plus-1 against the Islanders this season, but he was just 1-2-3, minus-7 in 20 games against other teams in the Eastern Conference that reached the playoffs.

On balance, though, Niskanen provided solid minutes in a second-pair role.  There is no reason to suspect that his contributions going forward would be any less.  In that sense, his new start with a new team in a new city was not so much a continuation of the experience he left behind in Pittsburgh as it was a return to the solid defenseman he has demonstrated himself to be, the sort that can be used in any situation.