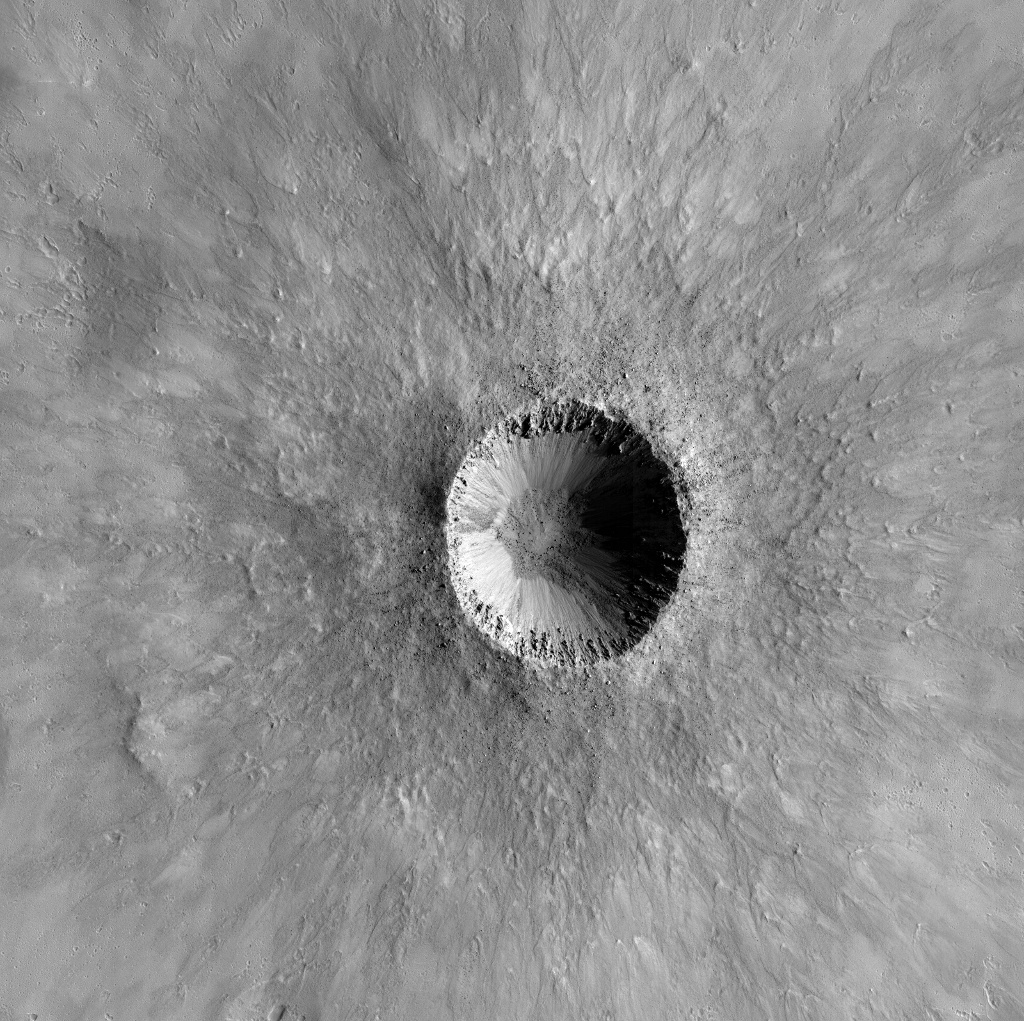 Well, that was a wake-up call.

When the horn blew, and the Washington Capitals skated off the ice, 4-1 losers to the New York Rangers this afternoon, it was just that… a wake-up call.  The loss left the Caps 2-7-1 against Atlantic Division teams this season, 1-7-0 in their last eight contests against that division’s teams.

When coupled with the fact that the Caps are 2-4-0 against Northeast Division teams, you can start to see rather clearly that this is no playoff team.  No amount of wishing, hoping, craving, yearning, or longing is going to change that fact.  At the half-way point of the season, the Caps are pretty much done.  This team is what it is, shallow, slow, uninspired, at most a tease, and that coming when they play Southeast Division teams or occasionally scare up the rare a decent effort against a team outside the woeful Southeast.

It was all laid bare this afternoon against what itself was an underachieving team to date, and one that was starting a backup goalie who had not played since February 23rd and who had a mediocre 1-1-1 record coming into this game.

It was really nice – really – that Steve Oleksy recorded his first NHL goal to open the scoring, but frankly, when that is your highlight for the day, 2:16 into the game?  You are not going to have a good day.  And it wasn’t.  After Oleksy’s goal, the Rangers slowly and methodically chipped away, eventually tying the game mid-way through the first period, then executing the reversal with a pair of goals 1:22 apart in the second period to chase goalie Braden Holtby and pretty much end the competitive portion of the game.

-- Alex Ovechkin is making a habit of coming up small in nationally televised games.  Mike Milbury ripped Ovechkin in the midst of a lackluster effort against the Philadelphia Flyers on February 27th in which Ovechkin failed to register a point, was minus-1, and otherwise looked uninterested.  Today he finished without a point, was on ice for all three even-strength goals for the Rangers, took two penalties on one play (the Rangers scoring on the first delayed call when Boyle shot the puck past him in an iffy attempt to block a shot), was minus-3, and otherwise looked uninterested.

-- The game-winner was scored by a guy who was stuffed so far in Ranger coach John Tortorella’s dog house, the Animal Welfare League might have been tempted to step in.  It was Brian Boyle’s first goal of the season in 20 games.  It was only his second “plus” game of the season.

-- If there was a bright spot, other than Oleksy’s goal, it was Nicklas Backstrom’s improbable 14-for-14 in the faceoff circle.  He was the best player on the ice for the Caps – no goals against scored when he was on ice, three shots on goal (five attempts), two hits, two takeaways, a blocked shot, and all those faceoff wins.

-- Then again…Backstrom took only two draws in the offensive end (winning both, of course), and Mike Ribeiro took only one.  These are the “offensive” centers.  It did not make for much offense, but then again, if you saw the score, you knew that.

-- Joey Crabb had no shots on goal.  That makes five times in his last eight games.  Yes, he is a fourth liner and all, but still, this is a guy who had 11 goals in 67 games last season.

-- Make one wonder how it is that Mathieu Perreault was given the afternoon off.

-- Watching the Capitals chase the Rangers as they were working the wall with the puck was like watching a youngster running around the schoolyard futilely trying to get his lunch back from the taunting schoolyard bully.

-- The Caps have only five more games against Atlantic Division teams.

In the end, it has come down to this.  If the Caps are to make the playoffs this season, they all but have to win both games against Carolina this week in regulation. With eight points separating the two teams in the Southeast, the Caps need four points, and they need Carolina to earn none.  Sure, you might argue that the Caps are only six points behind the New Jersey Devils with a game in hand, and that the Devils have been reeling lately, but there are three teams ahead of the Caps chasing the Devils, too.

The Peerless Prognosticator is ON THE AIR!!! -- Game 24: Rangers at Capitals, March 10th

The term, “brunch” is often credited to an English writer, Guy Beringer, who was inspired by the desire for a remedy for Sunday morning hangovers.  In 1895, he wrote…

"Instead of England's early Sunday dinner, a postchurch ordeal of heavy meats and savory pies, why not a new meal, served around noon, that starts with tea or coffee, marmalade and other breakfast fixtures before moving along to the heavier fare? By eliminating the need to get up early on Sunday, brunch would make life brighter for Saturday-night carousers. It would promote human happiness in other ways as well. Brunch is cheerful, sociable and inciting. It is talk-compelling. It puts you in a good temper, it makes you satisfied with yourself and your fellow beings, it sweeps away the worries and cobwebs of the week."

Well, there are the New York Rangers.

“The New York Rangers,” you say, Peerless?  That’s right, the New York Rangers.  Thought before the season to be a bona fide contender for the Stanley Cup, the Broadway Blueshirts find themselves clinging by a skate lace to a playoff spot, one point ahead of the Winnipeg Jets in eighth place in the Eastern Conference.  And this is who the Caps will face in their 12:30 (Daylight Saving Time...remember, spring forward) start on Sunday.

And it is not as if the Rangers are playing with the sense of urgency that their uncertain playoff future suggests.  Since they defeated the Caps by a 2-1 margin back on February 17th, New York is 4-4-1.  And it is not as if their wins have been impressive in that run.  They were taken to the trick shot round before beating Buffalo, and they were taken to overtime by the Islanders before escaping Long Island with a win.

Defense and goaltending have not been issues with the Rangers lately.  In their 4-4-1 run of late they have allowed only 21 goals (2.33 per game).  On the other hand, the offense has had trouble finding the back of the net, scoring only 20 goals in the same span (2.22 per game).

The problem is secondary scoring for the Rangers.  Oh, Rick Nash (six goals over these nine games) and Ryan Callahan (four) are doing fine.  But the rest of the squad?  Marian Gaborik has one goal.  Carl Hagelin…one.  Brad Richards…one.  And that one came in his last game, against Ottawa, after he was pushed into the side boards head first by Patrick Kaleta in a game against the Buffalo Sabres.

It does not get better, either.  The Rangers have only 14 even strength goals over their last nine games.  It is only from a power play that has struggled most of the year (24th ranked coming into this game) – 6-for-27 over these nine games – that the Rangers haven’t tumbled further in the standings.  They are 5-for-15 (33.3 percent) in their four wins, 1-for-12 (8.3 percent) in their five losses.  Here is how the two teams compare in their overall numbers: 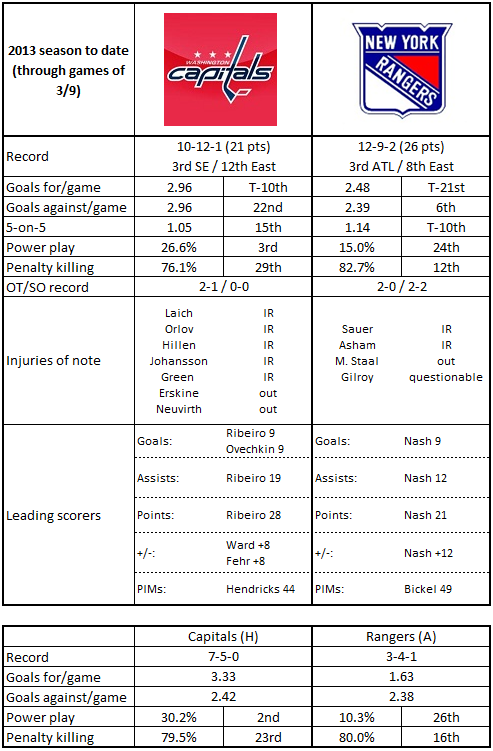 2.  Only four teams in the NHL play to fewer total goals scored per game, for and against, than the Rangers, whose games feature an average of 4.9 total goals per game.

3.  The Rangers have scored only three power play goals on the road this season.  Only one team has scored fewer – Detroit… none, if you can believe that (0-for-36).

5.  If you are going to get the Rangers, chances are you are going to do it in the second period.  The Rangers have the fewest goals scored in the middle period of games this season (13 in 23 games), which leaves them at minus-7 in the period despite a very respectable number of goals allowed (20, tenth fewest).

3.  The Caps are as likely to play one-goals games (11) as they are blow-outs (11 games decided by three or more goals.  All things being equal, all things are almost equal comparing the two alternatives.  The Caps are 5-5-1 in one-goal games, while they are 5-6 in blow-outs.

5.  We’re down to two.  With Toronto losing to Pittsburgh in a trick shot competition on Saturday night, the Caps are one of only two teams yet to try their hand (or sticks) in the Gimmick, Carolina being the other one.

Marian Gaborik started the season with five goals in his first five games, including a hat trick against the Boston Bruins.  Two of his goals were game winners.  It looked as if with Rick Nash he would provide a solid half of a one-two punch that the Rangers would use to improve their offense from last season’s good, if not great, 11th ranked scoring offense.  Well, things have not gone as well since those five games for Gaborik.  He has only three goals in his last 18 games (two of them game-winners), and the Rangers are averaging almost a quarter-goal less per game on offense than last season (2.48 to 2.71).  He has goals against only three different teams this season – three against Boston and the Islanders, and two against Toronto.  The Rangers have not lost a game in regulation in which he scored a goal (4-0-1), but they are only 8-9-1 otherwise.

1.  Stay…out…of…the…box!  One more time.  The Caps are 1-9-1 when allowing the opponent four or more power plays, and their one win came in overtime.

3.  Keep it simple…not stupid.  The Caps are down to six healthy defensemen on the roster, pending any roster moves in the wake of John Erskine’s injury against the Islanders on Saturday.  Two of them played significant time at Hershey this season – Tomas Kundratek (41 games with the Bears) and Steve Oleksy (55 games).  Another is skating after missing the better part of two seasons to injury (Tom Poti), and another is skating after spending large portions of the last two seasons as a healthy scratch.  It is not a deep defensive team, and you can bet the Rangers will try to forecheck them into the National Portrait Gallery across from Verizon Center.  They will have to keep things simple in defending and getting out of their own zone.

In the end, the Caps face a team on Sunday that can make things very difficult for a club that is giving less than 100 percent or that is thin on the blue line in terms of skill moving the puck.  The Caps looked guilty of the former at times on Saturday, and they certainly have issues on the blue line.  There can be no passengers in this game.  The Caps need everyone rowing together and rowing forward.

Posted by The Peerless at 12:12 AM No comments: