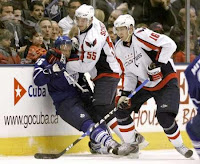 Theme: “When they boo you, you know they mean you.”

George Halas said that in reference to football, but it pretty much applies to any sport or art form. And no one, it seems, is the target of more boos, or at least more ill feeling among Caps fans, than defenseman Jeff Schultz. Frankly, we’re not seeing either the reason or the purpose. First, there is the calendar. If Karl Alzner does not make the opening night roster (or John Carlson), Schultz will start the year as the youngest defenseman on the roster (he will not turn 24 until next February). Then there is performance. Schultz has played two full seasons and about half of another, and he has been either first or second in plus-minus in each. He has, by far, the best cumulative plus-minus among defensemen over the last three seasons (+30 to Mike Green’s +20).

But Schultz is 6’6”, 221 pounds. And big defensemen are supposed to hit – hard and frequently. Well, maybe. Four defensemen of 6’6” stature played in at least half of their team’s games last year – Alexei Semenov, Marek Malik, Chris Pronger, and Schultz. Only one – Semenov – recorded at least one hit per game (1.13 in 47 games). Pronger came in at 0.95 in 82 games, Schultz at 0.83 in 64 games, and Malik at 0.33 in 42 games. It’s not a large sample, but then again, large defensemen heeding Fred Shero’s philosophy of taking the shortest route to the puck carrier and arriving in ill humor is not a universal truth among big defenders, either.

And here is another odd fact about Schultz. Last season, of the 11 defensemen in the NHL standing 6’6” or taller, only Zdeno Chara and Pronger played in more games, hinting at a certain durability in Schultz’ game (of lack of it in others of his stature). In 2007-2008, only two of 11 (Chara and Hal Gill) played in more than the 72 games Schultz played.

We’re not here to sing Schultz’ praises, inasmuch as he’s a young defenseman (174 career regular season games) who has a considerable way to go in his development, as much as we scratch our head over the antipathy shown to him by Caps fans. Is he – or will he ever be – a top-pair defenseman? Probably not. John Carlson and Karl Alzner would appear to have more promise as a partner for Mike Green down the road. But Schultz can – even as his body fills out some more – be a solid second-pair defenseman.

Fearless: OK, let’s play a game…two defensemen, both in their third year in the league:

Even Cheerless can figure out that Defenseman 2 is Schultz. But Defenseman 1?... That would be the 1986-1987 line for third year defenseman Sylvain Cote, who ended up playing in almost 1,200 games over 19 seasons. This isn’t to say Schultz will have as long, or even as prolific a career as Cote – a solid player for almost two decades. But it isn’t out of the realm of possibility that there is an upside to Schultz that hasn’t manifested itself (and might not for a few years – for example, Cote wouldn’t become a 40-point defenseman until his eighth season, his first with the Caps). And Schultz should not be penalized in the comparison just because he’s Pronger-sized and not Cote-sized.

Cheerless: In two years’ worth of playoffs, the Caps have played in 21 games. Schultz has been around for three of them. He missed most of the Flyers’ series in 2008 with a back injury and almost all of the 2009 playoff season with a rib injury. In the last 23 games of the regular season last year, he was 0-2-2, -5 after starting the year 1-9-10, +18 in his first 41 games. You can’t predict injuries, and incurring them isn’t a player’s fault, but you’d like to see stronger finishes than what he’s had so far.

Following on to an observation we made about Karl Alzner, nine defensemen were selected in the first round of the 2004 draft. Of that group, three – Mike Green, Ladislav Smid, and Andrej Meszaros – have played in more games. Two – Andy Rogers and A.J. Thelen (one of the great busts in recent memory) – have yet to play in an NHL game. One might conclude that while Alzner has rocketed to the NHL (OK, we concluded that), Schultz’ development has been entirely reasonable within the context of his class. Of those playing more games so far in their respective careers, Smid (9th) and Mesazros (23rd) were selected above Schultz in the 2004 draft, Green (29th) two picks after Schultz.

Last year, Schultz had an impressive plus-minus, but had the worst Corsi rating among Caps defensemen playing in at least 30 games (5-on-5, according to behindthenet.ca). He also had the third worst mark among Caps defensemen playing in at least 30 games at 5-on-5 goals against/60 minutes. But he played a higher quality of competition than did Shaone Morrisonn, Milan Jurcina, or John Erskine (all of who had better 5-on-5 goals against/60 minutes (all numbers from behindthenet.ca). The point of all this is that Schultz is very much a work in progress, even if there is a vocal crowd of Caps fans imploring him to hit something… anything. 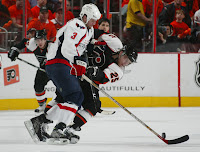 Five times in Tom Poti’s ten year career, he has recorded at least ten power play points. In two seasons with the Caps, he has a total of ten points, none of them goals. It’s hard to argue with the success of a team that compiled the second highest power play conversion rate since before the clutch-and-grab era and that set a club record for conversion rate (25.2 percent). But what was the composition of that power play? Among defensemen playing at least 30 games, Mike Green logged almost four times as much time (5:22) a night on the power play as the next defenseman – Poti (1:26). Would the Caps benefit by spreading that time more evenly among those two defensemen? If looking toward the spring is one’s focus, it seems a fair question.

The irony of this is that a defenseman who spent a good portion of his career with a mixed reputation for being primarily an offensive defenseman with some issues in his own end has become the elder statesman of this Capitals defensive squad and more of a two-way player. Despite an unfortunate episode with his stick in Game 5 of the second round playoff series, Poti was the Caps’ best defenseman in the post season last year and had the best post season of his career.

For Poti, then, there are more question marks than one might expect to see in a defenseman who is perhaps still in his prime years. Can he stay healthy? Can he deal with the Verizon Center ice? Will he get more time on the power play? Was his playoff production a harbinger of what he could contribute this year, or is his offensive production in decline? Is he really morphing into a two-way defenseman, or is that merely his role on this team as Mike Green logs the big power play minutes and bears the offensive load?

Fearless: Look at the last four years of Poti’s career. Playing with the Rangers, Islanders, and two years with the Caps he played on decent teams – all of them playoff teams – and was a combined plus-27. Yeah, yeah, we know. Plus-minus is the worst statistic since the invention of the base-10 numeral system. But it hints at a maturity in Poti’s game (note: there is a chicken/egg thing here… for four years he had good offensive numbers, but bad plus-minus on lesser teams; then for four years he had uneven offensive numbers, but good plus-minus numbers on better teams Were the numbers better because of the better teams around him, or better because he got better, or more to the point, more responsible?). He has two years remaining on his contract with the Caps, and he could provide a welcome sense of stability and adequate production as the younger guys like Karl Alzner and John Carlson work their way into the lineup.

Cheerless: He had some good years in Edmonton, some difficult ones – defense-wise – in New York, and has had health problems in DC. Is it the ice? That Edmonton sheet is pretty nice, to hear players tell it. What they say about the Garden and Verizon Center isn’t really the sort of thing you see in family publications. Poti, as recently as last February, described the ice as “disgusting” and an “embarrassment.” Then he really warmed up... "It's why so many guys are hurt with groins… I can't even imagine a guy like Alex Ovechkin on a decent sheet of ice, how many goals he'd get, and a guy like Mike Green as well. You look at the puck, and it's just bouncing and rolling and flipping all over the place." In three years, Poti has gone from 78 games played (on Long Island) to 71 to 52 last year.

Tom Poti takes the ice this year as the oldest (32) and most experienced (717 regular season games) defenseman on the parent roster. But there is experience, and there is experience. Poti has been to the playoffs seven times, and his teams have one series win to show for it (last year’s seven game opening round win over the Rangers). It’s sort of the Caps’ problem in a nutshell – not enough playoff success on the resume. But Poti’s game seems to have rounded out in his two years with the Caps. He is not – and won’t be this year – the guy called upon to put up big numbers from the blue line. He would not seem likely to be called upon to be the shutdown defenseman on this team (one way to look at this – Poti was on the ice for the last shift in three of the Caps’ seven playoff wins last spring), although just who that shutdown defenseman is remains something of a mystery.

Poti has had issues with the home ice surface. Those issues have been expressed in word and – if there is a causal relationship – in missed games. Last we looked, there is still an arena on 7th Street in which the Caps will play this year. Whether the ice surface is better, or at least to Poti’s liking (or that of his teammates), well… the proof is in the pudding (which is what the Caps might be skating on). Poti should be as productive as he has been the last two years in the games he plays, assuming a more balanced role…