Theme: “It's the niceties that make the difference; fate gives us the hand, and we play the cards."
-- Arthur Schopenhauer

That would be a pretty good record for an NHL team, 100 points in 73 games. It happens to be the Washington Capitals’ record in games played by Tyler Sloan over the past two seasons. In 2010-2011, that record was 21-10-2. But if you were to canvas the Caps Fan on the Street, you might think that Tyler Sloan gets up in the morning, pours his Wheaties down the drain, pours his milk in the trash can, and then has to scour around his house to find the manual on how to tie his shoes.

Ah, but fate has been somewhat kind to young Mr. Sloan. He plays for the Washington Capitals, a formidable (well, in the regular season) hockey team that can absorb the occasional foible of a defenseman who skates on the fine line between getting an NHL sweater and riding an AHL bus. So let’s get this out of the way upfront. If you look at Sloan’s ten-game splits (all of which are incomplete I that he had no “10-game” split), there isn’t much there… 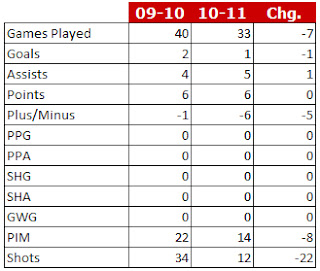 Delving a bit deeper into Sloan’s numbers, he had the worst differential of goals for/60 minutes at 5-on-5 to goals against/60 minutes at 5-on-5 for any Capitals defenseman who played more than 20 games with the team (-1.04).* The flip side of that is that he had the “worst” differential in these measures when he was off the ice (+0.77). You could look at those two numbers and think, “hmm, good things happen when he’s off the ice, not so much when he’s on.”

But here is a stunner. Among ALL defensemen in the NHL playing more than 20 games (and there were 237 of them), Sloan had the second worst Corsi/Rel number (-18.8). Of 672 skaters playing in at least 20 games, only 15 had a worse number. Not to place too much emphasis on one number, but Corsi being a product of shots directed toward the net, Sloan was on the ice for an inordinate number of shots directed at his own net (versus those directed by the Caps to the opponents’ net) when he was on the ice as opposed to when he was off the ice – a rather damning statistic for a defenseman.

The folks at behindthenet.ca (who can never be praised enough for the data they have put together) have a curious set of measures – zone finishes in the offensive, defensive, and neutral zones. And from those numbers one can compare offensive zone starts to finishes. In other words, in the context of the teammates around him, doe a player “finish what he starts?” Looking at offensive starts and zone finishes, John Carlson and Karl Alzner had the best marks on the team in terms of their ratio of offensive zone finishes to offensive zone starts. Tyler Sloan was not far behind (third among eight defensemen who played in at least 20 games for the Caps). But given that, and the other numbers he recorded, it just seems to lay a firmer foundation that Sloan struggled in his own end.
Odd Sloan Fact… Despite finishing the year a minus-6 in 33 games, Sloan had only two “minus” games in his last 14 contests.

Game to Remember… November 14, 2010. Sloan recorded his only multi-point game of the 2010-2011 season, a two-assist effort, in a 6-4 win over the Atlanta Thrashers at Verizon Center. He had three hits and two blocked shots as well. And, he was not on the ice for any of the Thrashers’ goals. An odd footnote to that game. Sloan was credited with an assist (his second) on the Caps’ third goal of the game, scored by Alexander Semin. However, he was not credited with having been on the ice when the goal was scored, his having gone off on a change two seconds before the goal was scored.

Game to Forget… November 19, 2010. Five days later, Sloan faced the Thrashers once more. He was on the ice for the first four goals scored by Atlanta in a 5-0 payback game, while playing only 12:47. Not all of them could be laid at the skates of Sloan (although getting your pocket picked by Dustin Byfuglien and watching him skate in to score the fourth goal was rough), but the minus-4 was his worst as a Cap.

In the end, whether Sloan has been in the lineup (a .685 points earned percentage when he is over the last two seasons) or has not (a .703 points earned percentage), it hardly seems to matter a great deal in terms of outcome. If he is looked upon as a defenseman who can provide competent relief for an injured player for a short span of games, his shortcomings can be tolerated. The flip side of that, however, is that he has played in 73 games over the past two seasons. That impresses us as either: a) more than simply a “relief” defenseman, or b) that the Caps have sustained a substantial number of games missed to injury by defensemen. Considering that this year alone Mike Green missed 33 games, and Tom Poti missed 61, the injury thing is looking like a good explantation, at least for this season.

It is worth noting that after Dennis Wideman was obtained at the trading deadline, Sloan dressed for four of the next 14 games, until Wideman was injured (and, of course, Green was still out). Sloan is signed through next season, but to the extent Green and Wideman return healthy, added to Carlson, Alzner, and Jeff Schultz, there seems little room for Sloan to crack the lineup for many games. In that sense, Sloan seems to have been dealt a hand with three of a kind in getting a reasonable amount of ice time for the Caps. But his skill hasn’t allowed him to draw the fourth that would give him a winning hand in terms of more ice time.


* numbers from behindthenet.ca
Posted by The Peerless at 1:36 PM No comments: