“We should not moor a ship with one anchor, or our life with one hope.”
-- Epictetus

Last season when we came to this portion of the show, we had Evgeny Kuznetsov, Michael Latta, and Patrick Wey to talk about.  Kuznetsov had a solid rookie season this year, Latta filled in as a role player with a lot of games played.  Wey might have gotten a bit more of a look than he got last season, but two concussions, the more recent of which was suffered this past October, limited him to a total of three games this season with the Hershey Bears.  All things considered, the Caps saw positive movement as a group from last season’s harbingers of hope.

This season, the Caps dressed eight rookies.  We have already covered Kuznetsov, Latta, and Andre Burakovsky.

The other five rookies had very limited exposure to the NHL this season. 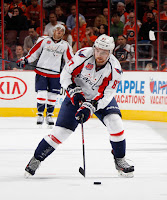 It is not unheard of for a little-known prospect to be invited to a club’s development camp, make an impression, and parlay that into an invitation to training camp in the fall.  Liam O’Brien did just that.  The undrafted forward from Nova Scotia did make an impression in development camp last July and did get an invitation to training camp.  He did not stop there.  Michael Latta described him as “like a dog on a leash.”  His unbridled enthusiasm for wreaking havoc, not to mention recording a Gordie Howe Hat Trick in a preseason game against the Boston Bruins allowed O’Brien to author the most unlikely story from training camp.  He made the Opening Night roster and was in the lineup against the Montreal Canadiens.

He recorded his first NHL goal (against Vancouver) and an assist over his first eight games, all in a fourth line role.  However, he did not record a point over his next four games, not reaching the seven minute mark in ice time over his last three.  After 13 appearances, only one of them over an 11-game span from November 14th through December 6th, he was reassigned to Hershey.  Not that he didn’t leave an impression.  Coach Barry Trotz said of him:

“He’s a 20-year-old.  “He’s not even the same player he was at development camp. He’s so much better, he’s so much more prepared, he’s very mature. I think he’s going to have a pretty good career. I need him to play. I said, ‘It’s no fun just practicing. You need to play and be a part of that.’ I said, ‘I’m very conscious of you being a long-term Capital player with the right DNA to have success.’ We’ll just play it one day at a time with him. His head is in a good place.”

Chris Brown is the only player remaining from the Caps’ ending the sad saga of Martin Erat’s stay in Washington.  He appeared in six games to close the 2013-2014 season, and that would be more than he got this season.  He appeared in only five of the Caps first 18 games of the season, getting a total of 32:18 in ice time.  He was on the roster largely to fill a roster spot that would have been held by Tom Wilson, but Wilson was still recuperating from an off-season injury.  With one goal and two penalty minutes on his resume over his five appearances, he was assigned to Hershey in late November.  In 64 games with the Bears he was 17-11-28, plus-3, with 70 penalty minutes.

Before this season, Cameron Schilling had the misfortune of appearing in one game in each of the previous two seasons, both times a witness to the Caps being shut out.  This season he got the call in February to join the club to fill in for injured Mike Green.  He did not record a point in 13-plus minutes of ice time, but he did get to participate in a win, a 3-2 Gimmick win over the Ducks.  Alas, in his other three appearances the Caps were defeated, but at least they were not shut out in any of the losses.  Schilling was assigned to Hershey on March 13th, where he finished the season with the Bears.  He played in 63 games with the Bears, going 3-15-18, plus-14, with 63 penalty minutes.

That Stan Galiev appeared in a game at all this season for the Caps is a reflection of his determination.  At 23 years of age, almost five years since he was a third-round draft pick of the Caps, it looked as if the term “prospect” was fading next to his name.  With the season winding down and a vacancy opening up when Tom Wilson took a puck to the head against Detroit, Galiev was called up from Hershey in early April.  It was the proverbial “cup o’ coffee.”  In two games he skated a total of 18:46, recorded two shots on goal, but did take away the memory of his first NHL goal, a late power play goal in a 4-2 loss to the New York Rangers on the last day of the regular season. He earned the promotion with a fine season in Hershey, tying for the team lead in goals (25), 15 of them on the power play to lead the AHL. 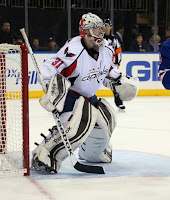 Last season, Philipp Grubauer appeared in 17 games, one of four Caps goaltenders to appear in more than ten games.  That not-so-merry-go-round did not repeat a turn this season, what with Braden Holtby getting 73 games.  Grubauer did get into two games, though.  One was the product of the schedule.  The Caps had back-to-back games in early February, and after beating the Ottawa Senators in the first of those games, the opportunity presented itself for Grubauer to get a recall start in the follow-up game against the Ducks.  He stopped 23 of 25 shots in regulation and overtime, then stuffed Ryan Kesler in the third round of the freestyle competition to give the Caps a 3-2 win.

His second game came under less predictable, yet higher-stakes circumstances, Game 2 of the Eastern Conference Quarterfinal playoff series against the New York Islanders.  Braden Holtby was taken ill and could not start.  Grubauer manned the net with the Caps down a game to the Isles.  It was not a masterful effort on Grubauer’s part – he allowed three goals in the first 34 minutes of the game.  But he closed the door after that, allowing the Caps to erase a two-goal deficit, and Washington won, 4-3, to tie a series they would go on to win in seven games.

Fearless’ Take:  Grubauer is the class of this “Hope” class, and his just-signed contract with the club is a clear signal that his apprenticeship in Hershey is at an end.   He has passed just about every test in coming through the development pipeline, and he has been a solid performer in his assignments with the Caps.

Cheerless’ Take: The skaters all have pretty nice stories, but that’s not usually a selling point to get playing time at this level.  Galiev probably moved furthest this season, putting himself back in the mix of young forwards who could get a call-up to the team next season.  But it is hard to see how any of these four skaters get a long stretch of games with the Caps unless injuries hit the team hard.

Not every rookie class is going to have the same promise.  Last year’s, with Kuznetsov finally making it to the Caps’ lineup after years of waiting, was a decent class.  This year’s class does not appear to have that level of potential. It would appear that it is at goaltender, with Grubauer, where hope lies for contributions in the future.