...but the window isn't open long

Blogger Ted L. started something. Ted asked how many players who have won multiple Hart Trophies have not been named to the Hockey Hall of Fame. We noted that of the 16 players with at least two Hart Trophies -- not including Alex Ovechkin -- only Dominik Hasek is not (yet) enshrined.
Over at Japers' Rink, J.P. noted that of the 16 players we identified, none are without their name on the Stanley Cup.
True, but the window for ordering up the services of an engraver is historically small. Consider the table below... 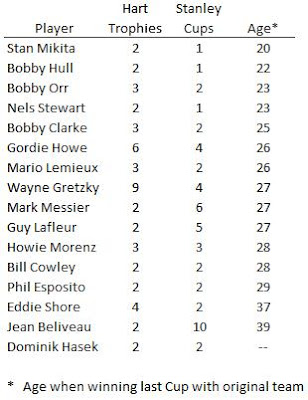 A few things to note about that table...

- Dominik Hasek did not win a Cup with his original team. He won his first Cup with Detroit in what would be his third city (Chicago and Buffalo being the first two), then won his second Cup after leaving for Ottawa and returning to Detroit. His experience is instructive, and we'll get to that.

- Eddie Shore won his last Cup at the age of 36 in what would be his last year with the Boston Bruins. He was not in the prime of his career by this time, and this Cup win came ten years after his previous success.

- Jean Beliveau won 10 Stanley Cups for a bona fide dynasty, winning his ten Cups in the space of 16 seasons. These days, winning four in 11 years is as close to a dynasty as we seem to be able to get.

Hasek, it is worth noting, won neither of his Hart Trophies with the team he backstopped to a Stanley Cup. He won both trophies with the Buffalo Sabres, and in neither year in which he won the Hart did his team win more than two rounds of the playoffs. In Detroit, a team was -- in fact had already been -- built around him. Caps front office, take note.

History seems to confirm what folks suspect -- hockey is a young man's game. There seems to be, even for the best of the best, a narrow window in which to win the biggest trophy of all (at least playing for the team with which they started their career). Of those multiple Hart Trophy winners, the last player to win a Stanley Cup with the team that drafted him was Mario Lemieux, in 1992 at the age of 26.

This isn't intended to be the voice of doom with respect to the Capitals' chances of ever winning a Cup. In fact, we like their chances to do it soon (as long as the front office does their job). But Ovechkin will be 25 at the end of next year -- approaching middle age on the table displayed above -- and there might be only so many "next years" in which to do it. June 20. New York (peerlesspress). The National Hockey League shocked the hockey world this morning with its announcement that the NHL will forego the New Year’s Day “Winter Classic” format in favor of a radical new format. The NHL announced that all 30 teams will be in action on New Year’s Day 2010, replacing the single-game format that was employed by the league in 2008 and 2009.

Commissioner Gary Bettman announced the change, telling reporters that, “if one game is good, 15 is 15 times better.” When asked if such a change would be too much of a good thing, Bettman scoffed at the notion, replying that with the change in format the league would realize new streams of revenue that would strengthen the NHL for years to come.

As part of the change in format, the NHL will sell naming rights to games. Already, the NHL has announced that the Phoenix Coyotes will host the Colorado Avalanche in the Tostitos Fiesta Winter Classic, and the Florida Panthers will host the Tampa Bay Lightning in the FedEx Orange Winter Classic.

Talks are reportedly underway for the Minnesota Lightning and the Vancouver Canucks to meet in the Humanitarian Winter Classic in Boise, Idaho; for the Carolina Hurricanes to host the Columbus Blue Jackets in the Meineke Car Care Winter Classic; and for the Atlanta Thrashers to host the St. Louis Blues in the Chick-Fil-A Winter Classic. The Thrashers, however, are said to be lobbying the league to play the Panthers in what will be named “The World’s Largest Outdoor Cocktail Winter Classic.”

When news leaked of the revised format, reaction was swift in the hockey world. Larry Brooks of the New York Post penned a column decrying the move, stating that “the only classic games in the NHL are played in Manhattan.” Bruce Garrioch of the Ottawa Sun reported that Jim Balsillie was seeking to reverse the decision to award the Phoenix Coyotes a slot on New Year’s Day, arguing that the game should be moved to Ontario and rebranded the “BlackBerry Winter Classic.” Meanwhile, commentator and hockey icon Don Cherry exploded.

The Canadian Broadcasting Corporation plans to partner with the league in this endeavor and plans to broadcast all day on New Year’s Day from locations in Fahler, Alberta; Invermay, Saskatchewan; and Tignish, Prince Edward Island.

When asked to confirm rumors that the NHL would abandon its long history of a multi-round playoff format in favor of a “Cup Championship Series” that would pit the top two teams in the league, as determined through computer models, strength of schedule, and other criteria, in a single winner-take-all contest to be played in Louisiana Superdome, Bettman declined comment.