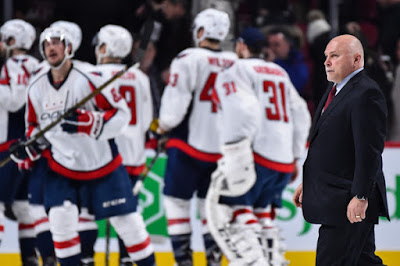 “Uncertainty and expectation are the joys of life.
Security is an insipid thing.”

When a team becomes only the third team since its creation in 1986 to win consecutive Presidents Trophies, when that team wins 50 or more games in consecutive seasons for the second time in club history, when that team becomes only the second team in NHL history to record at least 118 points in three or more seasons (the Montreal Canadiens being the other, having done it four times), and yet fails to get out of the second round of the postseason for the 25th time in 27 trips to the playoffs, one might start to wonder, will it ever happen. The “it,” of course, would be a Stanley Cup championship.

The Capitals managed their roster last year with a focus on breaking the string of misfortune that had them fail in 11 straight postseason appearances to reach a conference final. As all Caps fans know, that streak reached 12 straight playoff appearances when they were eliminated for the second straight season in the second round by the Pittsburgh Penguins, who would go on to their second straight Stanley Cup (note: the Penguins have five Stanley Cups, all of which have been earned having gone through the Caps to get there).

If last year, one in which the Caps engineered their roster for a deep playoff run, was one filled with expectations, the season they are about to embark on is one filled with uncertainty. It is a roster that still possesses skill among their top six forwards, top pair on defense, and in goal. However, it is one that lacks the depth and experience that last year’s roster had.

It is also a roster that will no doubt be younger on opening night. Karl Alzner, Kevin Shattenkirk, Justin Williams, and Daniel Winnik, all of whom were 28 or older last season, could be replaced by Madison Bowey, Christian Djoos, Jakub Vrana, and Nathan Walker, all of whom are 23 or younger.  With youth will come uncertainty.  Will they grow into more reliable, productive players in time for the spring, or will their progress be incomplete, requiring further seasoning in Hershey with the AHL Bears?

There is also the matter of players who occupied lesser roles in 2016-2017 who will be thrust into more responsible roles in the new season.  Can Brett Connolly (15 goals in a largely third-line role last season) jump into the top-six and duplicate, if not improve on last season’s surprising output?  If he cannot, is it time for Tom Wilson – who has yet to reach the 10-goal or 25-point mark in four seasons – to step into that role as a second line right wing behind T.J. Oshie in the depth chart?  Can Andre Burakovsky, who performed well in a third-line role last season, take the great leap forward and boost his numbers as a second line left wing replacing the departed Marcus Johansson?  Will Dmitry Orlov cement his spot on the top defensive pair with Matt Niskanen and perhaps pick up those shorthanded minutes that Karl Alzner (now with Montreal) had last season?

And then there is depth.  No team goes a full season with 18 skaters dressing.  There will be those times when circumstances dictate that the Caps dip into the farm system to find replacements who can contribute, if only for short stretches.  And even here, the Caps are trending young and/or untested at the NHL level, as the Bears’ training camp roster indicates, only three skaters having had any NHL experience last season (Riley Barber, Liam O’Brien, and Garrett Mitchell).  It is conceivable that any of these three, not to mention players such as Lucas Johansen, Connor Hobbs, Travis Boyd, or Jonas Siegenthaler – players who could be regulars in the lineup someday – could be called upon to fill in.  But for this season at least, their effects on the Capitals’ performance is uncertain.

Associated with depth is the negative space of sorts flanking third line center Lars Eller and fourth line center Jay Beagle.  Last year they centered Andre Burakovsky and Brett Connolly, and Daniel Winnik and Tom Wilson (for the most part), respectively.  This year, they could be centering youngsters, or they could be breaking in more experienced, if not with the Caps (and perhaps less capable than last year’s cohort), wingers like Devante Smith-Pelly or Tyler Graovac or Alex Chiasson, a trio with fewer than 650 regular season and fewer than 50 postseason games among them.  Recall that Winnik, who played capably on the fourth line last season, has 717 regular season and 58 postseason games of NHL experience himself.

Last season, the Capitals had a certain, well, certainty with respect to its roster.  It was a known quantity, experienced, and filled with players with well-defined roles and expectations as to how those roles would be fulfilled.  It was built for a deep playoff run.  It was expected to make a deep playoff run.  But as it turns out, expectations can yield to the uncertainty of fate in the short-series format of the NHL postseason.

And now, while the Caps can still lay claim to a top-notch top-six cohort of forwards and a three-deep defense with Matt Niskanen, Dmitry Orlov, and John Carlson, the uncertainty of how the bottom six will perform or even who the Caps will ice among their second and third defensive pairs leaves Capitals Nation wondering just what lies in store for this team.  If everything falls into place, they could challenge for the top spot in the Metropolitan Division.  If players cannot step up into the roles departures have opened up, making the playoffs will be a challenge.  Last season, Capitals Nation knew expectations, but they brought little joy. This season, they will know uncertainty.