The Peerless Prognosticator is ON THE AIR!!! -- Caps vs. Coyotes, February 14th

Hi-ho, hi-ho, it’s on the road they go. The Caps start a five-game road trip tonight with a visit to Jobing.com Arena to visit the Phoenix Coyotes on Valentine’s Day. And hockey is a sport not immune to the charms of romance…

"Dear Rick...thinking of you and your broken face this Valentine's Day. Love, Brent"

"Dear Brent...We met all too briefly. Would like to see you again real soon. Love, Micheal"

"Dear Micheal...I'll follow you anywhere, even if it means getting between you and Brent...even if I have to jump every bench in the league. xoxo Eric"

Well...you get the point.

On this Valentine's Day the Caps take to the road in need of establishing some manner of consistently effective play. Maybe a road trip will be the tonic. The Caps are 5-2-2 in their last nine road games as they start this trip in Phoenix. The Coyotes, on the other hand, are 3-5-0 in their last eight home games, although the three wins have come in their last three tries. The five straight losses followed by three straight wins on Jobing.com Arena ice are a reflection of the Coyotes’ ability to prevent goals. The numbers look like this... 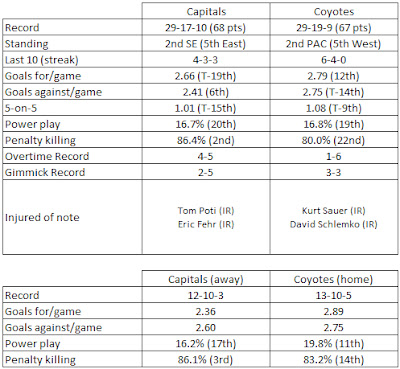 In the five straight losses they allowed 23 goals; in the three straight home wins coming into this game they allowed only two, including a pair of shutouts by Ilya Bryzgalov.

Bryzgalov might be rounding into form for a post-season run. Although his goals against average is rather, well, average (2.58, tied for 18th in the league), and his save percentage is not extraordinary (.917, 17th in the league), he is on a personal four-game winning streak in which he has allowed only four goals on 102 shots. That follows up a rather brutal stretch in which he was 2-6-0, 3.96, .896. Bryzgalov has one career appearance against Washington. He allowed three goals on 33 shots in a 4-2 loss to the Caps last season.

The Coyotes do not have two 50-point scorers, as the Caps do, but they do have two 40-point scorers. And somewhat unlikely ones they are. Keith Yandle leads the Coyotes in scoring and is doing it from the blue line. In fact, Yandle (9-37-46) leads all NHL defensemen in scoring. Yandle already has career bests in assists and points, and with nine goals in 57 games he would seem almost a lock to surpass his personal best in goals (12). He has been in a bit of a rut lately, though, going 0-1-1, minus-5 in his last five games. In two career games against the Caps he has one assist.

Ray Whitney is no stranger to Caps fans, having spent parts of three seasons with the Florida Panthers and another five seasons with the Carolina Hurricanes. But he exchanged Carolina red for that of the Coyotes last off-season, signing a two-year/$6 million deal. He has settled in as a reliable point getter – he has 15 points in his last 15 games from the left wing – but he has had some difficulty finding the back of the net himself. He hasn’t scored a goal in his last dozen games, and he has only two in his last 19 contests. In 58 career games against the Caps he is 19-32-51. Odd Ray Whitney fact, according to the Phoenix media guide. He owns a “roadrunner.” A 1970 Plymouth Roadrunner…Coyote…roadrunner. Get it? OK, let’s move on.

If Keith Yandle is the offense from the blue line, perhaps Adrian Aucoin is the stable defensive influence. Aucoin has contributed some offense of his own, but he is also has a plus-19 that is by far tops for the Coyotes. He also has 19 points (two goals, 17 assists), but has struggled to find his way to the score sheet lately, going without a point in his last ten games. He does have 11 points (5 five goals, six assists) in 26 career games against the Caps.

You remember him, don’t you? One of a bevy of candidates to assume the second line center role for the Caps, he was brought to Washington in trade for the stretch run last season. He had two goals and four assists in 17 games with Washington to close the 2009-2010 regular season, then went 0-1-1 in the seven-game loss to Montreal in the first playoff round. He signed with Phoenix in the offseason, but not without leaving behind a difficult situation with the Caps. With the Coyotes he is 7-17-24 in 57 games and has been effective in the faceoff circle (55.8 percent). He went 27 games without a goal earlier in this season and has only three in his last 15. He is 2-8-10 in 18 career games against the Caps.

Brooks Laich has only four goals at home this season, but he has seven in 25 road games. However, he has only one goal in his last 13 road games. He is well behind his 25-goal scoring pace of last season (he is on a pace for 16 goals), and if the Caps are going to make a push over the last 26 games of the regular season, they have to get more consistent secondary goal production from players such as Laich. He has a pair of goals and a pair of assists in four career games against Phoenix.

1. Simplify. Against a system-oriented team such as Phoenix with a goalie playing well of late, the Caps are going to have to keep things “road-trip” simple…get pucks in deep, go to the net, get rebounds. Fancy-schmancy isn’t going to do it here. And from that follows…

2. Make them pay. Washington ranks dead last in the league in the number of power play opportunities on the road. It’s not even close – their 74 opportunities are eight behind 29th-place Colorado. They have enjoyed their own power play 27 fewer times on the road than have their opponents had theirs. The Caps have to do a better job of forcing teams to defend and step outside the rules to do it.

3. Pass the test. Phoenix is not an especially dominating team on the power play, but they are effective enough. The Coyotes are 8-for-38 on the man advantage over their past 12 games (21.1 percent). Something to consider, given that only five teams have been shorthanded more times on the road than have the Caps. They will provide a worthy test for the league’s second best penalty killers.

In the end…another Western Conference team…another Pacific Division team. The Caps have not won this year against a Pacific Division team (0-3-1) and are 3-6-1 against the West overall. They get three opportunities against the Pacific this week, and they could mean the difference between keeping contact with Tampa Bay for the top spot in the Southeast or feeling the hot breath of Carolina and Atlanta closing in on the Caps.