Since taking a 7-1 beating at the hands of the Montreal Canadiens on October 20th, the Caps played in five consecutive one-goal games, three of them needing extra time to decide, going into their game against the Dallas Stars on Sunday.

The Stars arrived in Washington fresh off a 3-2 Gimmick win on Long Island on Saturday, pushing them past the .500 mark at 6-5-0.  The Caps entered the contest winners of their previous two games following a four-game winless streak, holding a 6-3-2 mark.

Michael Neuvirth was in goal for the Caps, while Richard Bachman was getting his first start of the season for the Stars, the second straight game in which the Caps faced a club’s number two goaltender.

It was evident that Bachman had some rust after sitting for the first 11 games of the season for Dallas.  He was fighting the puck early and allowed the game’s first goal when Jason Chimera stepped through the left wing circle and sent a harmless-looking backhand shot that snuck between Bachman’s body and his right arm.  Barely two minutes later Mike Ribeiro victimized his old team by taking a feed from Marcus Johansson and wristing a shot into the short side from the right wing face-off dot at 6:22 of the first period.

After that second goal, things unraveled for the Caps, or rather they became unraveled.  It started at the 6:33 mark when John Erskine was goaded into a bout with Ryan Garbutt.  The pair went off with coincidental minors and coincidental fighting majors that deprived their clubs of their contributions for the next seven minutes.

That was not all for the Caps, though.  Mathieu Perreault went off for hooking at 8:01.  Jason Chimera followed him off at 11:59 when he boarded Derek Roy.  And it was Perreault again just before the end of the period, heading to the box for tripping.

Dallas could not make good on any of their opportunities, though, as Michal Neuvirth slammed the door on the Stars.  He held Dallas without a goal on 11 shots for the period.  The Caps led at the break, 2-0.

Although the Caps managed to avoid any damage from the Stars’ power play, the penalties they took blunted the momentum they generated early in the first.  They had opportunities to recover that momentum when Dallas took a pair of penalties of their own in the second frame, Aaron Rome at 3:04 for tripping and Bachman at 9:10 when he shot the puck off the rink for a delay of game call.  The Caps were not any more successful on their power plays in the second period than the Stars were on theirs in the first period.  And it might have come back to haunt the Caps when Nicklas Backstrom took a hooking penalty just before the horn to end the second period.

The Backstrom penalty carried over into the third period, and the Caps successfully killed it off.  But what they could not do was clear the puck out of their zone, even after the penalty expired.  Dallas took advantage of that opportunity when Derek Roy snapped a shot past Neuvirth from the top of the circles.

That goal put the Caps back on their heels trying to protect the lead against a motivated Stars team.  Dallas peppered Neuvirth with an assortment of shots, but the netminder denied the Stars the tying goal.  His efforts were rewarded late, after Dallas pulled Bachman for an extra attacker.  Alex Goligoski shattered a stick trying to send a shot on goal, and the puck trickled to John Carlson.  Carlson fed Brooks Laich with only Goligoski back and without a stick.  As Laich crossed the red line with Goligoski trying to keep in his shooting lane, Marcus Johansson skated up on Laich’s left.  Laich slid the puck to Johansson, who wired it into the back of the Stars’ net to give the Caps a 3-1 lead with just 1:05 left.

That was not the end of the excitement, though. As the clock was winding down zero and the Stars once more skating 6-on-5, Goligoski fired a shot off the post to Neuvirth’s left.  The puck caromed out to Derek Roy, who fed it across to Michael Ryder at the edge of the left wing circle.  Ryder wasted no time snapping the puck over Neuvirth’s right pad to bring the Stars back within one at 19:54.  With only six seconds left, though, Dallas did not have the time to mount any more challenges, and the Caps skated off with their third straight win, 3-2, and the top spot in the Southeast Division.

Notes… Going 0-for-4 on the power play, the Caps are now 1-for-23 over their last nine games… Neither John Erskine nor Ryan Garbutt returned to the ice after their fight in the first period; both are described as having sustained “upper-body injuries”… Johansson’s goal was his first since scoring the Caps’ first goal of the season in a 4-1 win over New Jersey on Opening Night… Including Matt Hendricks’ game winning trick shot in a win over Boston, the Caps have seven game-winning goals from six different players after Johansson’s game-winning goal tonight; only Alex Ovechkin has two. 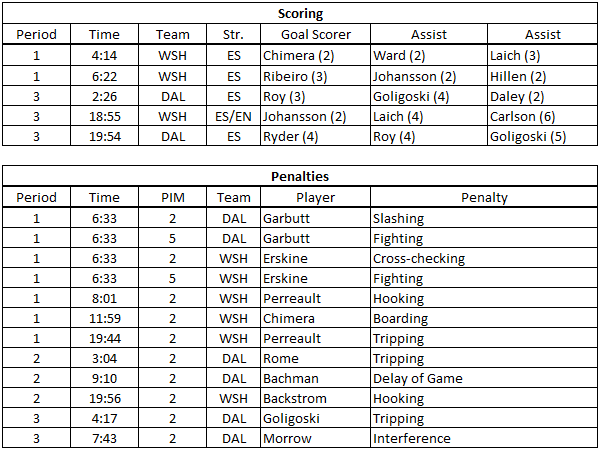