The Peerless Prognosticator is ON THE AIR!!! -- Game 44: Blue Jackets at Capitals, January 12th

The Washington Capitals wrap up the week’s slate of games on Saturday night when they host Metropolitan Division rival Columbus Blue Jackets.  The Caps are looking to close the week on a high note, bringing a three-game winning streak into the contest.  Columbus, on the other hand, has been the very definition of going “from pillar to post.”  Starting with a 4-3 overtime win over the New York Rangers to extend a winning streak to five games, they have alternated wins and losses over their last seven games (4-3-0).

The inability to gain any traction over multiple games is largely a product of an odd offensive trend over those last seven games.  Four wins, four times scoring four or more goals.  Three losses, three times scoring two or fewer goals, including being shut out once (4-0 by Tampa Bay last Tuesday).  The Blue Jackets have had some balance in their offense over their seven-game stumble, 12 different players with goals and 15 with points.

The goal scorers are led by Artemi Panarin (four).  It has been a bit of a roller coaster for Panarin this season.  He started off in fine fashion, going 5-10-15, plus-3, in his first ten games.  At that point, though, his goal scoring dried up for a spell.  Over his next 19 games he recorded 15 assists, but he had only two goals on 41 shots (4.9 percent).  Panarin snapped out of his funk with a two-goal game, including the game-winner, in a 4-1 win against Los Angeles on December 13th.  Starting with that game, Panarin is 8-7-15, plus-3, in 12 games going into Saturday’s contest.  Five of those games are multi-point games for Panarin.  He is 3-4-7, plus-2, in ten career games against the Caps.

Cam Atkinson has only one of the Blue Jackets’ 22 goals over their last seven games.  It is part of what is his own roller coaster of sorts this season.  While he has already matched in 42 games his goal output from last season (24 in 65 games), his season breaks down into three parts.  The first one started with a goal on Opening Night, the team’s first goal of the season in a 3-2 overtime win over the Detroit Red Wings.  It set him on a path to six goals in his first 15 games.  But then he turbocharged his goal scoring, peeling off a seven-game goal scoring streak over which he turned on the red light nine times, including a hat trick in a 4-1 win over Carolina on November 17th.  It was part of a larger hot spell for Atkinson, who recorded a total of 13 goals over an 11-game stretch from November 10th through December 4th, culminating with another hat trick in a 9-6 loss to the Calgary Flames.  Since then, Atkinson has returned to something resembling his early season pace with five goals in his last 16 games, but he has only one of those in his last seven contests.  He is 9-7-16, plus-1, in 23 career games against Washington.

Last season, defenseman Seth Jones took the next big leap to join the small population of elite blueliners in the NHL.  He had career highs in goals (16), assists (41), points (57), posted a career-high plus-minus (plus-10), recorded a career-high in game-winning goals (four), and posted his career best numbers on the power play (7-17-24).  He did it averaging a career-high 24:36 per game.  He finished fourth in Norris Trophy voting as the league’s top defenseman and was paired with P.K. Subban as a second-team all-star.  His goals and assists per game are almost exactly on his pace of last season, and he is doing it with even more ice time, averaging 26:08 per game going into Saturday’s contest.  He has been especially productive of late, posting points in ten of his last 14 games (2-8-10, plus-2).  Jones is 3-7-10, minus-1, in 14 career games against the Caps. 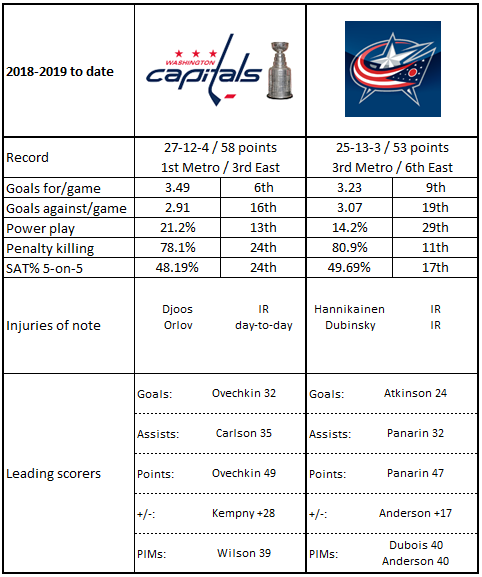 1.  John Tortorella-coached teams do not generally allow a lot of goals on a consistent basis.  Over his first three seasons the Blue Jackets allowed four or more goals 25 times (in 75 games in 2015-2016), 28 times, and then 19 times last season.  They already have done so 17 times in 43 games this season, a pace for 32 instances this season.

2.  Columbus has not lost consecutive road games since dropping decisions in Toronto and Pittsburgh by identical 4-2 margins in November.  Since then, the Blue Jackets are 6-3-0 on the road, but a loss to the Caps would make it consecutive losses on the road.

3.  The Blue Jackets are the only team in the NHL this season to allow eight or more goals in more than one game.  They dropped an 8-2 decision in Tampa to the Lightning on October 13th, and they lost a 9-6 contest with the Calgary Flames on December 4th.

5.  Almost half of the Blue Jackets’ 25 game-winning goals come off the sticks of two players: Artemi Panarin (six) and Cam Atkinson (five).

In 2017, Sergei Bobrovsky won his second Vezina Trophy as the league’s top goaltender.  He was one of ten goalies to earn Vezina votes last season.  He had a solid, if not Vezina-level 2.60 goals against average and .917 save percentage in his first 13 appearances this season.  Then the wheels came off.  He had a .899 save percentage in his next 13 appearances.  He appeared ready to break out of that slump when he pitched a 39-save shutout in New Jersey against the Devils on December 23rd.  Since then, though, he is 3-3-0, 3.23, .892 in six games, and on Thursday was told by the team to stay away, citing an “incident” that “failed to meet expectations and values” of the club.  It is not clear whether he will be reinstated for the Blue Jackets’ game on Saturday against the Caps.

And that unfolding drama puts the spotlight on Joonas Korpisalo and the just-recalled Jean-Francois Berube.  Confidence cannot be high.  Korpisalo has had declining save percentages in each of his four NHL seasons to date (.891 in 16 games this season), and after earning wins in his first four decisions is 3-2-2 (five no-decisions, which should say a lot about the status of Columbus netminding), 3.16, .888 in 12 games.  Berube has not appeared in an NHL game this season, only 34 in three NHL seasons in his career to a record of 9-10-4, 3.39, .898.  Neither Korpisalo nor Berube has a career win against the Caps, each of them facing Washington once.

When the Washington Capitals signed defenseman Matt Niskanen to a seven-year/$40.25 million contract as a free agent in 2014, he was coming off a career year offensively, 10-36-46, plus-33, in 81 games for the Pittsburgh Penguins.  It was an aberration.  Niskanen is not that offensive producer; he has been more of a two-way defenseman over the other ten seasons of his career entering this one, the sort of defenseman who might produce five goals or so and perhaps clear the 30-point mark, but his contributions would be more in being solid at both ends of the ice.  He has been that for the Caps, averaging six goals and 34 points per 82 games and has had better plus-minus numbers year-to-year in each of his first four seasons with the club, from plus-7 in 2014-2015 to plus-24 last season. He has been a consistent player this season – 2-5-7, even, in 20 home games and 3-6-9, minus-2, in 21 road games, but that minus-2 plus-minus is not consistent with his first four years with the club.  He has been in a rut offensively of late, going 1-1-2, even, in his last 13 games, but he is 2-15-17, plus-14, in 39 career games against Columbus.

The Caps are facing a team undergoing a stress test of sorts.  They celebrated head coach John Tortorella’s 600th career win as an NHL head coach on Thursday night, the first U.S.-born coach to reach that mark.  But it is a team whose anchor – goalie Sergei Bobrovsky – has an uncertain way going forward in what is the walk year of his current contract with the club.

For the Caps, Columbus’ problems are their own, of no concern to Washington.  The Caps merely need to tend to their own business, which is pretty good these days.  Three straight wins, seven wins in their last ten games (7-2-1) and 19-5-1 in their last 25 games has made them one of the most consistently successful teams in the league over the last two months.  There is little reason to think it won’t continue.