Here they were, a team on the outside looking in at the playoffs, desperate to close that last tantalizing difference in the standings to jump into the top eight in the Conference.  A team that was hungry, resolute, with a sense of urgency.

Yes, hockey fans, that was the Dallas Stars, who got three goals from their fourth line, a shorthanded goal, and 35-save shutout from Kari Lehtonen in beating the Washington Capitals, 5-0, at Verizon Center.

It was a performance by the home team that might have been its worst, given the stakes and the effort, since the Capitals teams of the late 1970’s, a game that should embarrass anyone drawing a paycheck from the Capitals, from the stick boy to the owner’s suite.

For ten minutes the Capitals looked competent, even – dare we say it – competitive.  Then the Caps reverted to the same tired old tendencies that have plagued them all season, being meek in the neutral zone, ceding territory, and letting other teams dictate pace at 5-on-5.

The Stars capitalized 15 minutes into the first period when the Caps, in another disturbing return to form, could not clear the puck from their own end.  Tyler Seguin outdueled two Caps for the puck behind the net, and when the puck sprang free, Jamie Benn gloved it down from the edge of the left wing circle.  Benn fired and Seguin, who hustled out from the corner to the front of the net, redirected the Benn shot with the end of his stick blade and past goalie Jaroslav Halak for the only goal the Stars would need.

Not that they were satisfied.  They would add a goal on a 2-on-none break, finished by Ray Whitney 9:16 into the second period.  Just 34 seconds after that they would add a goal by Dustin Jeffrey when three Caps – Julien Brouillette, John Erskine, and Chris Brown – defended the guy without the puck in front, Alex Chiasson. 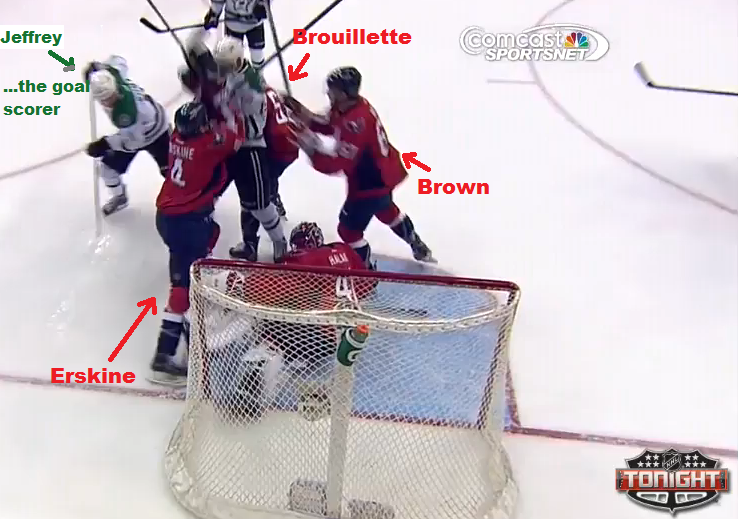 In the third period Jeffrey got his second of the game when the fourth line was allowed to work some tic-tac-toe passing, Chiasson to Whitney to Jeffrey, to make it 4-0.  Then, in the coup de grace, Ryan Garbutt added a shorthanded goal with 5:10 left to compete the scoring.  By that time, the few hundred or so (or so it seemed) who remained in the stands couldn’t even scare up enough effort to boo.  It was, perhaps, the practical end of the Caps’ playoff hopes for the 2013-2014 season.

-- This was Game 76 of the season.  Game 76.  And yet, the Caps looked – both in terms of effort and execution – as if it was a late September exhibition game.  But really, when it was John Erskine, Chris Brown, and Julien Brouillette being victimized on the Stars’ third goal, doesn’t it seem that this would be the sort of lineup you would see in a late September exhibition game?

-- Dallas won the even strength matchup, 4-0, on the scoreboard and outshot the Caps, 32-25.  Dallas had a Corsi-for in 5-on-5 close score of 55.1.  The same problems this team had in the first month of the season are the same problems they have in the last month of the season.  They stink at even strength.  If you can’t compete at even strength – and let’s face it, the Caps can’t – you aren’t going to win many meaningful hockey games. 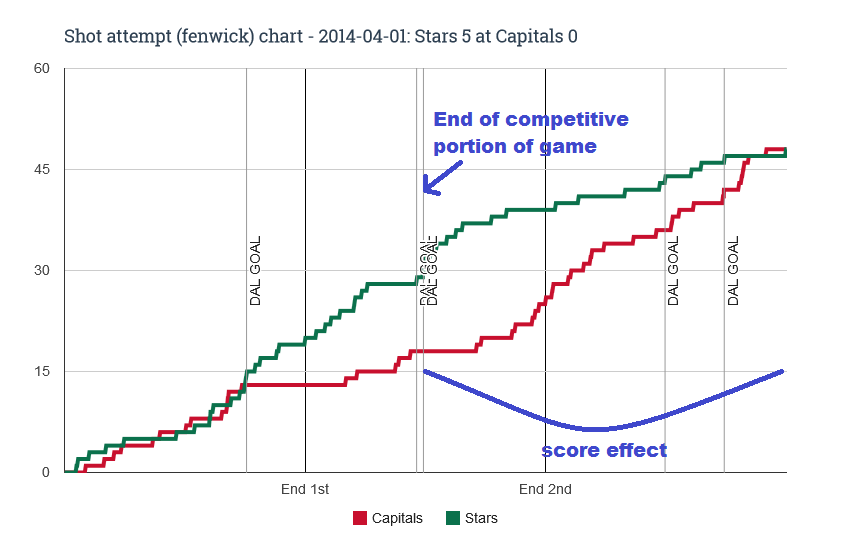 
-- Eric Fehr was the anti-Alex Ovechkin in one respect.  He was the only Capital not to finish in minus territory tonight.

-- Alex Chiasson was the best Alex on the ice tonight.  He recorded his first career three-assist game and his second three-point game.

-- Ovechkin has gone 48 consecutive periods without an even strength point.

-- Nicklas Backstrom was a minus-2, making him minus-21 for the season.  That’s a combined minus-57 for Backstrom and Ovechkin.  Only Edmonton (Nail Yakupov and Sam Gagner, minus-61) has teammates with a worse combined plus-minus.

-- At least the Caps didn’t blow a two-goal lead or give up a goal less than two minutes after scoring one.

-- Starting with the 2-on-none goal nine minutes into the second period, the Caps allowed that, a 2-on-1 rush, and a 3-on-1 rush on consecutive shifts.

-- Braden Holtby allowed a shorthanded goal, the seventh such goal he has allowed this season.  Only Toronto’s Jonathan Bernier has allowed more (8).  Only five goalies have faced more shots on goal while shorthanded than Holtby.

It is the end.  Oh sure, you can do the arithmetic and say if this team does this, and the other team does that, and the Caps catch lightning in a bottle, they could squeak into the playoffs.  But if you saw that decrepit performance tonight, and you still think there is anything other than a technical, mathematical possibility that the Caps can make the playoffs, you should seek counseling.

We have been watching Caps hockey since 1984.  In all that time, we cannot remember a worse performance, a more pitiful effort, given the stakes at hand, than what the Capitals displayed tonight.  At least the teams that took the ice before the rebuild, despite not having nearly the skill set this club has, gave an honest effort.  Even the teams in the 1980’s and 1990’s, teams that could not boast the top-end skill level on this team, almost always left it all on the ice in games that mattered.

In a sense, though, that is a bit unfair to the players.  The people charged with drawing up the strategies, of installing the schemes, of "coaching," seem utterly out of their element here.  It is not at all evident that they have a clue how to fix what it is that ails this team, and frankly, even if they did, the talent is too thin at too many positions to give anyone any confidence that "anything can happen," if they get into the playoffs.

This is a team that 76 games into the season cannot execute the simplest of plays, looks utterly bewildered when trying to escape their own zone, lack the wherewithal to make other teams defend their house in their own end, and fold like a cheap suit at the mere whiff of adversity.  These are things we have seen too much, too often this season.

Miracles do happen, and it would take a whopper for this team to make the playoffs.  What seems more likely, though, is that you saw an effort that could – or perhaps should – cost some people their positions tonight.