Washington Capitals: That Was The Week That Was - Week 24

Country music legend Merle Haggard once wrote about “California on my mind.”  Well, for the Washington Capitals, Week 24 was California “off” their minds, and it showed.  It made for the sort of week the Caps haven’t seen in quite a while. 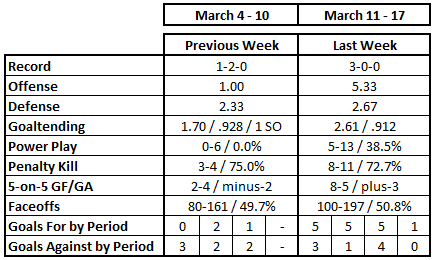 Week 24 was the first week in quite a while in which the Caps played more than one game to a perfect record.  They went 3-0-0, the first time they were perfect with that many games played since they went 3-0-0 in Week 10 back in early December.

Making it better, the Caps put an up and coming team in its place, and then they turned their attention to a divisional opponent against which they had two opportunities to drive a spike into their fading playoff hopes, opportunities the Caps took advantage of in a big way.

Washington hosted the Winnipeg Jets to open the week, a team that beat the Caps in overtime four weeks earlier, a win that propelled the Jets to a 9-3-0 record in their next dozen games before visiting Washington.  The Caps caught the Jets in the fifth of a six-game road trip, and it might have been a factor in returning the favor in a 3-2 overtime win of their own.

They followed that win with a back-to-back/home-and-home set of wins against the New York Islanders in which they outscored the Isles, 13-6, in their biggest two-game offensive explosion of the season.  The sweep left the Islanders 12 points out of a playoff spot by week’s end and enabled the Caps to maintain a two-point lead over the Pittsburgh Penguins at the top of the Metropolitan Division. 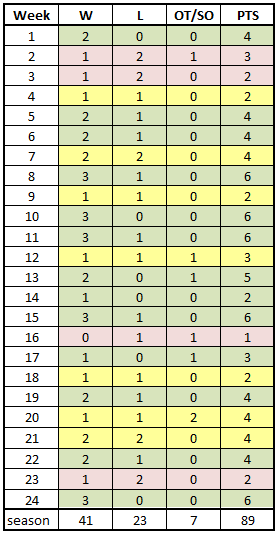 It is hard to jump very much in the team statistical rankings this late in the season, but a 16-goal week for the Caps pushed them up two spots in scoring offense, from 12th to 10th in the league.  Only San Jose scored more goals in Week 24 (21), but they needed four games to do it.  The Caps led the league in goals per game for the week (5.33).

Not that they did it by shooting the puck, though.  The Caps had 96 shots on goal for the week, ranking 21st overall.  What they were was efficient.  Six players had shooting percentages of 20 percent or better for the week, led by Lars Eller, who had two goals (one an empty-netter) on three shots for the week (66.7 percent).

It was T.J. Oshie, though, who led the team in goals for the week with three.  It was a welcome turn for the right winger, who snapped a 19-game streak without a goal when he potted a pair in the Caps’ 7-3 win over the Islanders on Thursday.  He added another for good measure in the 6-3 win over the Isles the next night.

The good and the bad might have been wrapped up in Evgeny Kuznetsov, though.  He led the Caps in scoring for the week with seven points, and his only goal was the game-winner in overtime against the Jets to open the week.  However, he went out with an upper-body injury in the last game of the week, the second against the Islanders when he was slashed by Thomas Hickey as he was breaking to the net, and then he was tripped by goalie Jaroslav Halak’s stick, causing him to slam awkwardly into the end boards, apparently injuring his left arm.  He is out for the time being, considered day-to-day.

On the milestone side, Tom Wilson assisted on a first period goal in the Caps’ 7-3 win in Brooklyn against the Islanders on Thursday.  It was his 100th career point in the NHL, the 78th player in Capitals history to hit triple digits with the club.

It might not sound particularly impressive, but the Caps allowing three or fewer goals in all three games for the week extended their streak of such games to five, the longest such streak they have had since stringing together 14 such games (Games 27-40) that constituted the entire December schedule.  Perhaps not coincidentally, the Caps were 10-2-2 in those games, while they are 4-1-0 in this five-game stretch.

It was not a product of shot attempts allowed, the Caps finishing seventh among 20 teams playing three games this week in 5-on-5 shot attempts allowed.  But their shot attempt differential at fives (minus-25) was third-worst among those 20 teams.  The Caps give appearances of being a team that in trying to be so selective in the offensive end are putting pressure on their defense to be better than its talent might allow.

The goalie “reset” continued to start Week 24, Philipp Grubauer getting the nod against the Winnipeg Jets and the first of the back-to-back games against the Islanders.  He was solid in the two wins, if not spectacular.  Grubauer struggled a bit early in games, allowing three goals on 20 first period shots faced (.850 save percentage).  But he was perfect in the second periods of games (24 for 24) and allowed only one goal in each of the third periods of games, stopping 20 of 22 shots in all (.909; he did not face a shot in overtime against Winnipeg).  The two wins extended a considerable run of fine play for Grubauer, who is now 11-3-2, 1.68, .944, with two shutouts in his last 21 appearances.

Braden Holtby returned to the lineup after sitting for four games as part of his “reset.”  He got the call in the second of the back-to-back games against the Islanders to close the week, and the results might be characterized as “mixed.”  He faced only four first period shots, stopping all of them as the Caps took a 1-0 lead into the first intermission.  Then, he allowed just one goal on nine shots in the second period as the Caps took a 3-1 lead.  That he allowed two goals on 12 shots in the third period might look worse than it was, since the goals game in the latter half of the period with the Caps holding a 5-1 lead.  And, there is the matter of their being a certain amount of rust that could have accumulated in his absence.  But he does win at home.  The win over the Islanders lifted his home win-loss record to 19-6-2.

It was something of an unusual week individually.  Nicklas Backstrom led the team with a pair of power play goals, and Alex Chiasson had one of the others.  T.J. Oshie had one, his first since he recorded one against the Philadelphia Flyers on January 31st.  Alex Ovechkin provided some normalcy with a power play goal of his own to round out the goal scoring.  Backstrom and Kuznetsov led the team in power play points with three apiece.

As a team, the Caps were very efficient with the man advantage.  They pounded Winnipeg for 12 shots on goal with a goal to show for it on the power play on their way to scoring five goals on 22 shots in just 19:25 in power play ice time.  But a thank you to the New York Islanders, who had something of a meltdown in the second of the back-to-back games, giving the Caps eight power play chances, the most the Caps have had in any game this season (they had six on four different occasions). 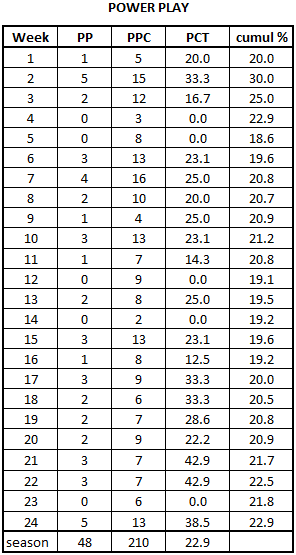 As good as the power play was, the penalty kill gave a lot of it back.  It would have been a lot better if the penalty killers could just have ended their week after the game in Brooklyn against the Islanders on Thursday.  Over the first two games of the week, the Caps went 6-for-6.  Philipp Grubauer fulfilled his role as being the “best penalty killer,” stopping all 13 power play shots he faced in 11:17 of shorthanded ice time.

Then there was the game against the Islanders to end the week.  All three of the Islander goals came on power plays, but two of those came late with the Caps holding a comfortable lead.  Still, three goals on nine shots in 7:44 in shorthanded ice time did not reflect well on the penalty killers or on goalie Braden Holtby.  This is, or remains, something of an issue with Holtby who, among 51 goalies facing 100 or more shots while shorthanded, ranks 31st in save percentage (.868). 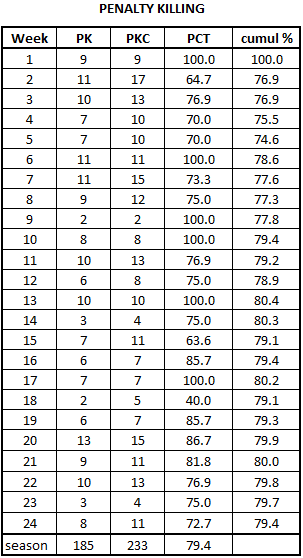 It was something of a typical week in the circle for the Caps.  They finished a couple of wins over 50 percent, and their top faceoff players had a typically split week. 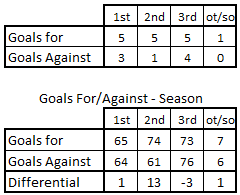 Consistency was the word to describe the week for the Caps in Week 24, at least as far as scoring goals was concerned.  The Caps finished the week recording a total of five goals in each of the three regulation periods, adding an overtime goal for good measure.  The five first period goals allowed the Caps to take leads into the first intermission in both games against the Islanders and finish the week still one of just two teams in the league without a loss when leading after the first period (St. Louis is the other).  The Caps have the best winning percentage in such games (24-0-1/.960).

That the Caps allowed four third period goals is eyecatching, but might be tempered by the fact that the Caps took multiple-goal leads into the third period in both games against the Islanders.  Still, the Caps ended the week with a minus-3 goal differential in the third periods of games this season, and this will be something that bears watching down the stretch.

Following up a rough start to the California trip in Week 23, but ending it with a win might have been just the thing that the Caps needed to set them off and running down the stretch as the season heads into its last few weeks.  The injury to Evgeny Kuznetsov casts a shadow over the club as they head to Philadelphia to start Week 25, but this is a club that, if not playing at the top of their game, is taking care of business at home and against weaker opponents.  Week 24 was both, a welcome result after putting California behind them.

And in that, we’ll let Merle have the last word (with some light adjustments)…

Well I’m a homesick bat couldn’t be no sicker
I’m proud to say that I’m a puck picker
That state and we just don’t agree.