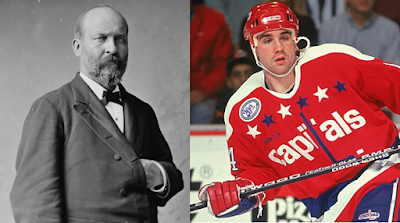 If one were to ask you, “who was James A. Garfield?,” you might stumble while looking for an answer before you remembered that he was a President of the United States.  His administration lasted just 199 days, the second-shortest presidency in American history.  It was cut short when he was shot by an assassin in July 1881 and succumbed to his wounds two months later.  Given the nature and volume of his accomplishments in the few months he was active as President, there is a lingering “what if” attached to his presidency.  What more might he have been able to accomplish in a full term?  In that respect, his presidency resembles that of a player who could be the franchise’s poster child for the question, “what if?”  Pat Peake.

James A. Garfield was born in Ohio in 1831.  He was the last of the seven “log cabin” presidents (the others being Andrew Jackson, Zachary Taylor, Millard Fillmore, James Buchanan, Abraham Lincoln, and Ulysses S. Grant).  His youth was a difficult one, losing his father at the age of two and growing up in poverty.  It was not until he reached his later teen years that he found a particular interest in public speaking.  It led him to begin a career in teaching, but after a short time he came to the belief that a career in education would not serve his development.  He decided to pursue a legal career.

Becoming a lawyer opened other avenues for Garfield, leading him to accept an offer from local officials to run for a state senate seat, winning election as a Republican.  When the Civil War broke out, Garfield’s inclination was to join the Union Army, but he was prevailed upon by the Governor of Ohio to keep his seat in the legislature.  That lasted only a short while, though.  In the summer of 1861 he accepted a commission and was eventually promoted to brigadier general.  Despite the increase in rank, he was concerned over the future of his military career and let his name be placed in nomination to run for a seat in the U.S. House of Representatives.  He won election and would serve as a member of the Ohio delegation for more than 17 years.

By 1880, Garfield had become the leading Republican in the House.  From that position, he could be expected to exert considerable influence on the 1880 nominating convention for the Republicans, and he was a supporter of the Secretary of the Treasury John Sherman (brother of General William Tecumseh Sherman).  Complicating the matter was that President Ulysses S. Grant was running for an unprecedented third term in office.  Those were just two candidates in what was a crowded field to open the balloting for the nomination.  Six candidates received votes on the first ballot, and while Grant captured the most, he failed to get a majority (Garfield received no votes on the first ballot).  Things did not change much on the second ballot, or the third.  In fact, nothing changed much over 35 ballots, Grant stuck between 304 and 313 votes, and James G. Blaine stuck between 257 and 284 votes, with other candidates, including Garfield, splitting the rest.  Blaine finally saw the writing on the wall after the 35th ballowt and cast his support to Garfield.  On the 36th ballot, Garfield won 399 votes and the nomination.

The general election was one of those odd instances in presidential politics in which the popular vote was extremely close (Garfield won by fewer than 2,000 votes of more than nine million cast), while the electoral vote margin was comfortable (Garfield: 214 – Hancock: 155).

Having won election, Garfield had to contend with warring factions in his own party, a leftover of the convention the previous summer, but it did not keep him from undertaking an ambitious agenda.  He was a strong advocate of promoting civil rights among African Americans, pursued civil service reform, encouraged expanded trade (particularly with Latin America), began efforts to expand American influence in Panama (with an eye toward building a canal there) and in Hawaii, and began efforts to expand the Navy.

Garfield’s role in those efforts came crashing to a halt on July 2, 1881, when he was shot twice by Charles Guiteau, a rebuffed office seeker, at the Baltimore and Potomac Railroad Station in Washington (near what is now the site of the National Gallery of Art West Building).

Garfield's condition improved somewhat over the next several weeks and was even able to hold a meeting with his cabinet from his sick bed.  But, his condition soon worsened, and by the end of August had lost a considerable amount of weight (likely a product of lingering infection brought on by his physicians searching for the bullet that pierced his abdomen with unsterile hands and fingers).  He was moved to Elberon, New Jersey, in early September, but two weeks later, on September 18th, Garfield passed away two months short of his 50th birthday.

Capitals fans of a certain age remember Pat Peake as a player with immense promise unfulfilled, a victim of a moment’s misfortune.  For those fans of more recent vintage who might vaguely recognize the name, it would be hard to overstate the idea that Peake did nave such promise.  First, consider his draft position.  The Capitals took Peake with the 14th overall pick of the 1991 draft.  That might not sound especially impressive until you realize who was taken with the next two picks.  The New York Rangers selected Alexei Kovalev with the 15th pick, and the Pittsburgh Penguins then took Markus Naslund.  Kovalev and Naslund went on to play a combined 2,433 regular season and 175 postseason games in the NHL, and they would combine to score 825 regular season and 59 playoff goals over their respective careers.

Peake certainly brought the goods from amateur hockey.  In 162 games over three seasons in the OHL, he scored 138 goals and recorded 319 points.  He made the jump to the Caps in the 1993-1994 season, and when he finished in the top-15 among rookies in goals (11) and points (29) despite appearing in only 49 games.  Among rookies appearing in at least 40 games, he was seventh in goals-per-game and points-per-game.  The sky looked to be the limit for Peake.

Things started to unravel for Peake the following season.  Mononucleosis limited him to just 18 games, failing to score so much as a single goal that season.  He rebounded in 1995-1996, going 17-19-36 in 62 games, but then he suffered the injury that would define his career as a Capital.  As the 1996 playoffs got underway, Peake was nursing a knee injury that kept him out of the lineup for two weeks, but he returned to play in Game 1 of the opening round series against the Pittsburgh Penguins, and he scored a pair of power play goals in Game 2 as the Caps took a 2-0 lead in games.  The Caps lost Games 3 and 4 at home, Peake recording only an assist in the two games.  That sent the series back to Pittsburgh for Game 5, the teams tied at two games apiece.  In the second period of the contest, Peake found himself in a footrace with Penguin defenseman J.J. Daigneault trying to prevent an icing call.  Peake tried to hook Daigneault to get position on him, but he lost his footing and crashed into the end boards feet-first.  The impact fractured Peake’s right heel in 14 places.

The injury ended Peake’s season, and he returned to play in only four games the following season.  In 1997-1998 he missed the first 16 games of the season before returning to the ice against the Edmonton Oilers on November 8th.  In that game he injured his ankle in what would be his last NHL game, his career over at the age of 24 (he officially retired the following September).

No one can say with any certainty that Pat Peake would have been the sort of player to get his number retired and his banner raised to the rafters of Verizon Center, but there is this.  If you look at his first two full seasons – his only two full seasons with the Caps (discounting the year he lost to mononucleosis), his 38 goals in 111 games (0.34 per game) at age 22 looks a lot like another player who had 40 goals in 125 games (0.32 per game) over his first two seasons at age 23: Peter Bondra.

It is the not knowing, the never realizing part that is so haunting about Pat Peake’s short career with the Caps.  It is not unlike the not knowing just what sort of President that James A. Garfield might have been had he not been assassinated six months into his first term.
Posted by The Peerless at 5:00 PM 1 comment: