The Peerless Prognosticator is ON THE AIR!!! -- Game 81: Bruins at Capitals, April 8th

“…with his practiced, pragmatic, praiseworthy, penultimate prediction of…”

You done prattling on, Fearless?

“I thought it was too prolix, myself…”

My, my , Cheerless…a multi-syllable word that did not end in “weiser.”

“I think Blatz is more his speed, cousin.”

Well, guys, were down to it, the last week of the season, and the Caps are in the playoffs.  Now it’s for seeding…

“…speakin’ o’ which, the blackbirds are eating all the seed you put down in the back yard…”

As I was saying, now it’s for seeding, but there are still chances to secure a high seed and opportunities to see how the Caps measure up against stiff opposition.  First up is the Boston Bruins on Wednesday night.  The Bruins come to Washington clinging by a bear claw to a playoff spot.  While they are still fourth in the Atlantic Division, they are tied with the Ottawa Senators in standings points (95) for what could be the last playoff spot in the Eastern Conference.

Simply put, the Bruins have put the fate of their season in the hands of goaltender Tuukka Rask.  And, he has been up to the challenge, at least in the five-game winning streak.  He was the goalie of record in each of the five wins on the Bruins latest streak (he left early with dehydration in a 4-2 win over the Rangers on March 28th) and posted a goals against average of 1.34 with a save percentage of .955 with one shutout.

It is part of what has been generally a fine season for Rask:
Rask’s problem, to the extent he has had one, is streakiness in general.  He has four streaks of four or more wins this season and four of three or more losses.  Against the Caps, Rask is 1-5-3, 3.00, .893, with one shutout in nine career appearances.

Rask has had to be sharp, because the Bruins have had trouble finding the back of the net.  The Bruins are on their current five-game winning streak despite scoring only 13 goals, almost a third of them in a 4-2 win over the Rangers to start the streak.  Milan Lucic has three of those goals, a welcome sight for the Bruins after going 11 games with just one goal to his credit.  It has not been the best of seasons for Lucic, production-wise.  With 18 goals for the season and three games left to play, he could miss the 20-goal mark for the first time in a full NHL season since he had nine in a 2009-2010 season limited to 50 games due to finger and ankle injuries.  In 26 career games against Washington, Lucic is 5-13-18, minus-1.

Carl Soderberg is the points leader for Boston in their five-game streak (2-4-6).  He had a four-game points streak of his own snapped against the Toronto Maple Leafs in the Bruins’ last contest.  He has shown an ability to score in bunches lately; he has three multi-point games in his last nine contests.  He has nine multi-point games on the season, third on the club, behind Lucic (10) and Dougie Hamilton (11). 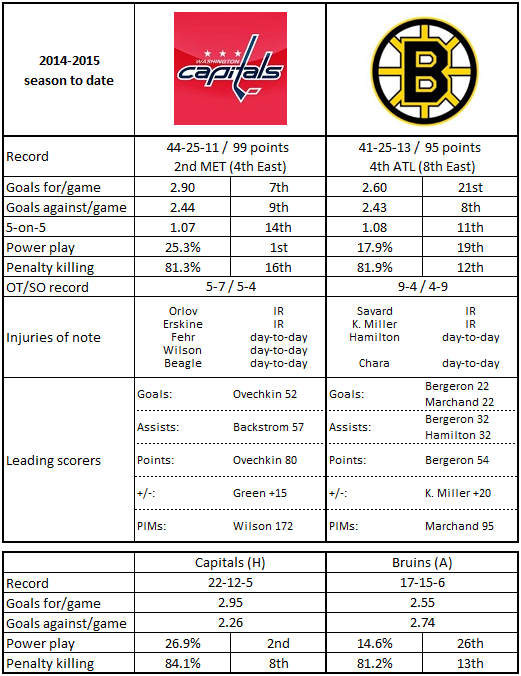 1.  Defenseman Zdeno Chara, who took a shot off his ankle in the Bruins’ 2-1 Gimmick win over Toronto on Saturday, skated in practice on Tuesday after missing a practice day on Monday.   Even if he dresses for the final three games of the season, he will have appeared in the fewest number of games (63) in a full season since he dressed for 65 games as a member of the New York Islanders back in 1999-2000.

2.  Boston spreads the points around.  The Bruins have only one 50-point player (Patrice Bergeron: 54), but they have seven skaters with at least 40 points for the season (Bergeron, Loui Eriksson, Milan Lucic, Carl Soderberg, Dougie Hamilton, Brad Marchand, and Reilly Smith).  Torey Krug could make it with a big week; he has 37 points.

3.  The Bruins’ power play is an odd one.  It ranks in the middle of the pack (19th/17.9 percent), but it does have five players with at least ten power play points: Dougie Hamilton (15), Patrice Bergeron (13), Torey Krug (13), Reilly Smith (11), and Loui Eriksson (10).  Carl Soderberg and Milan Lucic are pushing to cross that threshold with eight power play points apiece.  Only Eriksson has more than five power play goals (6).

4.  The Bruins are a team that can be had in the third period, provided you can score, because they cannot seem to.  Their 54 third period goals ranks tied for 29th in the league, with Buffalo, ahead of only the Arizona Coyotes (48).

1.  Much is made about the fact that Tom Wilson has 172 penalty minutes (third in the league) and 12 fights (sixth) this season.  But orneriness is not confined to Wilson.  Michael Latta has eight fights in only 51 games played.  That’s an 11-fight pace over the 67 games Wilson has played.  And these guys are roomies?

2.  Brooks Orpik is the big bopper on the club, leading the team in hits (300, third in the league).  Know who is second among defensemen?  Matt Niskanen (139).

5. Washington’s home possession numbers have been a bit misbehaved over the last month.  At 5-on-5 overall they Corsi-for and Fenwick-for percentages are 53.3/53.3, respectively.  Those look rather good.  In close score situations, though, they look less attractive: 48.9 and 49.7, respectively (numbers from war-on-ice.com).

The 2014-2015 season has not been memorable for Boston’s David Krejci, unless you count entries on medical charts being memorable.  Krejci has missed 35 games to a pair of significant injuries this season, a hip injury that cost him 20 games early in the season and a knee injury that put him on the shelf for 15 more in February and March.  He returned to the Bruins’ lineup on March 26th and has yet to find his rhythm.  In six games since coming back he is 0-3-3 while skating more than 19 minutes a game.  In the 44 games in which he has played he is just 7-22-29, plus-7, a level of production less than half of what it was in 80 games last season (19-50-69, plus-39).  For Boston to entertain any serious thoughts of a making the playoffs, let alone making a deep run, it would be best for Krejci to find his game.  He is 5-13-18, minus-1, in 26 career games against the Capitals.

The Washington Capitals selected Stanislav Galiev with the 86th overall pick in the 2010 entry draft.  On Wednesday night, it is very likely that he gets his first taste of NHL action.  He would be the third Capital from that draft – goalie Philipp Grubauer and forward Evgeny Kuznetsov being the others – to make the leap to the NHL.

There really is not much that one should find intimidating about the Bruins at the moment, at least in terms of their offense.  They have not scored more than three goals in a win since March 8th (a 5-3 win over Detroit), and over their last nine road games have a total of 21 goals (2.33/game).  Having a goalie playing well at this time of year is what any team would hope for, but there is relying too much on that attribute as well.

This does not look like Bruin team built to last for a long playoff run, if they get there at all.  On the other side, the Caps are averaging 3.00 goals per game over their last 17 games, with a goal differential of almost two-thirds of a goal per game, and are playing to an 11-6-0 record in those games (three of the six losses were by one-goal).  All things considered, the Caps seem better positioned to do some harm in the post season.