The fine folks over at Japers' Rink had the stupendous idea of printing up signs for last night's game expressing solidarity with Alex Ovechkin, sentenced to a two-game suspension by the league for his collision with Tim Gleason a few nights ago. By all accounts, it was a hit (no pun intended). But little did they know what they unleashed... 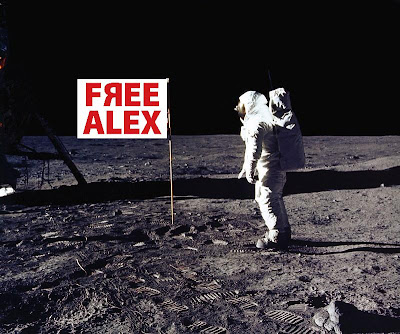 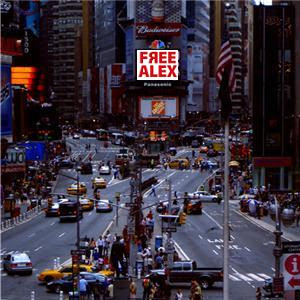 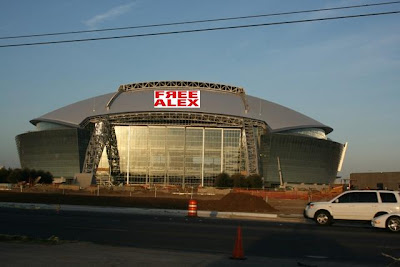 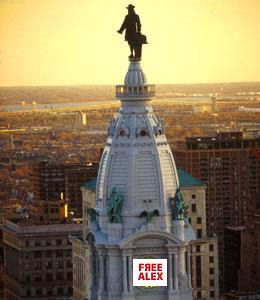 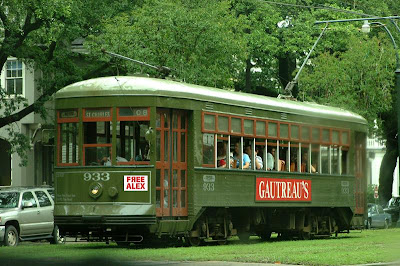 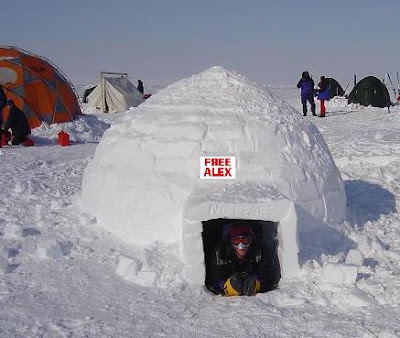 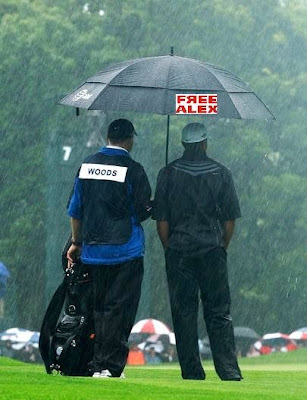 Countries topple from lesser movements. Power to the people!!!
Posted by The Peerless at 10:05 AM No comments:

If you diagrammed a play, wrote up a game plan, ran plays in practice, they would look a lot like the first 56 minutes of the Caps’ 6-2 win over the Florida Panthers tonight. The Caps were that dominant. Yes, Florida was playing their second game in two nights and third game in four nights. Boo-hoo. The Caps have had four such runs of games so far this year, so you’ll forgive the Caps if they lacked the politically correct amount of sympathy.

And yes, the Cats were playing without their number one goalie, forced to use backup Scott Clemmensen on consecutive nights. Well, boo-hoo-hoo. Take Keith Ballard’s stick away from him.

And yes, the Panthers were without top forwards David Booth and Cory Stillman. Well, gee… we didn’t see Alex Ovechkin or Mike Knuble out on the ice, either. Call a whaaaaaaa-mbulance.

Nope, tonight the Caps did what fans want them to do – take an opponent, run them into the ice early, then stand on their throats and don’t let them up. It worked for 56 minutes. Had the Caps managed to keep it up for those last four minutes, goalie Semyon Varlamov would likely have had his second straight shutout. But the Caps got a bit lackadaisical in those waning minutes, and the Panthers got a couple of markers.

But let’s focus on some of the good stuff for the moment, eh?...

- Nine different players had points for the Caps, three of whom had multi-point games (Brendan Morrison, Brooks Laich, and Alexander Semin).

- Alexander Semin was 2-2-4 tonight, meaning that he has four goals in his last four games. Trouble is, the first of those games was November 11th. He didn’t look the worse for wear on his injured wrist, though. He launched ten shot attempts at Panther goalies, five of them reaching the net, two of them going in.

- Matt Bradley is the hardest working ten minute a night player in the league. A shorthanded goal, a sweet curl-and-drag that left Dmitry Kulikov gasping for air (unfortunately, Bradley didn’t convert that one), a takeaway, and winner of the only faceoff he took. It’s time, folks, to… - A guy with a name like “Mike Duco” is a villain in waiting, the sort of guy who gets a film credit like “second thug on the right” at the end of a gangster movie. Well, he was on full display tonight in this, his second NHL game. Alexandre Giroux applied an enthusiastic check on Kulikov in the Panthers’ end of the ice – the sort of thing players do (or should do) all the time. Kulikov went down in a heap to the cheers of the crowd. Duco took this personally, apparently, and chased Giroux down at the opposite blue line, proceeding to pummel Giroux about the shoulders. Giroux, not getting the memo that said, “thou shalt not finish a check,” took his lumps for the team. When Duco was peeled off Giroux, he was give a two-minute penalty for instigating, a five-minute penalty for fighting, a ten minute misconduct, and a game misconduct. It was the sort of performance you’d see by a marginal prospect in a preseason game, hoping to impress the coaches with his moxie. The 27 minutes in his second game was certainly impressive. He is hardly a novice when it comes to bareknuckled contests, though. He’s had two fights in the AHL so far this year, nine last year in the AHL, eight the previous year in the OHL (including postseason), seven the year before that, and… well, you see the pattern.

- Florida took 43 minutes in penalties tonight, giving the Caps 12 power play opportunities. The Panthers didn’t get cheated on their infractions, either. In addition to young Mr. Duco’s hijinks, the Panthers were whistled for slashing (twice), hooking (twice), high-sticking, elbowing, boarding, and slashing. The Panthers wore the ice down to the cement blazing a path to the penalty box.

- The Caps’ 44-28 lead in shots doesn’t really tell the story of dominance. They out-attempted the Panthers 84-50 (including misses and blocked shots). The only Cap without a shot on goal – not just an attempt, but a shot on goal – was Jeff Schultz (yes, he did have one attempt – it was blocked).

- How can a guy who pots 75 goals in a season look so completely flummoxed when glorious opportunities appear on his stick in close? Such was the night of Alexandre Giroux, who probably should have had a hat trick tonight. That he didn’t (despite getting a whopping 6:45 in power play time on ice) is telling.

- Mathieu Perreault has no fear. None. We continue to be impressed by his compete level.

- Call CNN! Karl Alzner took a minor penalty – his second as an NHLer. The thing is, he got called for the penalty (high-sticking) right after it looked like he took a stick in the chops.

- David Steckel is officially snake-bitten. He had his chances tonight, too, but the puck seemed to have eyes enough to slither past the pipe on a couple of occasions. When he gets his first goal, he’ll get it facing the wrong way, backhanding the puck off three bodies and a post. It’ll probably feel like an Ovechkin wrister to him.

- The first Panther goal could be said to be on Varlamov, as Stephen Weiss collected his own long rebound and flipped it past Varlamov. But does someone want to explain this?... 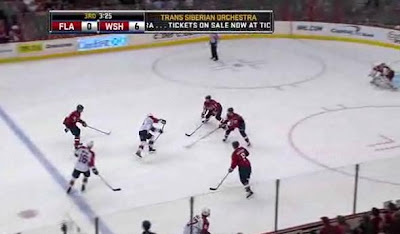 …how does a guy take a pass in his own right wing faceoff circle, skate the length of the ice, get surrounded by four Caps, and still get a clean shot off with two defenders doing a good job of screening their own goalie? And no one takes him out of the way of his own rebound?

- Keith Ballard was in a giving mood. He was credited with more giveaways (five) than the rest of his teammates combined (four).

- Gotta be the stick. It’s five games in a row and counting for Eric Fehr registering a point (and six of his last seven).

- The Caps have scored 17 goals in three games against Florida so far this year. It’s worth noting that Alex Ovechkin has played in none of those games.

It would have been nice to get Varlamov that second shutout in a row, but that’s rather picky. The Caps took care of business, putting Florida behind the eight-ball early and not letting them get a glimpse of the other side of it until the very end of the game. It was a simple case of kicking a cat when it was down. It’s something the Caps fail to take advantage of too often, but tonight, they made life difficult for a weakened team playing on fumes. By the end, the Panthers looked as if they just wanted to get off the ice and go home.
Posted by The Peerless at 12:18 AM No comments: