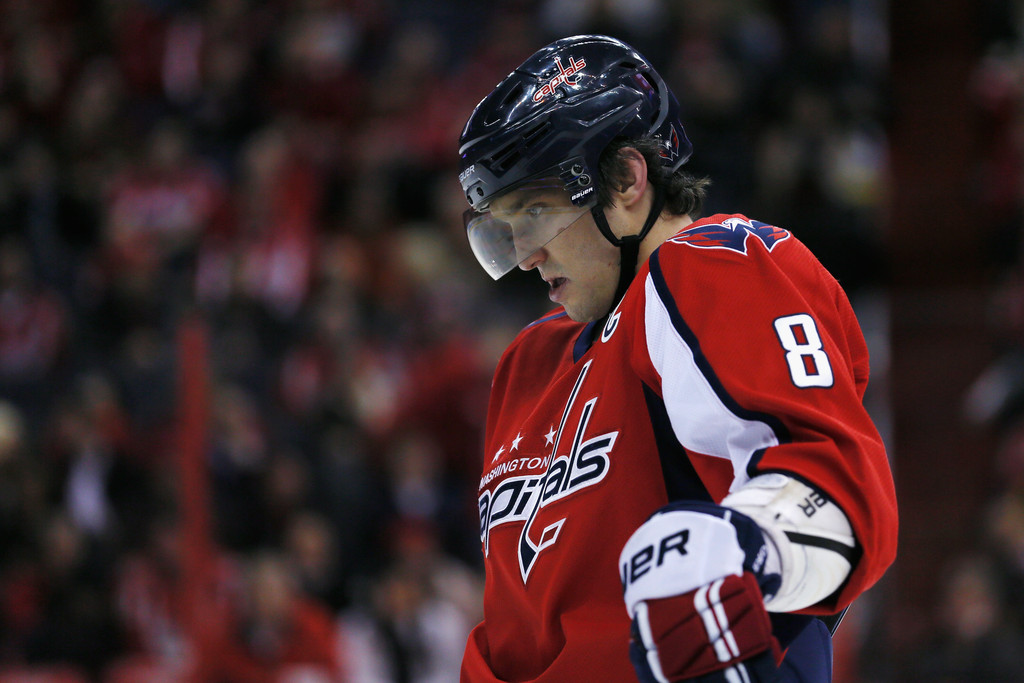 We are at that point in the season where we look back at the games that mattered this past season.  Since there was no full 82-game season, it would be hard to find ten games that mattered as we see it.  A six-pack looks about right.  So let’s get right to it…

The Background:  After waiting four months to start their season, the Capitals laid an egg in their first three games of the new season.  They were neither scoring goals (six in three games) nor preventing them (14 goals allowed).  It was a team that was, as one might expect with a new coach, sorting things out.

One of the things Adam Oates was sorting out was the top line.  Over the first three games, he mixed up his centers (Nicklas Backstrom and Mathieu Perreault getting time) and his left wings (Marcus Johansson, Matt Hendricks, and Wojtek Wolski earning minutes).  The constant was on the right wing.  There, it was Alex Ovechkin playing a position he had not played over any significant minutes in the NHL.

The erstwhile left winger did not take to the switch like vodka to ice.  Over those first three games Ovechkin recorded only one assist in 70 minutes of ice time, and that one was a secondary assist in a 4-2 loss to the Winnipeg Jets when he circled out from behind the Jets’ net on the left side, feeding Nicklas Backstrom, whose shot was deflected off Matt Hendricks’ skate for a goal.

Maybe this whole Ovechkin-on-the-right-side thing was an experiment that was not going to yield results.

Why it mattered:  Seventeen seconds into their fourth game of the season -- at New Jersey on January 25th -- Alex Ovechkin took the ice, this time once more as a left wing.  He did not do it with Nicklas Backstrom or Mike Ribeiro at center, with Troy Brouwer or Eric Fehr on the right wing.  He took the ice with Joey Crabb on the right side and Jay Beagle centering the line.  It was hard to tell if Ovechkin was being demoted or his two linemates were being promoted.

Maybe it was to make a point.  It was a not too subtle way of saying that returning to the comfort zone of the left side would come at a price.  Eleven of his first 13 even strength shifts came skating on a line with Crabb and Beagle.  As one might expect, Ovechkin did not record a point.  He recorded only one even strength shot on goal, and that one came when he shared a line with Backstrom and Brouwer just after a Capitals power play concluded.

It was not entirely an object lesson.  Oates thought enough of trying to win the contest by putting Ovechkin on a line with Backstrom and Joel Ward at even strength for late shifts in regulation.  It might have paid off had the Caps won the game in overtime, but Ilya Kovalchuk put an end to that thought when he scored with just 21 seconds left in the extra frame to deny Oates his first win as head coach of the Capitals.

The Takeaway:  It was not the end of the lesson.  In his next game Ovechkin took his first shift with, again, Crabb and Beagle, but that shift turned into a power play just 13 seconds later.  Ovechkin did not get his next even strength shift until there were more than five minutes gone in the game.  He logged a lot of even strength time for the game; his 15:39 was more than any Capital forward except Nicklas Backstrom and Jay Beagle.  Joey Crabb skated only a minute less than Ovechkin at even strength (it was part of his highest ice time finish of the season, the only time he cleared the 15 minute mark).

This game ended better for the Caps, the good guys winning by a 3-2 score and giving Oates that first win as head coach.  Ovechkin even scored the game-winning goal, that one coming on a power play.  It was not the end of the lesson, though.  Ovechkin would skate on a line with Beagle and Crabb in the next game, a 3-2 overtime loss in Ottawa.  He finished with no points and only two shots on goal, only one of them at even strength, that one in the third period moments before the Senators tied the game, 2-2.

The experiment – or the object lesson, if it was that — lasted one more game.  It was another two-shot/one at even strength result (his lone power play shot was a goal).  And, it was another Caps loss, this one a 3-2 loss to the Toronto Maple Leafs to push the Caps’ record to 1-5-1.  That would be it, though.  When the Caps took to the ice on February 1st against the Philadelphia Flyers, Ovechkin stepped onto the ice for his first shift 1:04 into the game with Mike Ribeiro and Wojtek Wolski, a line resembling more a scoring line with which Ovechkin might usually be placed.

The point was made.  It was a bit like watching the hockey version of the movie “Hoosiers,” the early scenes when coach Norman Dale has a player pushing back against his philosophy.  The player wants to do things his way, they way he did them in the past under another coach.  Dale benches the player, and even when the team is left with four players on the court after a fifth fouls out he does not put the benched player back in the game.

Maybe it was a case of Oates wanting to get Ovechkin skating with what he called “north-south guys.”  Then again, it might have been Oates making that point with a player who was pushing back.  Some might have argued that Oates sacrificed wins to make that point.  In the four games that Ovechkin skated primarily with Jay Beagle and Joey Crabb at even strength he managed five shots on goal (no goals) in 60:30 of even-strength ice time.  The Caps went 1-2-1 in those games.  But starting on February 1st, the Caps went 26-13-2 over the rest of the season while Ovechkin went 30-23-53, plus-5 in those 41 games.

Unlike the Hickory Huskers of fiction, the Caps did not win the big game in the end, but Adam Oates bringing Ovechkin around to his point of view and helping restore Ovechkin to something resembling his early career offensive production is a valuable outcome of this season.  It is one thing that the Caps have in the bank as they look forward to their 2013-2014 season.  And that is why that game back on January 25th mattered.


Photo: Rob Carr/Getty Images North America
Posted by The Peerless at 8:27 AM No comments: