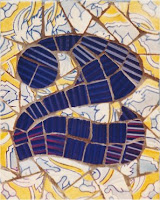 Well…as pre-season games go, tonight’s 5-2 Capitals win over the Carolina Hurricanes was entertaining. But let’s not delude ourselves that this was either: a) indicative of the relative strengths of these two teams, or b) that the Caps played well. But, it was a chance to look at some youngsters, a chance to put a few vets in roles they don’t normally play, and a chance to reminisce about the sort of crowd that would frequent (for lack of a better verb) games last December. Some thoughts on the game…
- Official attendance: 13,266. Uh-huh…a lot of season ticket holders didn’t brave the weather. There might have been 8,000 actual bodies.
- We could sit here and type that Michal Neuvirth had a difficult game (which would be true in many respects), but we’ll give him credit. He gave up two goals on the Hurricanes’ first seven shots, and he was fighting the puck for most of the 40 minutes he played. But he dug his heels in after the second goal and kept the Hurricanes from scoring again. Yeah, if Rod Brind’Amour or Eric Staal were out there, and this was January? Neuvirth would have been lit up like the Las Vegas strip. But this night, against these opponents, he stuck it out. We’ll give him marks for that.
- Chris Bourque is light years better – if this night was any indication – than he was in previous stints here. In visits past, he’d skate around like a water bug, full of energy, but with no discernible purpose. Tonight, he was a lot more in control of his game, finding the open spaces to get shots off. And for someone of such short stature, he took a hit well with his low center of gravity. Only Alex Ovechkin and Mike Green had more power play time.
- Tim Conboy…three minor penalties for roughing. If it wasn’t for his being utterly obnoxious, you’d never have known he dressed.
- OK, so you’re Daniel Manzato. You’re a young goalie coming into the game mid-way through the second period. You’ve played only one game above the ECHL level in your career. And the first shot you face from an NHL player is a penalty shot…and it’s Alex Ovechkin doing the shooting. Wes Craven can’t gin up a plot as horrifying. And the results were just as predictable.
- Speaking of Ovechkin, having notched the penalty shot goal and an assist on the first goal of two by Michael Nylander, he was trying to set up anyone wearing a red jersey, passing on a number of open shots. Failing to get anyone to finish his passes, one could almost hear him say, “enough of this crap (or whatever the Russian equivalent is),” and just fired the puck in himself on a set play from a faceoff.
- Was it me, or did Chris Clark look like he played with a smile on his face all night (except when he was staring over at Conboy with a look that said, “what the #@$& is your PROBLEM, pal?”)
- I don’t think you could get Daren Machesney to settle down if you bolted him to the ice. He was a bundle of perpetual motion out there. Given that he faced only three shots in 20 minutes, he probably needed to do something to keep himself occupied.
- In the NHL scoresheet, it’s “Joshua” Godfrey, in case you were wondering.
- It is entirely possible that the Hurricanes started only one forward who will start on opening night (Patrick Eaves).
- Carolina had only three shots on goal in the last 23:30 of the game.
- Alexander Semin had several puck-handling displays that might be SportsCenter-worthy…none of them resulted in a goal; few of them resulted in a chance. He looked like he was holding onto the puck too much and too long.
- We sat there for most of the game fretting…”Mike Green could easily get into bad habits with the sort of game he had tonight.”
- But speaking of Green, he logged 5:49 of penalty-killing time tonight. That would be about 20 percent of all the time he got short-handed last year. Alex Ovechkin had 4:48 on the penalty kill…he had a total of 13:09 last year. Enjoy it now boys…
- In the first intermission, with the Caps trailing 2-0, the Caps ran a text-message ticker on the big screen. One message said, “it’s not over until Brooks Laich says it’s over”…guess that person knew what they were talking about.
…Brooks sez, it’s over.
Posted by The Peerless at 12:02 AM 2 comments: