Countdown to Opening Night by the Elements: Number 4

Four left for Fearless’ fearless foray into the elements of the periodic table, which brings us to… 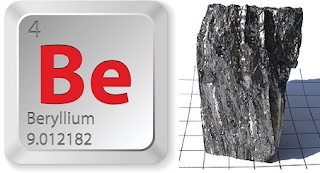 Beryllium is an element you are not likely to find in these parts…or any parts, actually, either on earth or in the universe.  Even its ultimate manufacture is a rare event.  It is produced in stars, but it exists only briefly, destroyed by subsequent nuclear fusion in a star’s interior.   By the time a star matures, perhaps only 15 percent of the beryllium it produced is still around.

Here on earth, beryllium exists only incombination with other elements in minerals, often in gemstones such as emeralds or aquamarine (forms of “beryl”).  It possesses an odd physical characteristic in that sound is conducted unusually fast in it, a product of its low density.

Its history begins in Egypt when it had applications as the mineral “beryl.”  In first century Rome, Pliny the Elder made the link between beryl and emerald, noting their similarities.  Two centuries later, the Greeks made progress in producing artificial beryl.

It would not be until the late 18th century, however, that more sophisticated chemical analysis could be performed on the substance.  Chemists in Germany and (yes) Sweden performed experiments on beryl and emerald that yielded consistent, if false, results.  They thought that they found silicates of aluminum, not a distinct element.

At the dawn of the 19th century, Louis-Nicolas Vauquelin subjected emerald to his own chemical analysis, dissolving aluminum hydroxide from emerald in an alkali solution.  He was left with a new earth that he named “glucine.”  Why?  Because he tasted it (idiot) and found it to be sweet, like “glucose” (sugar).  Martin Henirich Klaproth, one of the early experimenters who thought he had aluminum silicate, thought a better name would be “beryllina,” perhaps named for his daughter (no, not really).  Friedrich Wöhler put an end to the nonsense and finally called the new element “beryllium.”

Today, most applications for beryllium are military in nature, but it does nave limited commercial applications.  Those would include its use in x-ray applications. However, because of the need for extremely pure samples, it is very expensive.  It is also used in particle research, its low density being a benefit to minimize interactions with particles that researchers wish to study.

It has applications in rocketry, primarily in the manufacture of rocket nozzles, and in other aerospace sectors because of its structural stability.  One of the more exotic applications is in weather satellites where its low density and structural stability make it uniquely capable for use in large-area mirrors employed in such satellites.  It is an element in the manufacture of tools used in the disposal of explosive ordinance, since it is non-magnetic (many explosive devices have magnetic fuses).  Closer to home, or at least your home, it occasionally shows up in top-of-the-line audio speaker equipment.

What we have is an element that is short-lived, has some rather specialized uses, is found in gemstones, is characterized by high sound conductivity, and is low in density.  It sounds a bit like a player who might not have been around these parts long, had special talents on special teams, is slight of build, but who “conducts sound” by mouthing off on occasion to officials.

Beryllium… the “Mike Ribeiro” of the elements of the periodic table.

Posted by The Peerless at 6:35 PM No comments: